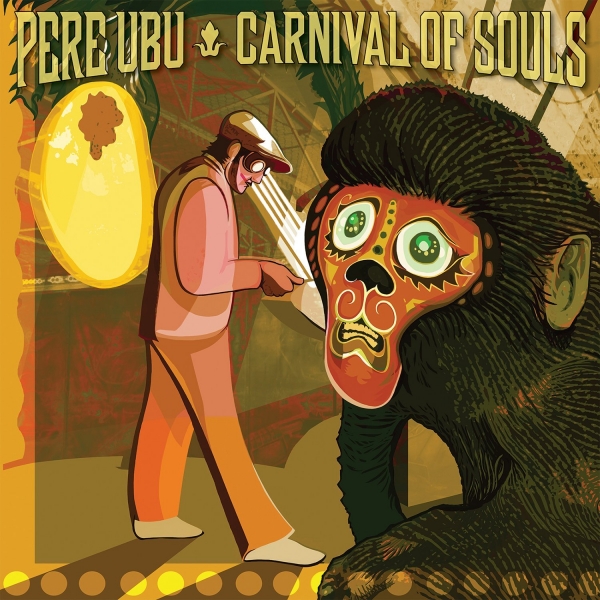 It doesn’t really matter how you find out about Pere Ubu, because once you’ve heard one of their records, you’re unlikely to forget them in any old hurry. Pere Ubu are, quite simply, amongst the very finest of post-punk acts and have the requisite back catalogue and iconic frontman to set them apart from ‘the bunch’ (see also Bauhaus, The Teardrop Explodes.) Since that handy genre-tag was killed by White Lies not so long ago, we’re left with what remains of a ‘ post-punk band’ that has transcended both their given genre and their chosen style – the Pere Ubu you’ll find on Carnival of Souls isn’t the same band you’ll find on The Modern Dance, Dub Housing, The Tenement Year or even The Lady From Shanghai.

The album opens with the terse, rigid throb of “Golden Surf II”, where atonal, dissonant crashes and off-kilter electronic squeals colour the album ‘intense’ from the get-go. There’s no breathing room before the raging sibilant opening of “Drag The River”, which is one of the best cuts on the album. The cymbal crashes lay waste to the listener’s mind, allowing Thomas’ deranged poetry to seep in unchallenged. The brain-frying intensity (and sonic terrorism) of following number “Visions of the Moon” invokes a very laborious (I wouldn’t necessarily say ‘bad’) acid trip, if the chosen setting for said trip were some post-industrial shithole (pardonnez mon français). The album gets weirder from there on out: The scraping, chopping riff of “Bus Station” is positively nerve-shredding; the haunting “Road To Utah” is halfway between Tom Waits’ broken-gramophone fright-fests and Faust’s broken-headed eerie psychedelia.

“Carnival” is Strange Days of the 21st Century, all fairground organ and slinky guitars, while the relatively sedate ‘ballad’ “Irene” soothes and teases the listener endlessly. The final track, “Brother Ray” (natch) is a behemoth of a track – coming in at a hair over twelve minutes, it burrows into the listeners’ psyche with a disturbing ease. We find Thomas in fine voice, growling and cajoling and chatting his way through the juggernaut of freak-out-inducing empty sonic space whistling around him. If you’ll indulge me a brief anecdote that shows just how involving this album is, I listened to it twice before I’d even realised it was time to stop. “Brother Ray” just folds back in on itself to become “Golden Surf II” all over again – such is the completely mesmerising palimpsest of a record I found myself in the midst of.

This album, much like the majority of their canon, is superb. Ratings and critical words are totally unnecessary at this point: This is a Pere Ubu album. It is exactly what you expect and exactly what you don’t. The variety and subtlety and diversity and ferocity of this collection defies belief, much like their last, fantastic record. The value of the name ‘Pere Ubu’ and the artistic, iconoclastic nature of David Thomas have never been more potent. Put simply, we need Pere Ubu more than they need us, and isn’t it amazing to have them here, now, firing on all cylinders? For my money this is as fine a record as you’re going to hear this year, so hop to it.