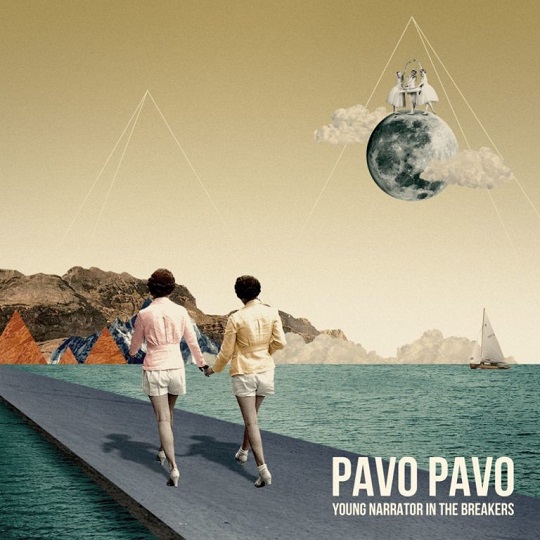 There’s always been a history of bands forming at university, where the narrative of musical history is absorbed by musicians in love with possibilities of artistic expression.

It’s at this point bands either remain wedded to the music that’s preceded them or try and create something new with the structures of the art-form. Formed whilst they were studying at Yale, Pavo Pavo belong in the latter category. On Young Narrator in the Breakers they write a love letter to music using a variety of sources – including ornate orchestration and harmonies but also disco and funk - and give it their own spin.

All five of Pavo Pavo are songwriters and the record combines their individual ideas as a collective voice. From its initial synths and Eliza Bagg’s angelic vocal, opener “Ran Ran Run”, sets the scene for what’s coming. Amid a lush musical landscape, Oliver Hill’s vocal appears and the song changes to a beat-poem set to a disco beat. Its two songs seamlessly fused into one, as Bagg returns to sigh the tremendous line “Time is a hole in my waterbed, some kind of cardinal sin, tomorrow I might be sleeping in.”

Given their unabashed preppiness, the song-titles reveal a love of literature - “A Quiet Time With Spaceman Sputz” and “Young Narrator In The Breakers” sound like the names of Kurt Vonnegut or Phillip Roth novels. They've also got a song named after Woody Allen’s Annie Hall on which the vocal harmonies come to the fore, evoking Pet Sounds, be that “Caroline No” or “Don’t Talk (Put Your Head on my Shoulder”). “Ruby (Let's Buy the Bike)” mixes a cacophonous guitar riff with layered harmonies, with each of them doing different jobs, not unlike Crosby, Stills, Nash & Young did with Déjà vu’s “Carry On.” The albums highlight “Wiserway” is similarly expansive, recalling Air’s “Playground Love”, yet retains an endless hope in the feeling of the music.

As important as the harmonies are, their inventions in sound are equally so, with a mix of strings, funk and synths lending the music a depth and richness. “No Mind” is built on a funk bassline and includes a spoken countdown of “On Sunday… on Monday… on Tuesday” over a groove that belongs on the dancefloor.

Young Narrator in the Breakers isn’t shackled with deference or reverence. It balances musical intelligence with elegance, orchestrated chamber music with disco and in doing so shows a band in possession of not only a brilliant record collection, but the imagination to transcend it.