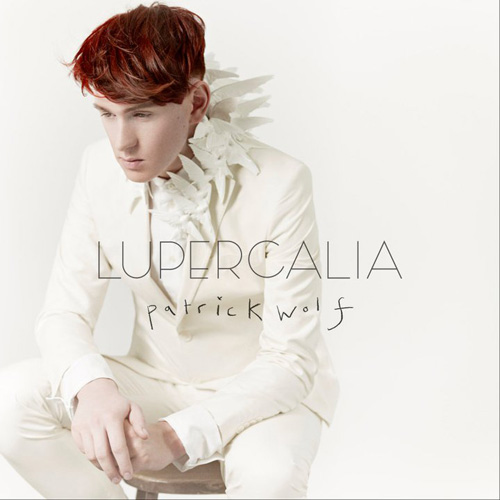 Have you heard? Patrick Wolf‘s in love! Gone is the smudged eyeliner, the peroxide locks and leather bondage gear – The Bachelor is getting hitched! If the giddily tweeted engagement announcements didn’t clue you in to Patrick’s recent romantic fortunes, maybe the video for lead single ‘The City’ might – featuring Patrick gleefully pirouetting around on a sun-soaked beach, gambolling in the waves and grinning at the camera under a coiffed crimson fringe like the human personification of pep, it’s the single most joyful spectacle I’ve seen (or heard) this year.

And testimony to this newfound joy is Lupercalia. The whole gorgeous affair kicks off with the four minute pep-rally that is ‘The City’. It’s an exhilirating, blustering major key affair, featuring rolling, hammered piano chords and a pleasingly ritzy sax solo, it’s pure schmaltz, pure exuberance –  at one put he even hollers “Take you in my arms and wish you top! top! top! of the morning!” – as an Irish person who would inherit a small fortune if given a penny every time the urge has been suppressed to sock every smug so-and-so who dares to utter this reputation-ruining piece of nationalistic triteness, it goes against every bone in my body to approve of a song containing the dreaded cliché – but I do. In fact, I adore it.

Speaking of clichés, Lupercalia is riddled with ‘em – ‘The City’ finds Patrick prattling on about the “key to his heart” and kissing on top of niagara falls, the swooning ‘House’ finds him reprising the old adage “only love makes house a home”, ‘Slow Motion’ likens the transforming properties of love to “the kiss of life” over fittingly disneyish strings, while ‘Together’ pits rousing, “we can do it so much better/together” sentiment over tiering strings and a twitching, itchy disco pulse in a glorious amalgamation of Patrick’s baroque and electronic leanings.

But no matter how trite, opulent or downright ridiculous the lyrics or instrumentation, Patrick’s strength of conviction never wanes – even the obligatory paeon to separation ‘Time of My Life’ manages to keep its head held resolutely high – Wolf choosing to bypass all the pain and misery that comes as an unfortunate package with the end of a relationship, instead choosing to focus on the catharsis, the in-your-face triumph of being ‘happy without you’.

And in the end, it’s Patrick’s ceaseless, unerring romanticism that transcends Lupercalia – it’s far too easy to feign moodiness, disaffection or despair, to maintain a facade of sophisticated sulkiness that hints at hidden depths never actualised, excuses a lack of any real emotion and artfully strikes chords with overgrown adolescent critics everywhere. It’s ten times braver to embody the kind of unfettered bliss often snobbishly dismissed as mindlessness – but when done right (like on Lupercalia) this starry-eyedness, the heart-swelling, knee-knocking, flustering flushes of love can be the most wonderful thing of all.