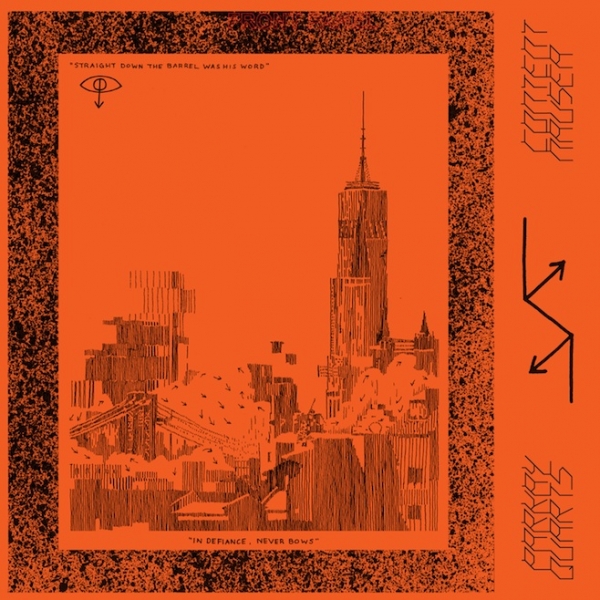 Over the past few years, Austin Brown and Andrew Savage have been nothing if not prolific. As part of bratty New York neo-punks Parquet Courts, they’ve rapidly built up a sizable back catalogue, releasing at least an EP’s worth of material every year since unveiling their little-spoken-of, seldom-heard debut album proper, American Specialties, in 2011. And still, as we enter the dog-end of 2014, it seems that their voracious appetite to record cannot be satisfied. Not even the temporary loss of their rhythm section (bass player, Sean Yeaton and Savage’s brother, Max, on drums) to the respective responsibilities of completing a degree and beginning a family- enough, surely to derail many a band- has managed to impact too greatly upon their creative energies. Shed of their rhythmic half, the two have instead assumed the Parkay Quarts moniker (the very same name that adorned last year’s fabulous Tally All The Things You Broke EP), for Content Nausea, their second outing of this calendar year and show no sign of slowing down on what they’ve labelled an ‘in between albums album.’

With the snotty duo seemingly never out of the studio, you’d be forgiven for thinking that the choice of title is a neat little meta-commentary on the ever-moving, hardly-static songwriting impetus of the men at Parquet’s core. In terms of opener "Everyday It Starts", this assumption really isn’t very far off the mark. Possessing all of the hallmarks of a classic Savage-Brown composition-  the thundering bass, the jab and throb of competing guitars, the bleak Blank Generation lyrics- the song bemoans the pressure they feel to surpass their own high standards. And I never sleep/But I go to bed, shrugs Brown in his familiar deadpan, lamenting a life spent eternally producing and never allowed to switch off, forever trying to write the next "Master of My Craft". Even from the comfort of his sheets.

Taking the song at this purely autobiographical level, it’s fun to imagine both Brown and Savage between the bedclothes in the dead of the night, light sourced from cigarette lighters, waiting with tattered moleskines and half-chewed pens at the ready, searching for inspiration. Sure enough, by the time the album’s title track rolls around, romantic hipster songwriting imagery aside, they find it. And how. A mile-a-minute spoken word protest comparable in pace and content to the breakneck Beat poetry of Bob Dylan’s "Subterranean Homesick Blues", "Content Nausea" sees Savage, like his counter-cultural antecedent, shout out his disregard for homogeneity and capitalism’s endless, mindless produce over an urgent bluesy architecture. Not once taking the time to pause for breath.

"Pretty Machines" and "Psychic Structures" also run along similar themes, admonishing the "worship of illusion" and the inevitability of being "overtaken by fear" as frenetic saxophones and distorted guitars soundtrack the slow spiral into doom. For a duo that have so frequently read from the Ramones-Casablancas lyric book and consciously opted for ambivalence over action, the loaded observations that spill from their mouths as quickly as their saliva on these tracks, is refreshing. No longer are they content to stew in impartiality, they are ‘landmines’ just waiting for the right moment to explode.

The music itself is, in truth, not all that much of a departure from the trademark spiky, speedy post-punk that found a home on Light Up Gold and Sunbathing Animal. But the album’s covers, something hitherto avoided, offer a little respite from the repetition. The first of these, "Slide Machine", taken from semi-obscure acid band 13th Floor Elevators’ sophomore effort, enshrines a mellower hue to original vocalist Roky Erickson’s deranged howl. It’s not the drug-incurred freak-out but, rather, the reflective, sombre comedown that the duo capture here. Some would argue, with knowledge of Savage and Brown’s heavy debt to hazy garage acts, this cover choice uninspired but the second, an unexpected and possibly-inebriated reimaging of Nancy Sinatra’s "These Boots Are Made For Walking", limits such cliché and is an equally intoxicating listen that shows off some unlikelier influences. Last to reach the ears is the dusty, slowed-down "Uncast Shadow of a Southern Myth", a blood-stained American Gothic tale- that already shared online to tease the album’s release- closes Content Nausea on the same downbeat note as Sunbathing Animal’s most honest and emotionally resonant song, "Instant Disassembly", proving that beneath all of their arty noise and, lies an immutable sensitivity and grace.

Increasingly astute at documenting how it feels to live inside our hyper-intense, instantly-gratifying and mind-numbing fast-food culture, Savage and Brown’s nausea is a sickness that we all share. Their record's the closest thing we have to finding a cure.