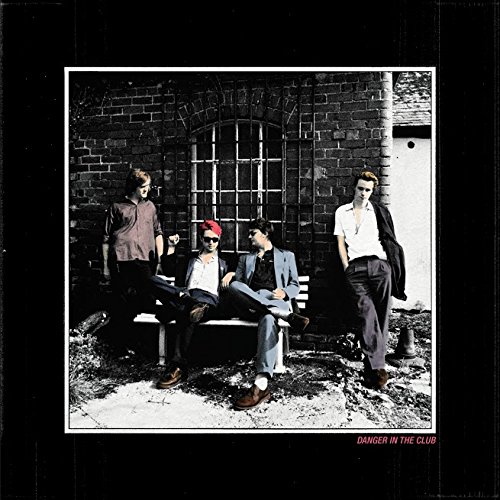 At the outset of Danger in the Club’s rambunctious sixth track, “Secrets of America”, there’s a gallop-like drum beat. Akin to that so iconically heard on The Clash’s version of “I Fought The Law”, it’s just one of numerous signs of Palma Violets’ deeply ingrained punk mentality. Their latest LP sees it advance from the ramshackle rowdiness of debut album, 180, to something altogether more streamlined, more sophisticated even. Sure, there’s still chaos aplenty, but it’s been brought under control.

Danger in the Club’s eponymous lead single dropped to a less than ecstatic reception. Indeed, it is something of a sonic hodgepodge of songs within a song, but it couldn’t be more at home on a record characterised by the Londoners’ unique, disjointed congruity – on paper it shouldn’t make any sense, but in practice it absolutely does. The key-laden intro; the bellowing vocals; the impromptu harmonica solo; it may not have been a hit single, but it’s the perfect snapshot of what this album is all about.

Palma Violets aficionados heading into Danger in the Club with an air of apprehension will have any fears well and truly dispelled by track three, “Girl, You Couldn’t Do Much Better (On the Beach)”. It’s little wonder this one featured on set lists earlier in the year, long before the announcement of the album. Bouncy, boisterous, and just a hell of a lot of fun, it’s oozing with the upbeat vigour of the Palma Violets of old. With stick work – and last we saw of him, hair – of which the late Tommy Ramone would have been proud, it’s the turn of Will Doyle to assume the role of lead punk.

That rebel mentality comes to the fore once again on “Gout! Gang! Go!”, a track as unruly as its overly punctuated title would suggest. With a high-pitched, drawn out “Oooh yeaah”, the supercharged frontman partnership of Sam Fryer and Chilli Jesson launch into this record’s wildest number. Dotted throughout with assorted yelps and whoops, and with Fryer’s jangling riffs partnering with Pete Mayhew’s stellar keyboard skills to create a riotous energy, it’s one that’s sure to send the pints – and bodies – flying next time the boys hit the road.

Mr Mayhew may play his part in instigating the chaos there, but he’s commended with a song of his very own a couple of tracks later. Whilst perhaps not as malevolent as its name would have you think, the Sam Fryer dream-inspired “Peter and the Gun” packs one hell of a punch. A five-minute epic driven by the Fryer-Jesson vocal tandem, lyrics of inane 21st Century tendencies – “I was searching for my house on the internet” – juxtapose with its overall retro sound to serve up another sweet slice of Palma Violets cool. There’s a real party atmosphere about this one as all members let loose in their respective roles as it builds to a raucous climax.

Those familiar with Palmas’ debut and their infamous live shows will be well acquainted with their fondness for the grandest of finales. On 180, and at many of the gigs following that record, it was up to sprawling epic “14” to do the job, and Danger in the Club’s equivalent comes in the form of “English Tongue”. Another gradual builder, layer upon layer of folk infused rock ‘n’ roll is added to bring a triumphant album to a glorious end. Sprightly multi-instrumental jamming and fervent chants of “Everybody knows just who I am” round off the rowdy Lambeth lads’ sophomore outing. Never has Fryer so expertly channelled Joe Strummer, his gruff, thickly accented tones ensuring Palma Violets’ punk exploits hold up until the very end – it’s as apt a finale as they could possibly have envisaged, and it might just be the standout moment on a record packed full of them.