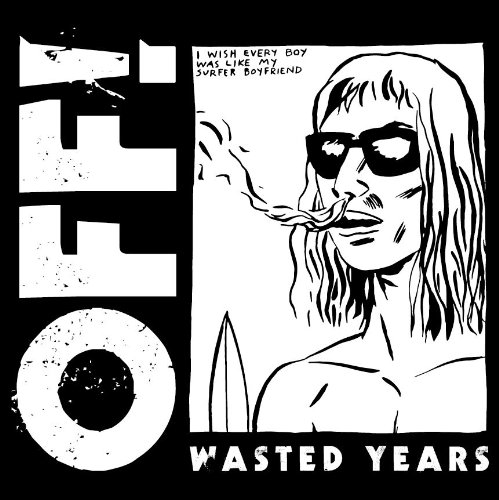 When it comes to supergroups, the use of the word ‘super’ has been as questionable as its association with Superman Returns. For every good (The Traveling Wilburies, specifically Volume 1) there are ten bads (the Mick Jagger and Joss Stone featuring SuperHeavy, for one) and even more uglies (McBusted, anyone?). OFF!’s four members were already part of their own acts (all around the hardcore punk area), before forming in 2009 and recording their debut, self-titled album in three days in 2012. At just 15.44, the 16-song collection featured punches and blows to knockout their listeners. It’s a technique that can often be the case for the genre, but here (with four egos from their own four camps) it’s intensified so much so that the 3-minute pop song feels like a tradition from a different universe.

Comprising of Dimitri Coats (Burning Brides, among other Chris Cornell and Guitar Hero based projects), Keith Morris (Circles Jerks/Black Flag and frontman for Red Hot Chilli Peppers for one night only), Steven Shane McDonald (Redd Kross, and Tenacious D’s debut) and Mario Rubalcaba (many bands including Rocket From The Crypt and Hot Snakes, and ex- professional skateboarder), OFF! don’t change tact with their second album. Wasted Years – once again produced by Coats – is built up with suckerpunches of song, with only one making it past the two-minute mark, and most staying below one minute thirty. What does this say about the genre in comparison to, for example, chart pop? Are punk fans more impatient; always craving all of the song, rather than the elements that make it? Or perhaps the band are more efficient, cutting out unnecessary introductions and fade outs for the essence of the track, and the message that comes with it.

And despite their miniscule length, there are messages to be taken away. In “Red White And Black” the line “your possessions can be repossessed” resonates, when it’s easy for those looking from the outside to view the genre as inaudible screams. (Although, naturally, there are moments that aren’t quite as easy to break down.) The track chugs to the closest they come to a breakdown, when for other acts it may be the all guns blazing middle-8. What appears to be a political attack fuels the majority of the lyrics: “Stuck in a violent culture; they’re circling vultures who were overrun by the uninformed” from “Legion Of Evil” doesn’t hold back, before referring to a “human ashtray, welcome back!”. In “Over Our Heads”, OFF!’s view on war is made clear: “49 killed but that’s OK, we’re miles away”. Musically, as with “Legion Of Evil”, the chord progressions aren’t too dissimilar to our own punk heritage, with hints of Sex Pistols creeping beneath the grunge.

Despite all of this though, the tracks begin to sound the same. Taking into account their length, this could be the bones of the sort of rock opera Townsend is known for (or a heavier approach to Side B of Abbey Road). Introductions to tracks have you wondering whether you’ve accidentally hit repeat, making OFF! a difficult act to play “Guess The Intro” to, yet odd moment offers a little difference, with “It Didn’t Matter To Me” providing something less lyrical but more rhythmical. Wasted Years is unlikely to appeal to a whole new legion of fans, but those already on-board should be happy with their order of ‘more of the same’. And as for the rest? The line used to open “Exorcised” probably voices the band’s opinion best: “Today’s a good as day as any… to tell you to get fucked!” …Punks.