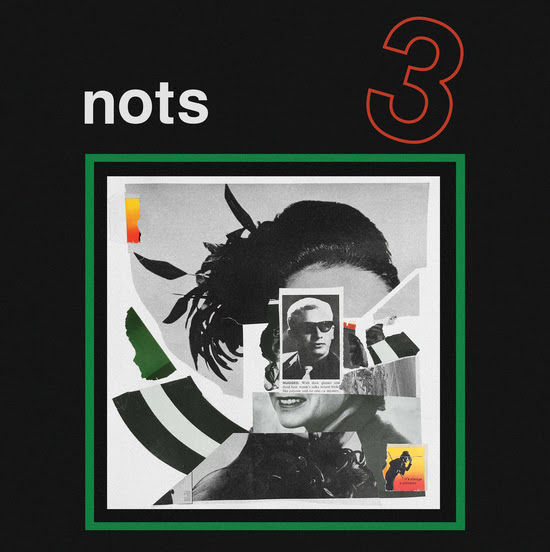 While the trio steers us through a dizzying scurry of rock anthems, the group continues to expand their range. By harnessing their roots that made their debut LP, We Are NOTS, so celebrated, 3 finds the group adhering to a similar framework with its ten tracks. Nots underpin their hook-driven racket with themes of decaying existence and what it means to reemerge on the other side, liberated and ready for a fight.

Those of us touched by punk music and its culture acknowledge the ways its shaped our psyches – its lifestyle has the ability to grab hold of us, reshape perceptions and influence how we choose to exist. Oftentimes fueled by positivity, ways to abolish corruptness, and a desire for change, punk as a genre has the ability to elevate its followers where they, too, can become advocates for its growth. This disposition encompasses Nots’ music – from the lo-fi fuzz taken from their debut 7” and up until now, Nots honor tradition and pay homage to it.

The bustling “Low” leads us in with its quick-paced energy and gnarled hooks, coated in layers of hiss while Natalie Hoffman’s voice edicts a charge. But this diagram isn’t new for Nots. With a primarily fixed agenda, the trio never find themselves skirting too structurally into the unknown, and truth is…they don’t necessarily need to, at least not yet, but one thing’s for certain: it’s hard not to fully envelop yourself in Nots’ snarling dynamism. Tracks like “Woman Alone” continue the trend, serving as a rapid spitfire highlight, one that’s feverish and unhinged whereas “Rational Actor” dredges along with its raunchy bass lines and swirling post-punk bliss.

But certain songs like “Floating Hand” encapsulate everything we love about Nots and what they bring to the table. Its frantic vigour chugs along where it almost casts a spell – its laser prods, reminiscent of Love is All, scamper around before the trio unleash into a full-fledged mind warp, a punky garage ode if there ever was. “Surveillance Veil” abides to a similar framework, radical and an embodiment of punk temperament. But while Nots can easily saunter into about any category within the punk milieu, they can also gravitate into new wave and elements of synth-pop – those, or even Hoffman’s definition of “weird punk” that she coined on a live television broadcast.

Realistically, Nots span a little bit of all the aforementioned and that’s partly why they continue to be such a talked about act. LP highlight “Half Painted House” gives 3 its deserved edge – a quintessential punk declaration dedicated to feeling lost and suffocated in one’s monotonous routine and structure and how to essentially cope with its potential devastation. The rambunctious “Built Environment” concludes 3, leaving us with something to reflect on: the idea that Nots continue to propose what it means to maintain a punk utopia on the forefront as well as a reminder that although during arduous circumstances that weigh on our minds and throughout all the tension and baggage we carry, we collectively have the ability to release, to conquer, and fight for an evolution no matter how small.