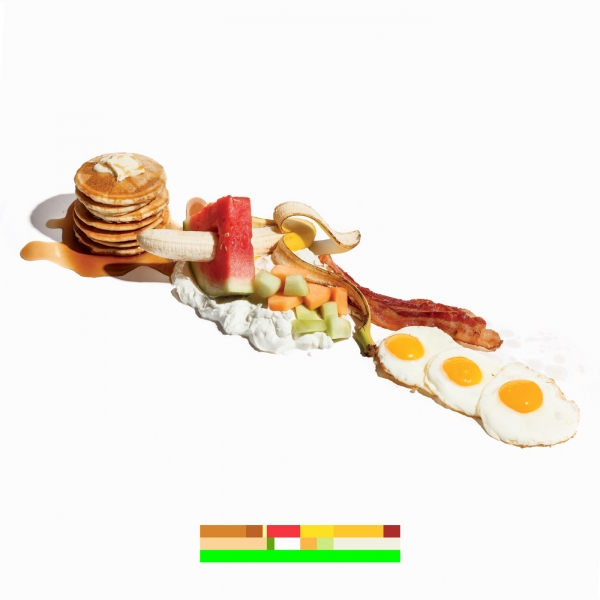 If the phrase “we eat with our eyes” could be applied to record sleeve design then La Di Da Di (with its bright depiction of breakfast foods and fruits), hints at a record of sweet and playful aural delights - full of depth, texture, flavour and most importantly enjoyment. But what if the eyes deceive? On Battles’ third full-length studio record, sustained and enjoyable aural nourishment comes hard to find.

It is hard at times to pinpoint the exact problems within La Di Da Di. Sonically it is reminiscent of Battles’ early EP C/B EP. Yet La Di Da Di lacks the startling, crazed invention that oozed throughout the 2006 release, and at times indulges in paint-by-numbers Battles’ arrangements and instrumentation. “Summer Simmer”’s stock opening rolling rhythms, for example, feels dated by way of Battles’ continual and playful innovation.

It would be harsh (and incorrect) to state that La Di Da Di solely follows a prescribed formula of how a Battles’ record should sound. But, when Battles do play with the listener’s expectations and blur the lines of who/what Battles are, the results are frustrating and at times surprisingly drab.

The sonic decisions and choice of arrangements employed to keep the listener on their toes conjure a frustrating conflict of emotions.This conflict is exemplified almost immediately within album opener “The Yabba”. Its opening, so gleeful and tantalising with its manic synth break grips the listener, expectant of the fury and the intricacy of Battles’ palette. Yet, instead of layers of complex instrumentation and textures, we are left disappointed by a turgid and quite frankly dull traditional rock/blues riff. Although playing with expectation, and adding new elements to one’s sound, can lead to wide-eyed wonder, the disappointment found within “The Yabba”’s opening statement overshadows much of the excellent technical work found later within the track. And by the time that Battles’ jaw-dropping, intricate excellence does emerge, it almost feels too late.

The wonderful and technicolor final minute of “The Yabba” epitomises La Di Da Di as a record built with much promise but only produces disparate flashes of brilliance and at points is weighed down by numerous ideas and melodies that not only fail to engage the listener but are also not worth their repetition and the looping processes that underline La Di Da Di. “Megatouch”, “Dot Net” and “Non-Violence” all contain hooks, which are simply not strong enough to validate their extended playtime and recurring motifs.

Looping State of Mind by The Field, for example, beguiled the listener into its repetitious grip. Its loops and textures served as a mazing path but with a distinct, clear vision of its effect on the listener. La Di Da Di’s loops feel repetitious not because of the obvious, but because they are at times directionless. The “techno thrum”, as Battles themselves have described La Di Da Di’s sound, is in no way the promised “mushrooming monolith”. A monolith should strike awe and potentially, fear. Tracks however like “Dot Net” are a pathetic semblance of the gargantuan, uncompromising structure it should be.

La Di Da Di is also littered with numerous, unmemorable interludes. In comparison to the insatiably short but impressively badass “IPT2”, or the alien-vocal melody of “Leyndecker” from debut Mirrored, the likes of “Tyne Wear”, “Cacio e Pepe” and “Flora > Fauna” fall dramatically short of the extremely high standards the band have set themselves, which up until this point, they have seemingly matched or exceeded.

The technical ability of Ian Williams, Dave Konopka and John Stanier however, remains unquestionable. Stanier’s drums in particular are given laser-beam focus and clarity, and his hits are as crisp and as furious as found in the live setting. On “Non-Violence” for example, he attacks his lofty cymbal with precision, creating a tsunami of percussion, and later carries “Tricentennial” with a flurry of tom rolls and fills. And while the preceding text has focused on the negative aspects of La Di Da Di, it must be stated that there are moments that will astound and raise a smile to one’s face - from intricate layers, so delicately poised (“Dot Com”); to monumental crescendos (the finale of “The Yabba”); and delightful hi-hat rolls.

Battles’ brilliance raises its head in the form of “FF Bada” and “Dot Com”. The former is a monster of a track that leaves one increasingly bewildered on each listen. Its arrangements morph vividly and unexpectedly, with finely picked guitars pirouetting gracefully amongst outlandish bass-horn stabs that add a new dimension to Battles’ sound. “Dot Com”, on the other hand, is an extremely groovy and playful number, conceived as the bastard love-child of “Tonto” and “Sweetie & Shag”, minus the distinctive vocal inflections of Tyondai Braxton and Kazu Makino. Closer “Luu Le”, furthermore, sees Battles playing with time and tempo to excellent effect.

In the build-up to the release of La Di Da Di, Battles released a mini-documentary entitled “The Art of Repetition” - apt for a record built upon the looping process. In an interview with The Quietus Factory Floor’s Gabe Guernsey once mused, “repetition is the platform for free thinking”. There is a mysterious truth to Guernsey’s statement, in particular with regards to the way we percieve electronic music. La Di Da Di however limits the potential for “free-thinking” with a series of stagnant, self-conscious ideas and motifs. Unfortunately, Battles have not mastered the art of repetition on La Di Da Di.