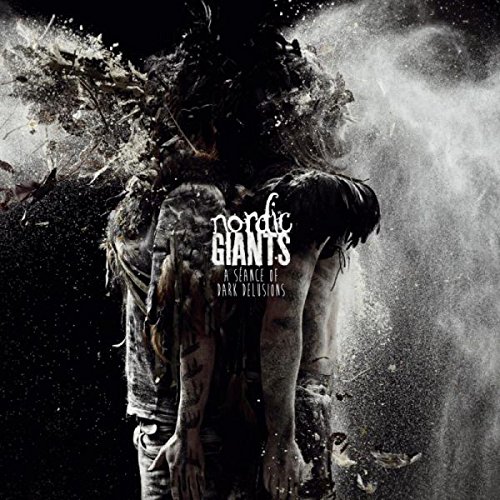 A formidable and intriguing cross between the extra-terrestrial and the instrumental, Nordic Giants have for years been consistently pushing the boundaries of what constitutes “normal” music (whatever that is anyway), and are finally coming out with a debut album laced with experimentation after lurking in the shadows for so long.

Released via progressive label champion Kscope, A Séance Of Dark Delusions goes someway to capture the band’s enormous live selling point that normally involves fantastical Middle Earth-like costume, filmic scores, accompanying AV projections and all manner of spectacles, which has made them a must see act on every artsy festival bill for a while.

Following their out of the ordinary approach, Nordic Giants are for the most part vocal-less, choosing instead to enlist the help of guest singers such as the transcendental Freyja or relying on the use of recorded samples in a similar way to concept band of the moment Public Service Broadcasting, in addition to simply sticking to trailblazing compositions in the vein of prog-rockers 65daysofstatic.

Whereas some would worry that recording would fail to capture the same magic of their live sets, instead this long playing studio version makes for just as intriguing listening, as the rulebook gets fully lost in expansive sonic fjords. It may sound like an airy-fairy treatment on paper, but in listening to the songs themselves, they're fully climatic with extreme highs and terrifying force throughout that translate to the recording superbly.

The choral tinged instrumentals such as "Elysian Dreams" and "Illuminate" are laid down against thundering epics like "Rapture" and "Futures Dark", where dizzying walls of sounds burst into ears like sonic booms. "Give Light to the Imagination" is a softer beast entirely, as lighter chords give an ethereal touch to the swirling soundscapes. Dorset outfit Saturday Sun also get a look in as contributors, adding some more masculine touches on the "Dissolve" odyssey. What doesn’t vary throughout is the duality that the band constantly plays with within the waves of aural washes. As a release it's cinematic, evocative and forever in motion as tempos, resonance and tone all are constantly tampered with.

For a band so cryptic and mysterious, A Séance Of Dark Delusions is exactly what it says on the tin, a mystical toe dip into outer and murky world of noise. Long live the experimental, where real artistry really lives and what Nordic Giants are able to capture so easily - even if it did take them an absolute age to get it together as an album.