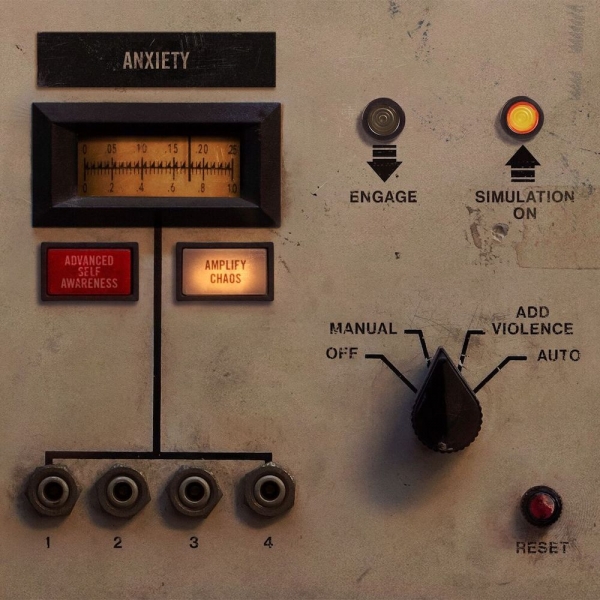 Whether or not he’d like to admit it, Trent Reznor must know that every new Nine Inch Nails release comes with a new pressure, one that he hadn’t had to worry about before 2009.

It’s for the same reason that he’s now directly comparable to James Murphy, who’s previously expressed an interest in collaborating with NIN but who, in stylistic terms, you can’t imagine Reznor would be predisposed to enjoy; Murphy’s appetite for frantic disco is a long way from both the near-nihilism of NIN’s darkest moments and the prickly, no-nonsense front that the industrial rockers’ lynchpin puts up in interviews. Nine Inch Nails and LCD Soundsystem have followed strikingly similar arcs in recent years, in that both made an enormous song and dance of the fact that thy were splitting up, and then reconvened within a timeframe that would probably have been accepted as a standard hiatus, if only they’d posited it as such in the first place.

The point being that every time that Reznor and his chief collaborator Atticus Ross release any new music nowadays, it has to be good enough to justify them touring the world under the banner ‘Wave Goodbye’, symbolically selling all of their gear off at the end of it, and then deciding within four years that actually, what the world needed was another Nine Inch Nails album. In fairness, that was just fine by both committed fans and casual observers alike, given that 2013’s Hestitation Marks was a strong, thoughtful effort that was by no means out of place in the NIN canon.

Since taking that on the road extensively with a typically stirring stage show, all we’ve had from Reznor and Ross is last year’s Not the Actual Events EP, which was surprise-released over the festive period. The band’s fanbase is a broad church and the catalogue is more than varied enough to ensure that every individual follower of the group probably envisions peak NIN as something different; some will love the oppressive feel and palpable drama of The Downward Spiral, and others will value the lyrical complexity and rich sonic textures of The Fragile more than anything else. The unifying characteristic of their sound, though, has to be their plentiful emotional currency, and they tapped into it in unifying fashion on Not the Actual Events.

Plus, the quickfire, five-track nature of the piece felt like it suited this latest incarnation of NIN down to the ground; even within its strict temporal parameters, Reznor still found time to indulge his poppier sensibilities, on “Branches/Bones”, alongside a track like “She’s Gone Away”, which already felt deeply unsettling long before it was sandwiched between the strange resuscitation of Evil Cooper by a gang of malevolent spirits and an indescribably intense interpretation of the first atomic bomb test in the already legendary eighth part of the Twin Peaks revival.

All of those discussions can wait for later - the ones about whether or not ‘The Nine Inch Nails’ is now their accurate nom de plume, or precisely why Reznor turned up to set dressed as George Michael in the “Faith” video, or what exactly one of the world’s biggest rock bands was doing debuting new material in a dive bar in the arse end of nowhere. Here's the thing; even before one of its tracks took on a much broader cultural significance, Not the Actual Events seemed to have pithily bridged the gap between the melodic stylings of With Teeth and the rawer feel of everything that came before that.

The Reznor we’re listening to now is a long way removed from the guy who made Pretty Hate Machine, The Downward Spiral and The Fragile, and that’s not just because he is no longer a rampant abuser of mood-altering chemicals. If anything, he’s a bigger bundle of contradictions than he’s ever been. A recent interview with Vulture had him on prickly form, slamming the demystification of musicians that social media facilitates and going a bit ‘old man yells at cloud’ over Drake. In the same piece, he talks openly about the fact that his own contributions to music’s digital future are coming under the Apple umbrella, cosigned by Jimmy Iovine and Dr. Dre. He feeds the monster as he rails against it.

The resulting conflict is beginning to burst out into his creative output like an open sore. Strip away the retina-scorching visuals and the cavernous indoor arenas, and what we’ve always been left with when dissecting Nine Inch Nails shows is that irrepressible sense of urgency, one that radiated out of every second of this handheld-shot document of the group’s return to live performance in Bakersfield, California earlier this month. That’s something that’s bled right over into this latest EP, Add Violence, and when there’s only five tracks and thirty minutes to play with, that energy is transferred undiluted.

Opener “Less Than”, the release’s primary single, goes over familiar territory; lyrically, it echoes Hesitation Marks’ “Copy of A” and compositionally is a bare-bones affair by NIN standards, all burbling synths and crashing percussion. It’s the EP’s one by-the-book moment, too; everything else feels nothing if not experimental, from “Not Anymore” exploding into a veritable cacophony of a chorus at its midpoint to “The Lovers” letting its awkward, undulating electronics take centre stage, with Reznor’s whispered stream-of-consciousness the support act.

Add Violence is not an obviously human piece of work; it's electronic to the point of sensory detachment, and certainly never feels like a flesh-and-blood piece. As the knobs and dials depicted on the cover art suggest, it is the product of a psychologically fraught meeting between man and machine, and accordingly, it wouldn’t be prudent to read too much into its reflection of current political events - after all, NIN released Year Zero, a dystopian effort set in 2022, during the nadir of Bush's tenure, and in retrospect, 2007 Reznor looks like an American optimist.

Instead, we should engage simply with the vitality of present-day Nine Inch Nails and apply our own worldview to it. It is not Trent Reznor’s responsibility to instruct his listeners on how best to respond to the western world’s ugly lurch to the right, and he keeps his own emotional response buried on Add Violence, especially on the stirring but opaque twelve-minute closer, “The Background World”. These songs are vehement, but that's mainly because Reznor knows he has a point to prove every time he records under the briefly-retired NIN moniker. Whether or not they can act as a clarion call in times of political turbulence is ultimately left up to the listener - and that might, in and of itself, be the highest tribute Reznor's ever paid his followers.