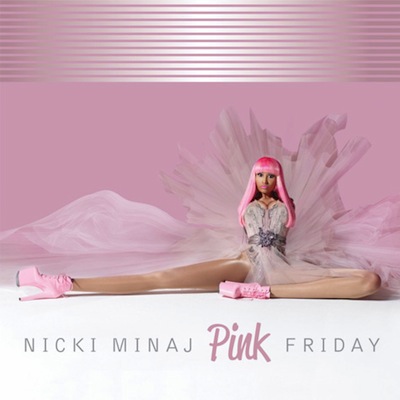 Nicki Minaj’s MTV documentary ‘My Time Now’ was nothing short of fascinating, a revealing insight into how one of this years most-talked about breakouts deals with the hyperbole surronding her much-anticipated debut. Throughout the hour, viewers were shown several aspects of her hectic life from how much involvement she obtains in the creation of the music to how she attempts to reconnect with her family. Sure it wasn’t quite the cinéma vérité of Moore but as predicted there were memorable quotations abudance. ’It’s not every moment I want to be like a freakin cartoon y’know’ as brief and insiginificant as this appeared to be whilst watching, in retrospect it’s probably the most honest quote Onika Tanya Maraj has said throughout countless interviews.

As this brief comment undoubtedly epitomises what Minaj wanted to and has achieved with her debut Pink Friday – it’s a work that both allows her manic, slighty schizophrenic and multi ego personage to flourish, but break the ever-so-lucrative U.S mainstream with a collection of r’n’b/pop songs that were ultimately created with the charts in the mind. It’s a creative decision that’s got a few critics and fans up in arms, stating label pressure and the failure of earlier single ‘Massive Attack’ for Minaj’s new candy-coated more feminine approach.

The opening trio of tracks happen to be the three most hardcore tracks here, with Eminem collab ‘Roman’s Revenge’ being a visceral and captivating hard-hitting stomp, seeing Nicki give life to a new alter ego named Roman Zolanski who she uses to cast away haters remarks in a animalistic manner. Here her lyrics are at their best – sharp, aggressive and defiant:

”And I’ll kick that hoe, punt”

”You play the back, bitch, I’m in the front”

”Nicki Minaj is who you ain’t fuckin’ with”

So it’s understandble why the record has recieved such a lukewarm reception when exciting tracks like the aforementioned are outweighed with enjoyable but incredibly safe R’n’B/pop songs. Take Rihanna collab ‘Fly’ a fairly inspirational track lyric-wise but sonically it’s your typical mid-tempo electro-pop, one that will set the charts alight but formulaically so. ‘Moment 4 Life’ and ‘Last Chance’ are just as frustratingly predictable, but thankfully ’Save Me’ shows that she can bring a sense of surprise to the fatigued genre, with not only proving she can sing fairly well but mixing desolate beats and drum’n’bass samples to a hypnotising effect.

Pink Friday is a difficult LP to cast any cemented thoughts or criticisms over not only because of it’s varied hit’n’miss song ratio but because Minaj’s intentions appear to be equally as ambigious – whose to say her choice to go pop wasn’t just a way of showing critics and fans alike that she can’t and won’t be pinned down to just one box/genre? What’s not up for debate is the fact that this will sell bucketloads, with the album set to sell well over 400,00 copies at the time of writing. It’s not the classic nor the out-there record that some may of been hoping for however it’s one that will cement her as a commercial success, and hopefully in turn allow her achieve her true potential on album two.