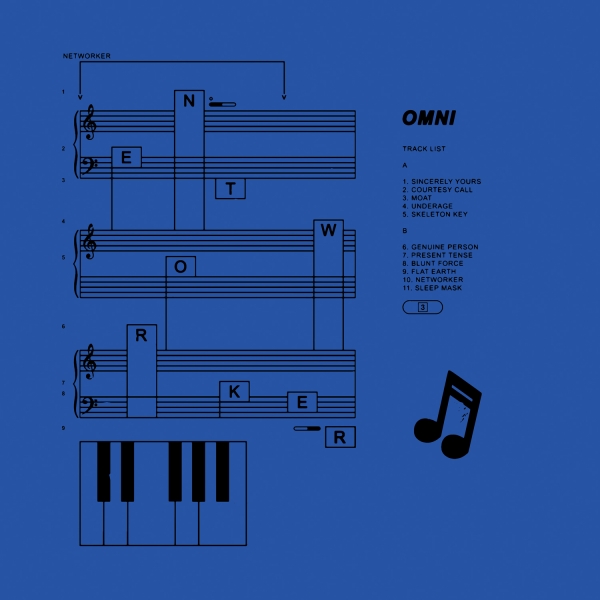 Communicated amid a wiry mesh of jagged guitars and tight drums, Omni’s bassist/vocalist Philip Frobos has, over the course of three albums, perfected the skill of telling tales of everyday mundanity through a lense of persistent anxiety.

Omni’s last album, 2017’s Multi-task, was a tour de force of angsty rhythms and Frobos’s unanimated baritone, distracted by topics ranging from heading out on dates to paying rent. Frobos may sound irreverent, and his lyrics aren’t without humour and self-awareness, but his is a commentary wrought with concerns. Not one to be left out by the times, Frobos updates his content on Networker to tackle our increasingly digitised lives, with a particular focus on the primary online bad boy, social media.

As with previous releases, Frobos continues to sound both intentionally sardonic and comically quizzical simultaneously. His amusing alarm on “Skeleton Key” (“Someone from another county, how the hell have they found me?”), which recounts his friends’ experiences of online dating, is a high point of the record. The pressure that comes with an online presence is also acutely discussed on “Present Tense”, Frobos confessing: “Guess who’s on my mind right now/Think of a clever thing to say”. While partially mocking, Omni’s observations are, as so often, pithy and on point, continuing to be a key feature of their work.

Networker is far from a concept album however, and previously trodden topics of 9-5 career concerns (“Sincerely Yours”) and emotional/social disconnections (“Moat”) still crop up. Guitarist/drummer Frankie Broyles, previously of Deerhunter, also retains the sharp, frenetic guitar doodling that has proven a staple of Omni’s music to date. The swagger to “Underage” is a joy whether it’s the first or 10th listen, whereas the closer “Sleep Mask” is almost sharp enough to prick your skin. The main diversion is the title track, a slow, synth-led piece that brings to mind the old adage you should stick to what you’re good at.

As with previous Omni albums, the main block is that you walk away without really feeling like you’ve gotten under the band’s skin. While Frobos is consistently an engaging and insightful lead, he is seemingly wary of allowing his commentary becoming more than wry observations. “Moat” is one such example where the band could have explored the nuances to refusing to let someone in emotionally, but instead decide to comment as if they were witnesses rather than intrinsically involved. Frobos himself best sums up this distance on “Flat Earth”, when he sings: “I don’t know suffering, I just move forward”.

Where the band’s great post-punk progenitors, such as Talking Heads and Television, forced their fans to really feel as well as think, Omni have yet to enhance their sound in quite the same way. Despite being an excellent release in many ways, Networker nonetheless reinforces the belief that we are only scratching the surface of what Omni have to offer.