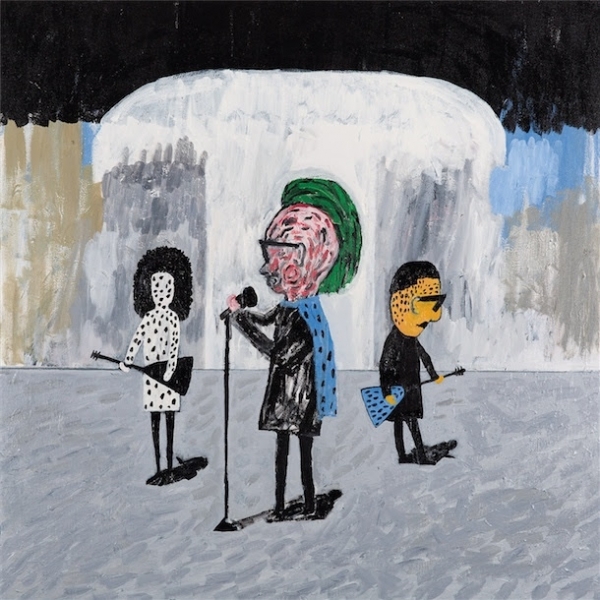 Tracking the abundance of Spencer Krug’s output over the last ten years – from Wolf Parade to Sunset Rubdown to Moonface, with Swan Lake and Frog Eyes in between – could overwhelm less-dedicated fans. For those who lost count, this collaboration with Helsinki cosmic rockers Siinai, his second, is a welcoming re-entry point to the enchanted dystopia of Krug’s creative world.

Wolf Parade recently played their first US shows in over five years with a sold-out five-night run at the Bowery Ballroom in New York, and as of this writing will soon be trekking through the UK and parts of Europe before circling back to Canada. Not only that, they have an EP of new material out. This may not seem like the most opportune moment for Krug to drop an album off his solo side, lest it get lost amid the hubbub of his much-beloved first band’s return to action. In a way, though, it does keep with the fluid, instinct-driven directive that propels Moonface. My Best Human Face, even in its mellower breathes of reflection, exhales an air of urgency.

On My Best Human Face, Krug has a habit of circling around or homing in on an image before, or even in the middle of, one of his lyrical walkabouts. “What you did in front of everyone/In the middle of the night club/In the middle of the night” repeats “The Nightclub Artiste”, the soft-rock-lit entryway into the album. First single “Risto’s Riff” kicks up a storm around the fist-pumping, eyebrow-raising chorus, “At least I’m not a photographer!”

These seven songs each play out a different kind of identity crisis scenario. “Them Call Themselves Old Punks” throws a light-hearted ‘j’accuse’ at former idealists who convince themselves they haven’t aged out of their old principles. “City Wrecker” is a sullen second-cousin of The Dismemberment Plan’s “The City”, adrift in a Montreal rendered foreign and desolate by the absence of a single person, in this case one who has “…turned into a blade of grass/And a blade of steel”. “Prairie Boy” opens on a scene from the oil boom now redefining central Canada’s economy while wreaking havoc on its environment, while musically it bears no small resemblance to the surging grooves of instrumental rock mainstays Maserati.

Krug first teamed up on record with Siinai (comprised of brothers Markus Risto Joensuu, Matti Ahopelto and Saku Kämäräinen) in 2012 for the brooding and soaring Heartbreaking Bravery. That was billed as Moonface with Siinai, while this time they are Moonface and Siinai. Though the two records are thematically and tonally distinct, it’s not clear how any underlying credit allocation reflects that. Whatever the nuances of the arrangement, it is one that both sides would be wise to return to.