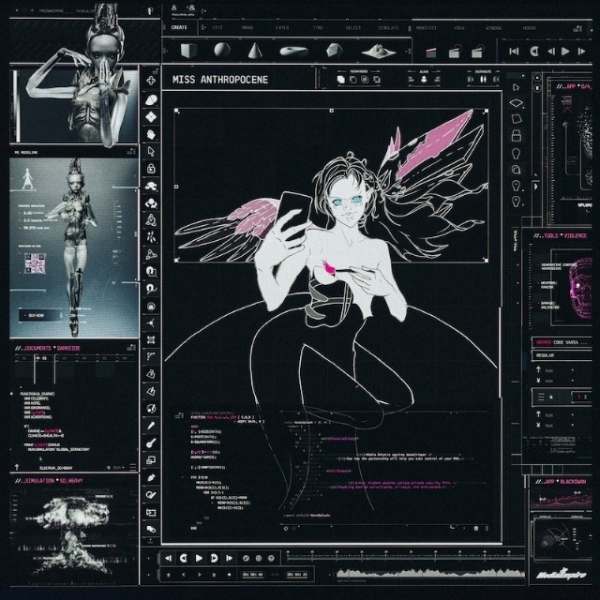 In the five-year gulf between Art Angels and Miss_Anthrop0cene, the conversation about Grimes – aka Claire Boucher – has threatened to all but eclipse her.

Such an eclipse, one which disproportionately afflicts young female artists, could be explained as a product of many things: misogyny, a rabid press, the behemoth of “celebrity culture”, or a series of genuinely bonkers antics that may or may not be rooted in the trauma of fame.

In Boucher's case it seems a little from each column: Vice and co have delighted in ribbing her about her experimental eye surgery and her plan to change her name to a lowercase, italicised 'c'. But did she do these things? Did she declare that her wellness routine involved taking a bunch of supplements and lying in a sensory deprivation tank to "astro-glide" to other dimensions? Yes. Yes she did.

Regardless of where you square the blame, the fear that this discourse would swallow Boucher's art whole is justified. And sure, in her pointed mission to reinvent herself as a cybernetically-enhanced earth mother, the aesthetic of Miss_Anthrop0cene feels a little laboured.

But, thankfully, blissfully, that’s it. The record at large is mostly untainted by all this noise – a sparkling collection of sick sad world pop, with Boucher's stun-gun talent stark and unmarred at its centre.

Miss_Anthrop0cene’s eleven tracks are cohesive, cushioned by cathedrals of reverb, speckled with chippy samples, and elevated by Boucher’s mostly poignant and sometimes dippy ponderings about the digital apocalypse. The album flirts especially with dance music's least zeitgeisty factions: “So Happy I Fell Through the Earth” has the otherworldy expanse and wave-like delays of post-dubstep, “4ÆM” sounds like a warped Hospital Records release, and “Violence”, featuring i_o, has the brazen synths of big club Ibiza. Boucher is gleefuly disinterested in referencing anything very 'now', perhaps besides "Delete Forever" - the track's distinctly 90s guitar (well, banjo) riff, and teary-eyed eulogy to friends who’ve been lost to heroin, providing a pristine highlight early on in the LP.

Only five of the 11 album tracks haven't been released – and, in honesty, they’re a bit hit and miss. "Before the Fever" feels cobbled together from the albums off-cuts, its lazy "This is the sound of the end of the world" hook just a bit too on the nose. IDORU – its break a pepped-up version of "Kill Vs Maim" – is nice but meandering. It is great to see Boucher enlist Taiwan’s Aristophanes for a banging come-back though: essentially “Scream” MKII, “Darkseid”’s rumbling bass rolls are the perfect backdrop for ‘Planes anxious rap-chatter.

So – a sigh is in order. Miss_Anthrop0cene is great. And much of what makes it great are the unavoidable, personal obsessions that Boucher has always carried with her: science fiction, nerd culture, Eastern scales, loop-pedal musicality, and an uncool love for the kind of bass you'd expect to be blasting out at Burning Man. No matter who’s responsible for the myth of Grimes – the artist herself, the vulture-like press or our simple desire for spectacle – the art in this album remains: true and immutable and sublime.