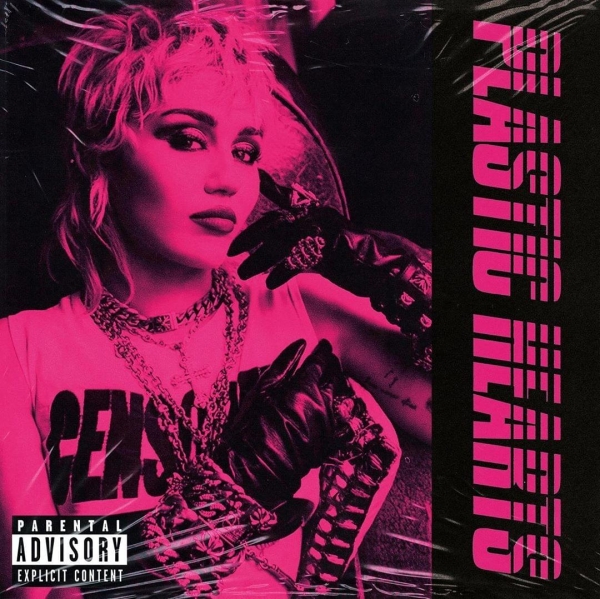 Perhaps one of the most reinvented pop stars on the planet, Miley Cyrus has decided to focus her efforts upon a rock album. However, those who’ve taken notice of the singer may feel this rebranding is not a huge surprise given her penchant for walking on the wild side - both musically and personally.

Plastic Hearts is an album that echoes Cyrus’ past. From the thick guitars of opening track “WTF Do I Know” feeling surprisingly similar to her 2007 single “Start All Over” to later album tracks “Gimme What I Want” and “Night Crawling” sounding like they could belong on 2010’s Can’t Be Tamed, Cyrus is not just a pop star. She’s a bonafide artist drawing from culture new and old to mould herself into whatever vision she sees fit.

Upon first listen, Plastic Hearts can seem unfocused. With collaborations ranging from rock icons Joan Jett and Billy Idol to pop superstar Dua Lipa, Cyrus seems to be cramming her planned rock immersion into a predominantly pop record. As the songs unveil themselves, however, it becomes clear she has managed to craft a bountiful blend of attitude driven rock with the sensibilities of pop with preternatual ease.

Raucous opener “WTF Do I Know” feels like Cyrus offloading her frustration at the media and the ongoing criticism she receives. Heard in the lyrics “probably not gonna want to play me on your station” and “I’m completely naked but I make it a fashion” Cyrus seems to be embracing a new attitude and rebelling against the public disapproval she has endured throughout her career. The album’s closing track follows a similar topic of frustration at the media, but with a more care-free and almost amusing tone. She’s honest about the pressures in her career: “I did it all to make you love me / and to feel alive.”

Plastic Hearts drops lyrics throughout which will in no doubt be seen as a reference to Cyrus’ ex-husband Liam Hemsworth, though the recent revelations of her sobriety offer a different facet. Take the mid-album track “High” which features a collaboration from Mark Ronson - a slow tempo with a classic Cyrus family country twang, she sings: “I don’t miss you / but I think of you and I don’t know why”. The penultimate track “Never Be Me” carries a similarly melancholically resolute feel: “if you’re looking for stable / that'll never be me / if you’re looking for faithful / that'll never be me”. These songs don’t feel regretful, but instead accepting and honest - far from her public heartbreak showcased in “Wrecking Ball”.

Cyrus is an artist that has never cared for mainstream music and it's four walls. Constantly being hit with criticism, many people have never been able to recognise her musical genius beyond what clothes she wears (or there lack of). However, with Plastic Hearts, comes a wonderful album about life as a fiercely independent woman. Cyrus has found the perfect balance of pushing her own musical boundaries whilst proving she’s one of the strongest and bravest names in the constant celebrity whirlwind.