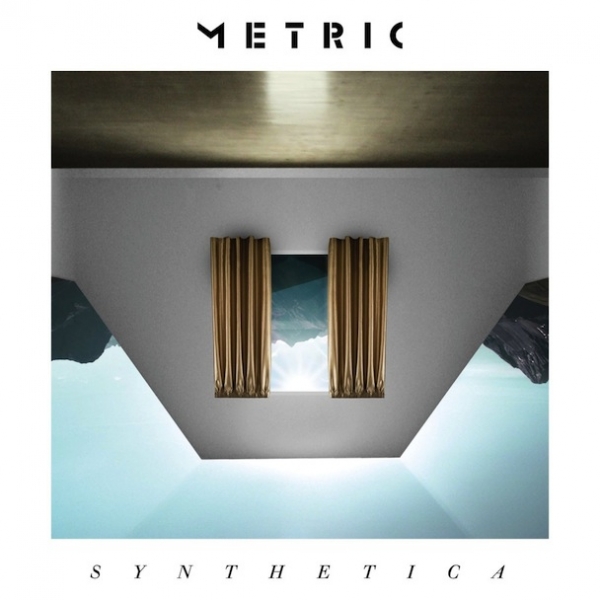 The indie music scene is going through an identity crisis. The interconnected electronic tissues of the globe allow the obscure or underground to be accessed by everyone. Indie record labels release their wares on cassette while also providing download codes to fill up our iPods. Hipsters, punks, indie queens and other groups will subscribe to an anti-establishment, DIY doctrine then whip out their mobile interfaces and share their hashtags. You can buy a portable digital recording studio with exceptional built-in mics and effects dirt cheap or convert an old laptop into a music producer’s dream even more cheaply. It is easier to be indie than ever before which, in itself, is not very indie.

Unfortunately, it is this rather awkward relationship which does not bode well for Metric and their new album Synthetica. Since their inception in the early 2000s, Metric have always blurred the lines between indie-rock and radio savy pop. Their last album, Fantasies, won two Canadian Juno Awards and snippets of it could be heard on virtually every sports highlight show across the country on any given day. Their appeal was not quite as widespread as that of mainstream albums yet the band’s polished hooks signalled red flags to the indie community.

Synthetica further pulls away from the traditional indie aesthetic and their first single, ‘Youth without Youth’, has the aura of a song destined to be played with heavy rotation on any broadcasting medium. Indie disciples have already started calling Synthetica pre-packaged or generic, which it is, to some extent. But to accept this argument outright is a gross oversimplification. When U2, arguably one of the biggest bands in the world, made Pop, they created a tongue-in-cheek experience using elements from underground dance culture and combining it with their darkest lyrics of any album to date. The title and sound of Pop had an ironic relationship with the poetry, but the dance world wouldn’t touch it because it was too mainstream and radio was afraid of it because it was too close to the underground. In a similar way, Synthetica’s identity crisis is its excellence. Metric’s Fifth album is their most complex both sonically and lyrically and it can almost be considered a theme album of sorts with the prose questioning the very polyester on which the album was weaved. In many ways, this is Metric’s first album as it fully immerses the band in a new, focused discipline. Fundamentalist indie folk might balk at the larger than life synth-guitar motifs, ultra infectious hook lines and a crisp, polished resonance. But Synthetica does not need to rest on catchy chorus lines. The lyrics, as is the precedent with Metric, add complexity to the dark pop sweetness.

“I’m just as fucked up as they say” is the opening line introducing the 43 minute affair and though the lyric was intended to describe the disenfranchisement of youth caused by their perverted digital compass points, the message really should not be lost on the rest of us. Sonically, ‘Artificial Nocturne’ is void of a lasting hook, but the track builds to a healthy climax of reverbed synth and noise guitar. It’s a perfect warm up to an expertly executed pair of tracks that blend into each as if they were one. It is actually very difficult to listen to ‘Youth Without Youth’ without also allowing ‘Speed the Collapse’ ample time to run. Both are insanely sticky but have that forbidden fruit essence Metric is known for. Interesting to note, ‘Youth Without Youth’ is a track that does not succeed on the shoulders of Emily Haines’ often sweet, seductive and poisonous vocals. The melody is really nondescript, but the pulsing, primal beat combined with an industrial synth-pop loop that will melt your ears is the real highlight.

If we listened to the gods of indie rock, perhaps their criticism is warranted on ‘Breathing Underwater’ which seems to suffer from overly-repetitive-catchy-chorus-syndrome and a rather distasteful cheery guitar progression. This one is probably destined for the radio as well, but not to worry, as new-found fans will be sadly disappointed with the morose undercurrent of the rest of the album. “Tell me one thing, I would never do/I was looking for a hooker when I found you”. ‘Lost Kitten’ is a true gem with a falsetto harmony that generates tingling sensations in places never thought possible. Metric also show impressive restraint in the way that they unveil this motif and then letting it go before it becomes overdone, rather than keeping it going like ‘Breathing Underwater’.

If you listen to the buzz, Synthetica might be described as a bit too mature for the hip crowd, and bit too synthetic for the mature crowd. If you follow your own instincts, though, you will get to enjoy an album that is sweet and sophisticated throughout.