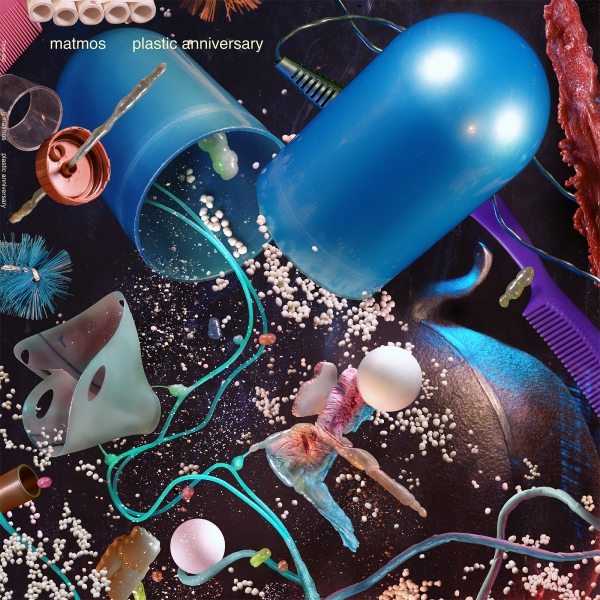 Plastic Anniversary is the newest addition to Matmos’ ever-growing canon of unconventional sample-based concept records. Following on from 2016’s critically acclaimed Ultimate Care II (an album made entirely of washing machine samples) Matmos’ latest effort sees them embracing a slightly less limited sound palette - plastic. The field recording virtuosos have built this record from samples of anything and everything plastic, ranging from exercise balls to pool balls, vinyl records to bubble wrap and bins to breast implants, and this very mixed bag of materials has produced some similarly mixed results.

Much like some of Matmos' earlier work, Plastic Anniversary focuses on making extraordinary music from mundane everyday objects, but it's not just a fascinating concept album. Plastic Anniversary is also an important political and environmental statement about our relationship with plastic and the role it plays in our lives; furthermore, it even doubles up as a 25th-anniversary celebration for the artistic and romantic partnership of members M.C. Schmidt and Drew Daniel.

This album is laced with the Baltimore IDM stalwarts' trademark glitch sound but also, more unusually, features a heavy dose of live percussion, played by a school band and Deerhoof’s Greg Saunier. Some tracks on this record, like "Thermoplastic Riot Shield", almost defy belief. When confronted with its driving industrial beats and abrasive melodic noises, it's near impossible to imagine just how Matmos created these sounds purely from subjecting a police riot shield to some physical abuse.

The most enjoyable listening is on the second half of this album, with cuts like "Collapse of the Fourth Kingdom" and "Fanfare For Polyethylene Waste Containers" boasting primal, tribal percussion, chaotic whistles and vast plastic horn sections. Other standout tracks include the almost cinematic title track and the minimal techno-tinged Interior "With Billiard Balls & Synthetic Fat".

A large portion of this album, however, doesn't make for such fascinating listening. To an extent, tracks like "The Crying Pill", "The Singing Tube" and opening number "Breaking Bread" only become interesting when you hear the story behind them - the latter, for instance, samples only the sounds of broken albums by the '70s soft rock band Bread.

While you can only marvel at the sheer imagination required to make an album like this, the end musical product leaves something to be desired. Like other Matmos albums, it relies too heavily on the concept behind the album for merit. Plastic Anniversary is an impressive experiment with intriguing results; it's not, however, an album you'll likely find yourself revisiting time and time again.