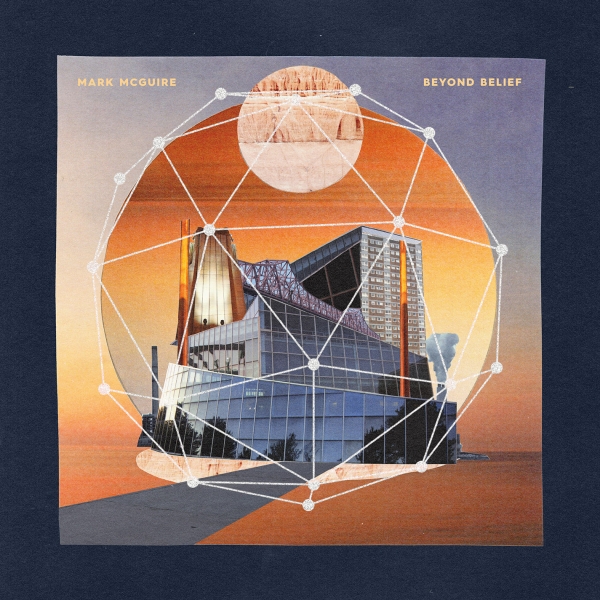 Mark McGuire’s latest album is a celestial collision between two counter-orbiting impulses: the restless ambition and accumulation of progressive rock, and the search for serenity that threads through ambient and new age music.

Those familiar with McGuire’s solo output since breaking away from the electronic trio Emeralds in 2012 might already have some idea of what to expect from Beyond Belief.  Its full length predecessor, Along the Way, which at the time McGuire described to the New York Times as being about “self-exploration and exploration of the world around you”, was an immaculate yet grounded wander across fourteen seamless tracks of crystalline guitar and piano undergirded by humming synthetic structures. Beyond Belief is somewhat less guitar-centric than Along the Way, but otherwise it is more in most every other way.

The fifteen-plus minute “The Past Presents the Future” and “Locked In Our Sky Language (For Cyan)” show McGuire testing the formal limits of his aesthetic. His prog tendencies don’t take the shape of flamboyant arrangements and distinct movements practiced by Rush and other ‘70s-era indulgers. His ambient sensibilities are too ingrained, circulation too embedded in his playing style. Because of that, Beyond Belief progresses like natural formations; mountain ranges that rise and fall over miles and miles, rivers that swell and recede as they wind toward the sea.

McGuire spent over two years assembling Beyond Belief, playing every guitar, bass, piano and synth note, and constructing every beat, in the process. As with Mike Silver of CFCF (another one of the vanguard of the new wave of new age), he is a fastidious musician whose vision requires a fair measure of autonomy. Though its elaborate nature and choice of sequencing can occasionally disorientate – the relatively short third track, “Sons of the Serpent”, feels like the climactic end of a larger piece -- Beyond Belief is not wholly idiosyncratic.

Reflections of Ash Ra Tempel and Tangerine Dream ripple along the music's liquid surface. “Earth: 2015” is a meditative drill ‘n’ bass update of Vangelis’ Blade Runner futurism. McGuire is also not without his share of peers, though, in its finer moments, Beyond Belief can sound peerless.