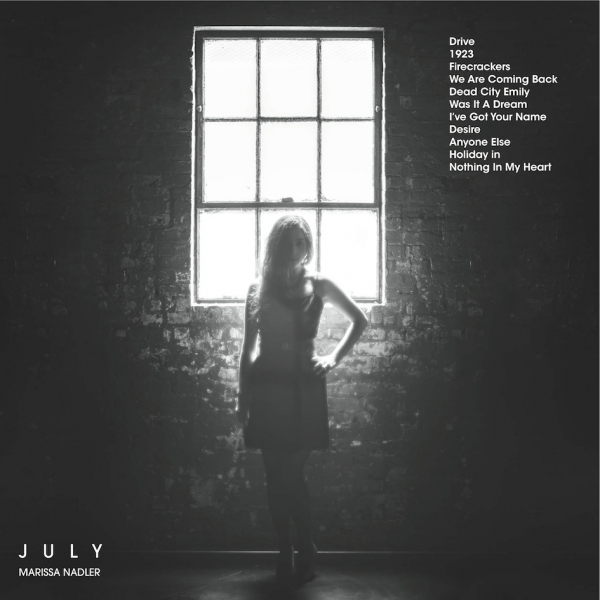 At last, catharsis has brought Marissa Nadler here. The oblique references, metaphors, couching reality in third person characters have shed away on July. Nadler ushers us by the wrist to survey her scorched Earth; splaying her demons out before us like never before, she decimates the narrative wall between her and us. In recounting the carnage and wreckage of love gone horribly awry first hand, Nadler doesn’t name names, and she still often takes care to not reveal specific events or dialog, while also sticking to metaphor on occasion, but the raw emotion she expresses cannot be ignored.

Perhaps it’s a dark joke that Nadler titled this album July, branded it with a monochrome cover, and released it in February, but at the nadir of failed love, summer feels like winter, sunlight like darkness. Nadler employs violent, aggressive imagery to magnify the gravity of her personal horrors. The tipping point of her soured relationship – 4th of July, no less –grotesquely described as when “we spilled all the blood,” as she goads her freshly ordained ex as “my attacker” in “Firecracker.” Nadler questions on “Was It A Dream” whether that relationship’s death was just that or the result of “something sinister.” On “I Got Your Name,” she “ fire” as rage finally seethes within her while driving home from her former lover. Beyond fury, Nadler impressively uses her sonic surroundings and considerable vocal prowess elsewhere to convey the magnetic passion on “Desire”s chorus, her voice full of dewy lust as she recalls, “I could fall for you, and you had eyes for me.” Simple acoustic picking and vocals free of her haunting cohorts nails the forced flippancy of a broken heart on the mend on “Holiday In.”

Enlisting doom metal producer Randall Dunn here has far from morphed her into a metal artist, but the subtle augmentations to her otherwise stark sound results in an ambience just as harrowing. The hazy and suffocating atmosphere neatly intimates the bleary world of the disconsolate. Now, Nadler is notorious for dousing her vocals in reverb but here, her multi-tracked harmonies and otherworldly backing vocals throughout are buried deep in the mix, becoming her spectral companions – behold the swarming, ghostly vocal flights closing out “Dead City Emily.” Delicate pedal-steel shrills provide fleeting, eerie glints of light amidst Nadler’s darkness – they are lone headlights on a pitch-black highway on “Drive” and the flame on a single lit match head in a dark room on “Firecracker.” Even the baroque, sepia-toned flourishes that unfold on “1923” – easily the most adorned track here – carry with them an unsettling quality.

The album’s centerpiece, “Was It A Dream,” features a frayed, raggedy honest-to-God guitar solo midway through and, as strings swell behind, Nadler declares at its peak, “It’s true that I lost a year…stumbling from room to room…hoping I’d wake up…somehow next to you.” The sickening disorientation Nadler expresses here is palpable, the burning and stinging from the friction of having your insides ripped out of you through your throat. It’s certainly not a comfortable or pleasant listen, but Nadler’s ability of transference of her collateral damage is astounding.

Following Marissa Nadler from one album to the next is like scraping away at the forearm with a scratch awl, each outing going progressively deeper, and we’re finally at blood and bone.