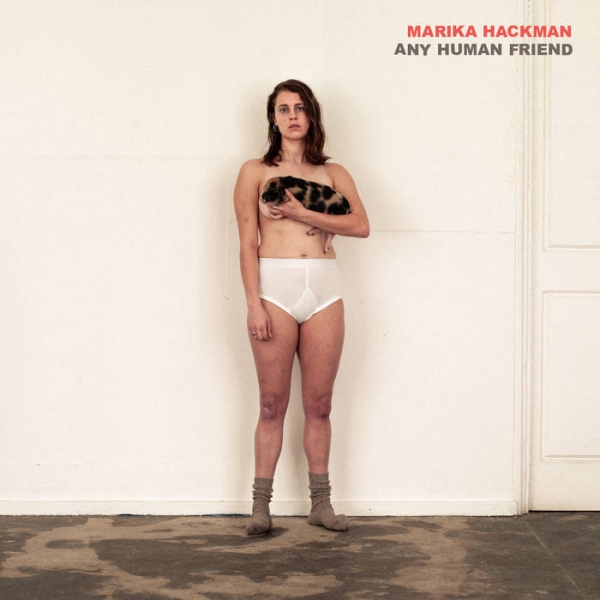 “As a photographer you enlarge or emphasize a certain moment, making it another reality. In the photograph, you can scrutinize all the details, which makes it a bit harsh: you can see things you normally would not pay so much attention to.”

Rineke Dijkstra’s work is raw and unfiltered, interested in photographing people at a time in their lives when they don't have everything under control. Inspired by these full length portraits, Marika Hackman stands against a naturally lit backdrop for her album’s cover art, cradling a piglet across her chest. Whereas Dijkstra’s photographic series are inscribed with the date and place, recording a specific moment in time, Hackman’s is titled with the album’s namesake: Any Human Friend.

Reverting the classical tropes of pop production, whether this be in melodic form or narrative structure, Hackman’s third studio album is, to put it in her own words: “me diving into myself and peeling back the skin further and further, exposing myself in quite a big way. It can be quite sexual.”

This unflinching sexuality is unafraid to challenge static industry tropes. Music has always been men’s sexual playground, one in which love and relationships between women are typically narrated through the male gaze - a fetishism of sexual pleasure. “the one” is braggadocious, exuding a boisterous masculine energy as the hubristic rock star learns they've “totally fucked their career by writing too many sad songs”, masking their pain behind a veil of arrogance and hedonistic pretence: “and all you fuckers want my dick”.

Scribing its name from a Channel 4 documentary about four-year-olds interacting with dementia patients, the project is inherently human at its core. Hackman is known for her introspective back catalogue; 2015's folk debut We Slept At Last and her swaggering sophomore project I’m Not Your Man are both softly seductive and boastfully passionate.

Describing herself as a “hopeless romantic”, “send my love” pens a letter to a lost lover as the rolling drum beats mournfully march along like a funeral procession. Using the solitary human figure as her poetic muse, she comes to the embittered realisation that those once intense feelings of love and lust have dwindled into cavernous isolation.

Writing the album over the course of a year and recording tracks in stages with producer David Wrench (Frank Ocean and The xx), Hackman wrote a number of songs in the grips of insomnia. Tracks transcend these murky blue depths, with opening number “wanderlust” dappled in shards of silvery moonlight. Cast in this ghostly glow, Hackman recorded the track on a microphone set a-top her kitchen table, her hushed tones respecting the transcendental twilight hours.

“conventional ride” is a call back to heterosexual women using gay women as a means for their own sexual fantasies: “I’ve been this girl before / some fantasy you’d love to adore”. It’s a “trope a lot of gay women experience: sleeping with someone, then it becomes apparent you’re kind of an experiment.” Its fuzzy guitars and propulsive melodies are provocative and unyielding, blurring into a chaotic haze of electronic rhythms and whirring synth patterns at the tracks close.

Any Human Friend is an explosive body of work, one that isn’t afraid to discuss sex and female eroticism with a microscopic lens. Peeling away the layers to reveal an intrinsically human record, the record closes with the album’s title track. Awash with rich sonic textures and brooding guitar rhythms, it’s emotive and insular, as if the artist had just her own thoughts for company during the project’s creative process. And yet, there’s a defiant sense of community in her writing, one which offers a platform to the overlooked, heartbroken souls.