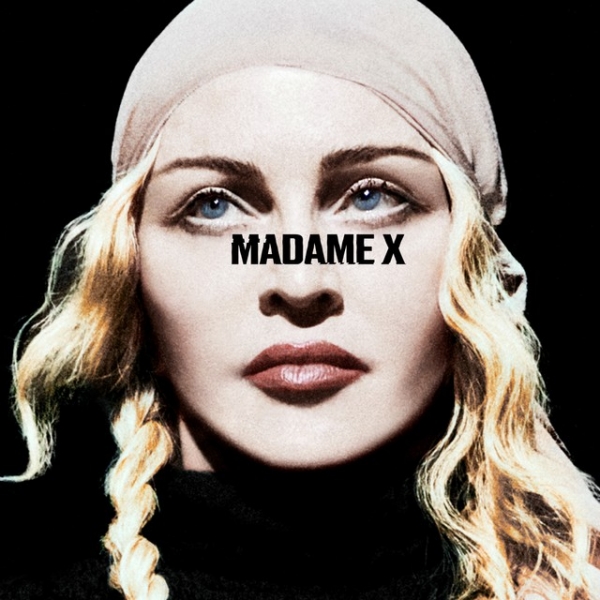 Anarchic free-spirited roots are resurrected and recalibrated on the latest instalment in Madonna’s four-decade career which has yielded innumerable conceptual incarnations and abundant controversy.

Her provocateur credentials are revitalised to an extent on Madame X, with socio-political themes embedded in its essence and current societal discord interpreted through an inimitable dystopic lens. A chameleon-like reputation for reinvention is secured and self-referenced, as she occupies various personas, such as a head of state, a freedom fighter and a spy in the house of love. This consistent transience extends beyond its premise to a multilingual scope; fluidly flitting between English, Portuguese and Spanish, delivering lyrical wit with an economy that has proved a definitive trait of her oeuvre.

A renewed impulse to harness the creative process, and its potential collaborative alchemy, can be attributed to a recent relocation to Lisbon; utilising the Mediterranean base to reawaken an organic avant-garde artistry. She indulges in a cross-cultural interplay of styles in this respect, embracing world beat eclecticism with a hitherto seldom seen scale of ambition in her back catalogue. Discernible Latin and Middle Eastern influences reverberate throughout, interspersed with the subversive yet accessible sheen which graced her gilded '80s and early-'90s output. The collective production expertise of Diplo, Mike Dean and seasoned collaborator Mirwais, is further capitalised upon to maximum potential, a combined mastery which affords an undiluted dazzle.

“Medellín” and “Bitch I’m Loca”, alongside Colombian artist Maluma, both burnish with Latin-laced lustre, a recurring motif that can be traced to True Blue’s “La Isla Bonita”. Electronica intonations interlace elsewhere on the lead single, harkening to Music-era ebullience. Comparative melancholia is deployed to vivid effect on “Dark Ballet”, brimming with a fracas of authoritarian tyranny and personal torment, straddling between the ominous and fantastical, its Joan of Arc-inspired spoken-word bridge rendered with sobering intent: “they are so naïve / they think we are not aware of their crimes / we know, but we are not ready to act”. Resonating with striking '70s-style strings, the disco-drenched “God Control” leans towards Daft Punk-esque vocoded vitality, its closing refrain of “Wake up” serving as a controlling theme; a looming portent underlying the fifteen-track album length.

Pairing with rapper Quavo for the reggae-infused “Future” proves a peppy off-beat excursion; mystique lurking beneath its surface veneer, emblematic of the encrypted subtext underscoring each word and syllable. In adopting the mantle of freedom-fighter on “Extreme Occident”, the global zeitgeist is brought to the forefront, intertwining with autobiographical introspection on occasion: “I came from the Midwest / Then I went to the Far East / I tried to discover my own identity”. Fleeting moments of such self-reflection are scattered with exacting purpose and impact on Madame X, tears in a veil that offer a confessional glimpse behind the songwriter’s enigmatic shroud. “I Don’t Search I Find”, in contrast, reverts to relatively conventional dancefloor-destined fare, slick '90s house trading on a jaunty sugar-coated bounce that will undoubtedly sate the Queen of Pop’s long-term acolytes.

Closing an album immersed in cultural relevance, “I Rise”, featuring the refrains of Parkland school shooting survivor Emma González in its prologue, represents an explicit, clarion call for reform in relation to ongoing gun violence in the United States; Madonna’s capacity for tight and searing social commentary remaining undiminished. This adaptive prowess is also witnessed in tandem with artists such as Swae Lee, indicative of a willingness to embrace contemporary talent; presenting a standard of innovative, unconstrained zeal, rather than a simple act of conformity. Madonna is not merely returning to her origins on this fourteenth album, a regenerative fervour thrives on Madame X, traversing a gamut of disparate genres, stirring curiosity and wonder with rhapsodic intensity.