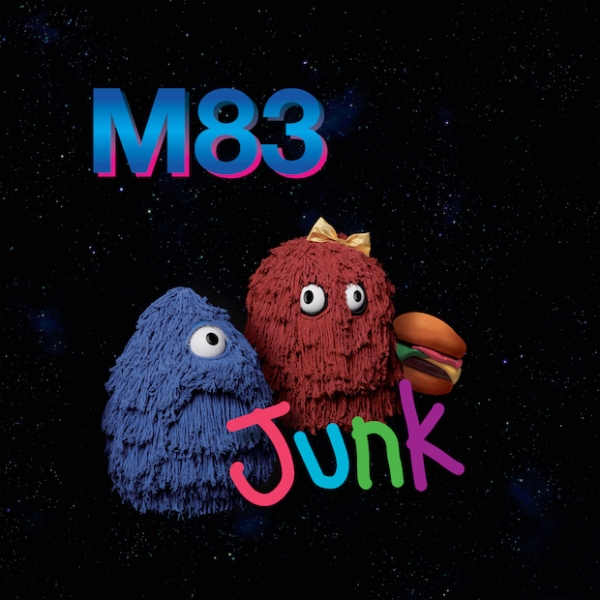 Cheese. It’s a wonderful thing, isn’t it? Whether you’re making it from the milk of a cow or from that part of your brain entirely devoted to 90s bubblegum pop and 80s TV theme tunes, it’s so wrong, it’s right.

You might think you’re too cool for the cheesiest of cheese. You’d much rather be listening to Ludovico Einaudi or Sharon Van Etten, right? But, guilty pleasure or not, there’s plenty of room in our lives for cheese. We can enjoy lyrically and rhythmically complex music while also wanting to just let loose at Flares to some Top 40 banger from 1994 (Yes, I’m referring to Salt-N-Pepa’s “Whatta Man” featuring En Vogue here).

It seems that M83’s Anthony Gonzalez has finally accepted this viewpoint too and, on the band’s seventh studio album Junk, leads us on a merry dance down the candy-coloured recesses of his mind. After Hurry Up, We’re Dreaming brought M83 some much deserved mainstream fame, thanks in no small part to the excellent “Midnight City” opening every episode of Made In Chelsea, it makes sense that Gonzalez would create something with more pop appeal.

From album opener “Do It, Try It”, you realise this couldn’t be further away from the intricate post-rock tapestries of sound present on the likes of Dead Cities, Red Seas & Lost Ghosts if it tried. It seems as though those buzzing guitars and whispered vocals are all out the window, replaced by jaunty piano house and fist-pumping, festival pleasing choruses. It’s massive, boogie-inducing weirdness akin to Todd Terje’s space disco - bouncing along, making a beeline for those who threw “Midnight City” on every summer playlist they’ve made since 2011.

This is a record inspired by the kitschy TV theme tunes of Punky Brewster and Who’s The Boss , so cheese is put squarely in the forefront. It’s kitsch none more obvious than on the ridiculous “Moon Crystal”, which, it's entirely possible, could actually simple be a cover of a theme tune to a TV show you've never even heard of. At a time when those shows you’d long forgotten about are making a comeback (notedly the dreadful return of Full House), M83 seem to be riding this wave of nostalgia for all its worth. Even when the sumptuous “Atlantique Sud” comes along, with it’s beautiful French vocals full of longing, there’s still a hint of "Where Everybody Knows Your Name" from Cheers in that piano.

Junk’s problem, however, is that, as it winds through these odd, vivid streets of Gonzalez’s mind, you begin to question which which version of M83 you’d rather they be (that and the fact it utterly wastes a Beck appearance on the forgettable “Time Winds”, which is just unforgivable really).

When the stunning “Solitude” arrives to remind you just what made M83 so special in the first place, you begin to pine for that cinematic beauty. Strings ache and distorted vocals strain with emotion - it’s one of those downtempo orchestral stunners that could probably work as a Bond theme, albeit a Roger Moore-era one thanks to that keytar solo. Turns out Gonzalez actually does have it in him to combine that FM pop of Hurry Up, We’re Dreaming with the vivid shoegaze of Before The Dawn Heals Us quite well, so why isn't he doing that more often?

With the dream pop sheen of the wonderful “Laser Gun” and the bubbly sax strut of “Road Blaster” swiftly following, both feeling tied to the M83 of old, you begin to reevaluate how fun those kitschy tracks actually were and why they weren’t more like these latter tracks. By the time “Summer Night 1987” brings the album to a closer with beautiful stillness giving way to wonderful Stevie Wonder-esque harmonica jams, your mind is firmly set on which M83 you want, making the rest of Junk seem like a bit of a waste.

Junk’s issue is most likely down to its length. Much like Hurry Up, We’re Dreaming, itself a double album that probably didn’t need to be, there’s a lot of filler here, which only serves to exacerbate this contrast. Of course, when they decide to go full cheese, there’s a lot of fun to be had, particularly with “Do It, Try It” which you know is just going to rule the festival scene this year. But then there’s also the likes of “Moon Crystal” and “Time Winds” there which, like bad 80s sitcoms, you wish would disappear and never land a Netflix reboot.

Once Gonzalez has had his fun and begins to settle in to the ways of the old M83, but with a bit of a pop sheen to it, is when Junk works best. It’s just a shame you have to flick through the channels to find the gold.