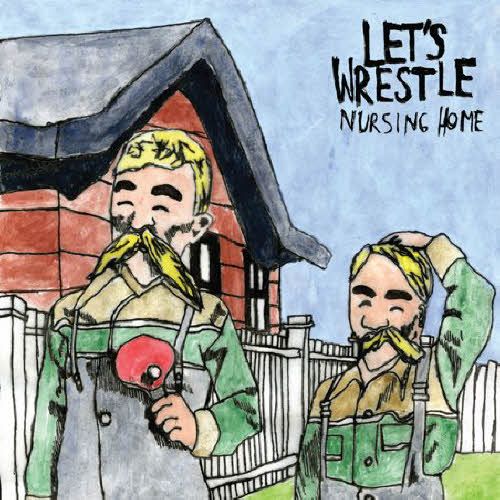 The spectre of Steve Albini hangs heavy over Let’s Wrestle’s second album Nursing Home. It was recorded by the great man in his studio in Chicago last year and his trademark sound percolates through each of the twelve tracks. Rather than this being a negative trait however, it sounds like a match made in heaven. Let’s Wrestle approach their songwriting in a raw and stripped back manner and that’s now matched by a sound that perfectly compliments it. You can’t help but think that Albini has coaxed and coerced the band into replicating this approach in all aspects of their life. This is in marked contrast to the rather sprawling, and sometimes messy, approach on their debut. Nursing Home is a tight and focused album, and all the better for it.

It’s their humour and rough and ready approach to life that shines through all the songs, occasionally punctured by some rather more open and heartfelt moments. With Albini behind the controls, Lets Wrestle have honed their sound and also confirmed their influences; The Wedding Present, Weezer and Buzzcocks all filter through. It’s that pop-punk sound brimming with three chord riffs, driving drums and spiralling bass lines that dominate. Best of all, no song passes the three minute mark – the album never runs out of steam and never outstays its welcome. You’re bombarded by catchy choruses, witty one-liners and laugh out loud encounters. It’s pure, unabashed, enjoyment.

‘Bad Mammaries’ is the song you wish Weezer would write rather than their recent faux-ironic nonsense. Scuzzy guitars tumble over the thrashing beats as the refrain of “You’re passed your sell-by date, and stop flaunting your mammaries” beat out (or should that be off?), a complaint about the rough and ready ladies who adorn the red top tabloids perhaps? The fun steps up with ‘There’s A Rockstar in my Room’ which shows that the Wrestle boys haven’t lost their innocence or naivety with their increased profile. Riffs cut obtuse angles as their wishes rupture the playfully electric rhythm. The slacker anthem of ‘I’m So Lazy’ adds Pavement into the mix: “I’m so lazy I can’t sleep”, the 21st century complaint of our over-saturated bodies. Oddly, this is followed a few songs later by ‘I Am Useful’ which sings the joys of finding out you can make a difference – the antithesis of lazy, but the hardest thing to actually pin down. Providing further evidence it’s not all about sex and fooling around, ‘For My Mother’ could be the long lost cousin of a Wave Pictures song. A simple lament that’s heartfelt and emotionally raw: “but now she’s gone, my mother’s sad but I’ll take care of her”, only those with a heart of stone could not swoon.

Let’s Wrestle have cultivated a wide scope in their songs. The music might be simple, raw and rough round the edges (nothing new with Albini watching over), but the band are still flexing the muscles and cracking their knuckles in terms of songwriting. They’re no one-trick pony. The rawness, honesty and humorous nature of the songs shine through. Their songs switch between topics seamlessly, a skill that’s incredibly difficult to pull off. Let’s Wrestle have managed that on their second attempt. Impressive.