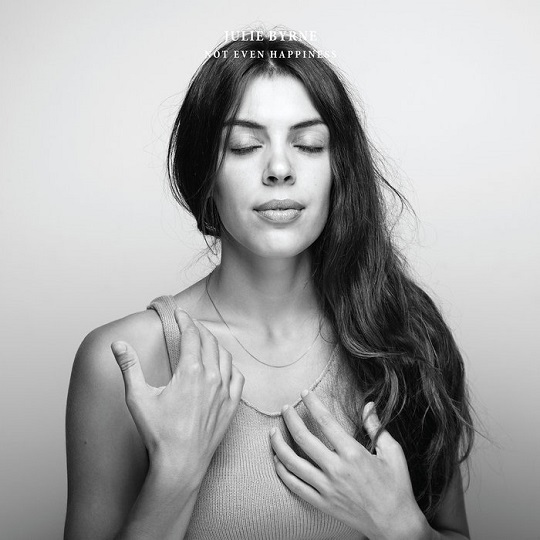 A new year brings with it a mixed bag of feelings that includes transition, uncertainty, expectation and hope. Such emotions are lovingly and opportunely captured on Julie Byrne’s second album, Not Even Happiness.

In his eulogy to Carrie Fisher, Rufus Wainwright mirrored a similar state of mind, “These musings, romantic and sentimental, must also soon abruptly come to a screeching halt. The dream is over and we are now officially firmly headed for the future.” A similar perspective informs the narrative of Not Even Happiness, with the key difference being that whilst there are several references to endings, the record is also full of hopes and dreams.

Byrne has described the gap since her debut, 2014's Rooms With Walls And Windows, as necessitated by the need to experience things in order to write about them. Accordingly there are references to travel throughout, “I Live Now As A Singer” has the line “And I take my life across the country” on “Sleepwalker”, accompanied by a beautifully picked guitar, she sings “I grew so accustomed to that kind of solitude… I crossed the country”.

Nature and matters of the heart are also leitmotifs. On the opening “Follow My Voice”, where the hushed guitar playing and intimate singing sets up the envelopment of the songs’ atmospheres, Byrne intones “I've seen a double rainbow / I got a complicated soul… I’ve been called a heartbreaker, for doing justice to my own.” “Sea As It Glides”, which contains the brilliantly ambiguous line “We’ve been lying on shore for a while…” closes to the sound of waves rolling gently across a beach.

The record is segued with the short instrumental “Interlude”, as if Byrne needs to draw her breath before continuing her story. The business of song-craft is resumed on the lovely “Morning Dove”. a musical cousin to “Emeralds” from Rooms With Walls And Windows, where the words muse on walking in the woods to a backdrop of musical sparseness.

“All The Land Glimmered” returns to nature and is so camp-fire in its mood - close your eyes and you can picture a fire crackling in a forest - as its words muse on the difficulties of love. “Lover, I know it must not be easy… There was a time I called you in the night, when darkness lived in me.”

On the closing “I Live Now As A Singer” Byrne makes the records' transitional theme crystal clear - she completely changes the musical approach. Her guitar is nowhere to be seen; instead the instrumentation is provided by atmospheric keyboards and strings. It’s a suitably rapt and devotional way to close a record which documents the ups and downs of a spiritual and literal journey and rather than wallowing, it’s the sound of acceptance and hope.

Whilst Byrne’s musical touchpoints remain in the world of folk and country, bringing the likes of Tim Hardin, Nick Drake and Joni Mitchell to mind, with Not Even Happiness she’s spreading her wings musically. There’s more polish to the production, yet the joy that is her storytelling, heartfelt singing and inventive guitar playing are the songs heartbeat. The time and patience she’s put into road-testing the songs - she played a stunning version of “Natural Blue” at End of the Road in session in 2015 - has paid off in spades.

Byrne has written a lovely bridge from the annus horribilis that was 2016 that heralds a new start for a New Year. Listening to Not Even Happiness is like being wrapped up in blanket as a child; it gives you comfort and more than a little reassurance, whatever the future may have in store.