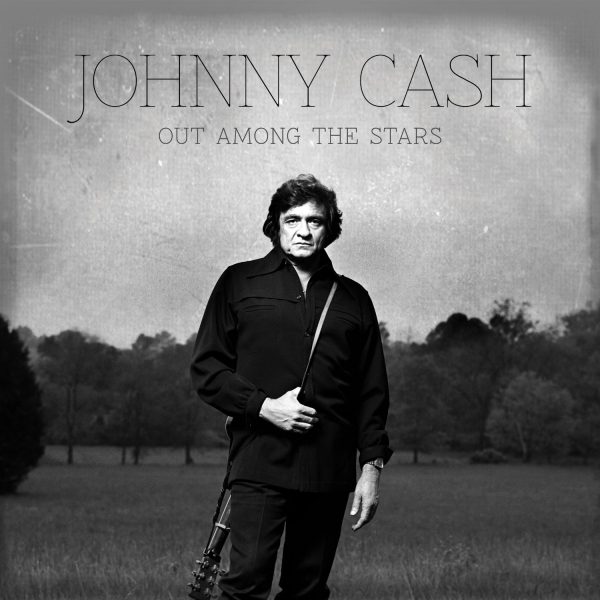 It’s natural to be wary of posthumous releases. At a certain point, one has to wonder if we’re being given record label chaff, material the artist had already decided wasn’t wheat. There’s a certain calculus involving our need for more from departed musicians and writers, the artists’ own (presumed) ideas about their work, and the dictates of profit that often motivate vault-scraping releases from deceased creators. When does the whole exercise become unfair? When does it willfully supersede the careful curating and selection by which musicians gave us what we already had, and withheld what we didn’t know we were missing?

Out Among The Stars, the third posthumous release of material from the late rebel-country legend Johnny Cash, begs these questions. The twist comes in recognizing that the material on offer here was in fact gleaned from a 1981 album shelved by Columbia Records, and now re-released by Legacy Recordings (ironically enough, a Columbia subsidiary, recalling the famous story of fellow outsider-country artists Wilco, and their twice-purchased Yankee Hotel Foxtrot). Where so many other archival albums feel like exploitation, Out Among The Stars comes across as very late, very poetic justice.

The music itself is largely reflective of the no-man’s land Johnny Cash found himself in between the high-water marks of the 1960s, and the brooding Southern gothicism of his 90s American albums. As such, Out Among The Stars is brighter and more pop-centric than the barbed creakiness that defines most people’s idea of Cash. The album-opening title track moseys along in a middle-tempo countrypolitan shuffle, gospel harmonies and slide guitar haloing Cash’s baritone story song of struggling middle Americans; more specifically a troubled young man caught in a gas-station robbery gone wrong. The song uncomfortably pairs a populist understanding of the bitter ironies of crime and punishment with a sugar-sweet studio sound, forcing a round peg into a square hole. The sheen of industry is conspicuously at odds with the song’s leftism. There’s a reason why Cash’s best documents were proto-punk takes on skeletal country, recorded in a prison. There was a sere angularity to the sound that matched the desperation of Cash’s narratives. Here there’s an odd disconnect between poetry of desperation and sounds of substance-free comfort food.

Elsewhere, the semi-spoken ramblin’ of “If I Told You Who It Was” holds promise that is largely burdened by harshly over-treated, terribly dated electric guitars that ultimately sound like aural cake frosting, and a harmonica oddly reminiscent of The Country Bear Jamboree at Disney World. It is in these moments that one is most reminded that these are songs recorded in hopes of jumpstarting Cash’s then-sagging career, lending a second layer of sadness to songs from a dearly missed genius. “Call Your Mother” is Cash boiler-plate in its spartan, steady-ticking arrangement, but that doesn’t quite help such a maudlin statement, especially coming from an artist normally so invested in proletarian desperation, rather than middle-class cliché. “After All” offers an odd look for the Man In Black, a waltz-timed torch song built around glittering electric piano. Like so much of the album, it feels like an uncomfortable medium for Cash, though clever lines like “After all this time, you’re still a friend of mine / So I believe in someone after all,” making double-meaning palindrome out of the title, at least showcase just how sharp the expertise of Nashville song-writers could be.

Better is the jangling “Baby Ride Easy,” a rustling duet with June Carter Cash that plays like a bright-side sequel to “Jackson,” benefitting from a spry arrangement and a foot-loose tempo. The piss-taking make-believe squabbles of “Jackson” are replaced by warmly absurd promises of dedication (June, for instance, promises to “fix up the White House” should Johnny ever be elected President). Indeed, hearing their voices intertwined one last time feels revelatory and utterly welcome, especially given painful memories of the time Cash spent on Earth after his soul mate had departed.

Elsewhere the record anticipates the noir-ish twang to come on the Rick Rubin-assisted American Recordings, adding bite to a record largely defined by pop-country brightness. “She Used To Love Me A Lot” unfolds its titular blues over a dark prairie of eerily plinking string-band minor key. When the album’s ever-present gospel harmonies arrive for the chorus, they feel like other-worldly voices rather than artificial sweetener. The spare rustle of “I Drove Her Out Of My Mind” is similarly welcome in its relative proximity to what made Cash singular. The song is a macabre, tongue-in-cheek ballad of love and desperation – albeit one whose violence is, at the very least, discomfiting (“I’ll take her on a scenic cruise, right off of Lookout Mountain / ‘Cause she said I never took her out when she was mine”) set to the cruise control picking that defined Johnny Cash in our collective ears. There’s even an interesting return to Cash’s arraying of “haves” and “have-nots” as he wryly thinks of the Cadillac dealer who just sold him his soon to be “smashed” auto.

The bucolic charm of “Tennessee” is the absolute high-point here, and reason enough to think about picking up Out Among The Stars. Ostensibly a love-ballad dedicated to the good-life in the titular state, “Tennessee” finds a way to make a softened Johnny Cash, almost uniformly focused on fun and humor, feel like a welcome front-porch yarn spinner rather than a man searching for any way to stay in an industry that had left him behind. Complete with a “cabin in the country” and “a dog that won’t even bark at a firefly,” “Tennessee” is the album’s most richly-detailed piece, a story-song dedicated to populating precisely the world in which we imagine Cash. The album is at its best whenever it enters this mode, painting a Southern fantasia of charm and weariness, even if the song’s domesticated comfort might have been a target for a more feral, iconoclastic Cash just fifteen years earlier. Over three decades after these songs were recorded, it’s fascinating to hear this interlude of good humor between the populist heat of At Folsom Prison and the Christ-haunted nightscapes of the American albums. At times the record’s pleasantness feels forced, part of a calculated game plan. But at its best, Out Among The Stars is a gentle reminder of how sweet the everyman missives of the Man In Black could be.