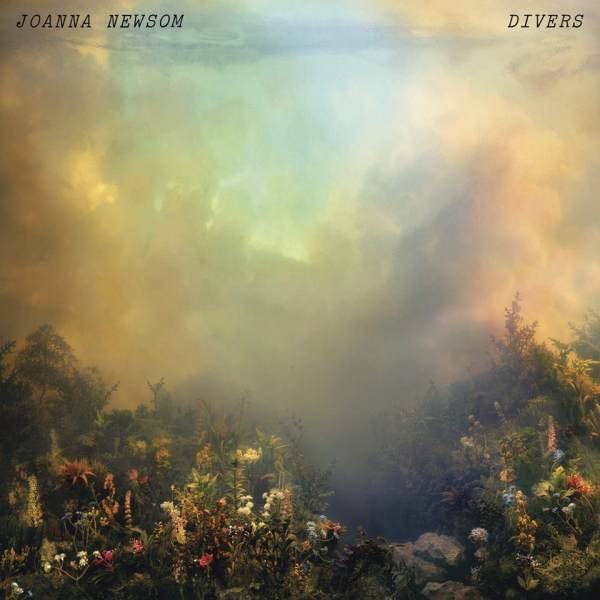 With her latest masterpiece, Joanna Newsom mostly jettisons the sprawling and the slow-building in favour of punchier, more immediate compositions.

​This, inadvertently, also coincides with her fourth long-player being the poppiest of her records, to date. Well, you know - ‘pop’ in a Joanna Newsom kind of way.

Ask any music lover – perhaps not those who, when talking about their listening tastes, state: “Oh, I like everything” – and they’d admit to having at least one artist with whom they’ve got that special
relationship, whereby the release of new music by that artist makes them that much more excited about life. The Californian virtuoso certainly achieves this feat with me and, so, I must preface this review with a full and frank disclosure of a vested interest. Despite best attempts to put Divers under an objective magnifying glass, I accept that an inherent bias in its favour may occasionally creep in.

Truth be told, on a good day I can take or leave Newsom’s debut, The Milk-Eyed Mender. It features some of her better-known cuts and is possibly easier to digest at first sitting than its successors, Ys and Have One On Me, but the latter two each prove to be a more rewarding listen, as their idiosyncratic structures and lengths (Ys has only five tracks whilst Have One On Me boasts 18) enhance rather than impinge on their palatability.

The push and the pull of the past five-and-a-half years - being the interval between Have One On Me and what Newsom has described as her “new idea” - underlie additions to and expansions of her musical toolkit. The sound takes on fresh layers, with the marxophone and electric organ (Newsom uses the Mellotron M400) - amongst others - playing important supporting roles at various points on the record.

And, with a formidable knack for telling an engaging story in the space of a song, Divers is further proof that, as a lyricist, Newsom is second to none. She is often accused of using “big words”, the implication being that she is merely showing off her dictionary-like vocabulary. In reality, however, it all comes down to her love of language and its ability to evoke mental landscapes.

The album opens with "Anecdotes". A mourning dove’s perch-coo heralds a six-and-a-half minute duet between piano and harp, set against an intricate orchestral arrangement. These soundtrack Newsom’s crisp vocal on a classical, meandering tune that reaches its zenith just before the halfway point, where a signature musical hook effervesces with the harp’s playfulness. As the song approaches its epilogue, she sings: “You will not mark my leaving / you will not hear my parting song / nor is there cause for grieving / nor is there cause for carrying on”. The piano and diminishing strings are the sole allies to Newsom’s voice here before, eventually, being rejoined by the harp and the orchestra for the song’s instrumental finish.

The album’s first single, "Sapokanikan", arrives next and poetically laments our growing, passive separation from our history, ancestral origins and surroundings. Newsom takes New York’s Greenwich Village as her inspiration, projecting to a century down the line, when a hunter standing in what used to be Manhattan - long after the city is gone - would look and despair at how our generation had failed to preserve its heritage and “see with wonder / the tributes we have left to rust in the parks”. The track starts jolly enough but soon after Newsom introduces this hypothetical hunter, the mood shifts and deepens so that, by the time her refrain of “look and despair” has throttled you with sadness, you feel as bereft as she looks when she delivers the line in the song’s accompanying video. “Look and Despair” was, apparently, also the working title of the song, which Newsom debuted live at the Treasure Island Music Festival three years ago.

In fact, four other songs from Divers have, similarly, done the rounds as live recordings in the past few years, including the album’s second release, "Leaving The City", which got its first airing back in the summer of 2013. At the time it was performed on the harp alone but its recorded alter-ego has accrued much by way of additional instrumentation, not least the drums (played by the artist’s brother, Peter). In a recent interview Newsom admitted that New York was not for her and, if you’ve come across the over-abundance of recent think-pieces by people rejecting their metropolitan lives in favour of anywhere-but-London, this song’s sentiment may well be familiar. With an arrangement that shrugs off predictability, Newsom charges through almost frenetically: “We seek our name, we seek out fame / in our credentials, paved in glass / trying to master incidentals”. Sonically, you may not think it from its opening bars, but "Leaving The City" is the track most set apart from Newsom’s back-catalogue. Having said that, on a record which draws heavy inspiration from New York on the one hand and love on the other, "Leaving The City" sits amidst its cohort comfortably.

"Goose Eggs" is where Divers dips a bit. Production-wise, the closest it teeters towards is somewhere between "Good Intentions Paving Company" and "Soft As Chalk" from Have One On Me, although it never gets near enough to matching their charms. Things pick up again, however, with "Waltz Of The 101st Lightborne", as an imaginary battlefield hosting a duel between the living and their ghosts is set to a dance in triple time. It would not be out of place on A Prairie Home Companion and its final 45 seconds or so provide cinematic post-bellum elation.

With "The Things I Say" and "Same Old Man", both among the Divers songs Newsom debuted live years back, you could almost mistake her voice for Karen Dalton’s. Which makes sense, for it was through Dalton’s rendition of the latter – a traditional number arranged by Steve Weber for his band, The Holy Modal Rounders – that Newsom admits to discovering the song. She and Aden guitarist, Kevin Barker, performed it as the encore to her Ys show in Brooklyn almost eight years ago and it has clearly stayed with her as a favourite, since. Again, the spotlight is on New York (“New York City won't see me again”; “New York City continues all alone”) and the Dalton-esque delivery is accompanied by the harp and banjo, complementing each other seamlessly.

On "The Things I Say" it is the piano against which Newsom’s voice rests, as the song’s protagonist administers a critical self-flagellation: “If I had the space of half a day / I'm ashamed of half the things I say / I'm ashamed to have turned out this way”. For a small, introverted song, it effortlessly emerges as a highlight.

Sandwiched between "The Things I say" and "Same Old Man" comes the album’s eponymous track, previously known (in its bootlegged live incarnation from 2012) as "The Diver’s Wife", a title which foretells the role donned by Newsom for its plot. Lyrically, it demonstrates what the singer-songwriter does best, which is to unfold the relationship at the core of the song pithily and effectively, grabbing and touching the listener with words that simultaneously thrill and sadden: “Tell me why is the pain of birth / lighter borne than the pain of death? / I ain’t saying that I loved you first / but I loved you best”. Alongside, the arrangement renders each tug of the harp-strings a tug at the heart-strings.

Newsom continues with her endeavours to punch you in the gut on "You Will Not Take My Heart Alive" - and she succeeds. With each repetition of this blunt, glaring refrain - of which there are plenty -  an imaginary, subdued doll spins to the tune of plucky music box twinkles. After my first listen to the album, this was the song that stayed with me the most.

On "A Pin-Light Bent", she starkly pours out: “my life comes and goes”. Her character could be a bird or a bee, in flight motion above a garden. Here and there her voice flares up into beautifully piercing movements, lifted by the harp’s tremors. It all segues nicely onto album closer, "Time, As A Symptom", via the cooing of the mourning dove first encountered on "Anecdotes". Whilst it bears little similarity to it, Newsom’s use of the dove’s cry here is reminiscent of Paula Cole’s "Mississippi", in that this sound is entrenched as a part-and-parcel motif, an integral element in the song’s would-be chorus. At the four minute mark, it all erupts in a drums-and-orchestra crescendo and Newsom’s multi-layered harmonies are a delight.

And just like that, 52 minutes will have flown by and you, inevitably, find yourself going straight back to the beginning, to that mourning dove’s preface, willing yourself to make the time to sit through the whole thing again. And again.