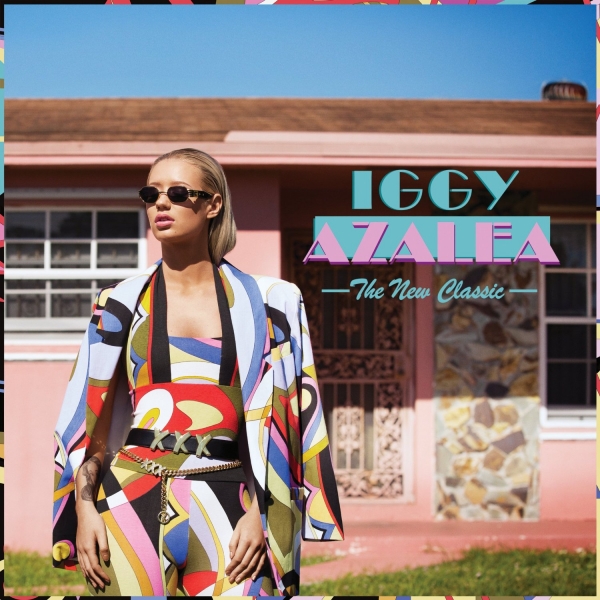 The New Classic is an ambitious pop-rap record, steering Iggy Azalea out of her comfort zone – you can glimpse her actually singing for example, and she dabbles in acoustic soul (“100”) as well as electro-reggae/dancehall-lite (“Lady Patra”) alongside her standard trappy chart-bait.

It’s not a groundbreaking record sonically – though it is fantastic, it’s her story and her words that are the draw. It’s a pretty famous story, summed up in “Work”, but essentially, she moved from her native Oz to Miami age 16, all alone, to pursue a career in rap. Initially, as she scaled the ziggurat via Southern hip-hop with an Atlantan drawl that usurped her own Aussie accent, we saw Azalea dip into gangsta rap and garner controversy (mainly for early YouTube hit “Pu$$y”), but now as that chapter of her life ends, she emerges stronger, truer and more vocally talented than 90% of the top rappers in mainstream hip-hop.

Almost eight years on from being fresh off the boat, she’s flourished, becoming the kind of superstar that’ll give you whiplash when she enters the room. The New Classic chronicles the hardships of that journey. On first glance, dressed to the nines on red carpets, she might appear a silver spoonfed doll, but she’s as real and down-to-earth as they come (“Don’t Need Y’all” is pretty representative of that). This debut album proper, eagerly anticipated across the globe, is Azalea celebrating the end of a near-decade of ordeals. It’s Azalea’s retrospective, not just cheering recent successes, but documenting everything she’s had to overcome in the process, for posterity and to stimulate her legions of fans.

“Goddess” is emblematic of the LP’s core tenet. It sounds like a track Kanye West would have as a set staple. In terms of Azalea’s repertoire, it’s a career highlight: the production is flawless fusillade, an apocalpyso hip-pop Armageddon. It’s a galvanising rapture, Beyoncé-esque in terms of motivation and female – heck, human – empowerment, and her snarled, coiled-larynx spiel in the chorus fuses razorwire, boomslang venom and the piston-firing impetus of a Rocky speech. Oh, and did we mention it’s got a kickass, totally out-of-place-and-therefore-awesome hair metal axe solo at the end? No? Well it does.

Although the magnifying glass Azalea employs mainly scrutinises her trials and tribulations, she’s not one for ignoring the overwhelming urge to lunge for pop. The focus is clearly on the innate themes and words bursting from her lips like doves from a Vegas magician’s sleeve, but tracks like “Change Your Life” (featuring mentor T.I.), “Black Widow” (featuring Rita Ora) and “Fancy” (featuring pop catalyst Charli XCX) are slabs of indulgent, Top 40-ravaging behemoths. Anthem is a word bandied around more than coke in an ’80s Wall Street film, but for “Fancy” at least, it’s apt. It’s uplifting, self-affirming and packed with the rousing singalong strains that are integral to a genuine pop classic these days. It’s a new classic (badum-tish).

Iggy Azalea might seem like an act easy to deride or yell “sell-out!” to, due to her transformation from the Sleigh Bells-sampling early mixtapes to the EDM-twanged furore of major label success, but her rags-to-riches saga is inspirational. Listening to The New Classic, you can tell that she’s not changed one bit. She’s got a bigger platform, she’s infinitely grateful for the chances given to her – there’s no rap entitlement on display, and even brand-dropping doesn’t feel disingenuous or superficial, somehow – and, furthermore, she’s a grounded everyman rap icon. It’s endearing to no end. Azalea’s an affable bundle of chum-ly charm with lessons (not patronising lectures) that are applicable for anyone with a lick of ambition – “Impossible Is Nothing” is probably the best example. If you’ve got your sights set on stardom, on making a name for yourself, Azalea’s the role model you should adore. Let her gospel be an allegory for your rise.