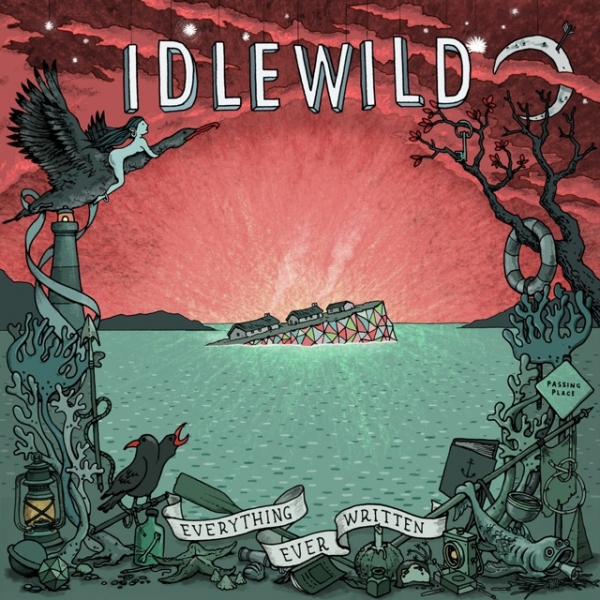 Legendary Scottish indie-rock outfit Idlewild were long gone up until a few months ago, but their epitaphs were never carved in stone; they always knew they’d come back, even if the cult-like fanbase had started to lose faith in a return. After a brief stint touring Highland venues and remote Scottish islands, Idlewild set upon a familiar route – they were ready to release a new record.

Everything Ever Written is the first studio LP from the band since 2009’s Post Electric Blues, which was somewhat of a return to form after a brace of lukewarmly-received efforts. However, it took them over half a decade to find the time to whittle the follow-up. Recorded/released through the help of PledgeMusic, they’ve done it, for once, on their own terms.

That process has elicited a number of changes in their sound.

They’ve lost some of that acerbic, vinegary sting that came with tunes like “A Modern Way Of Letting Go”, “Roseability” or “When I Argue I See Shapes”. However, in losing that once-serrated edge, they’ve gained a zoomed-out perspective and a maturity; the time away has done wonders for their collective psyches, and they return, not likes bulls in china shops, but rather with a considered, careful approach. There’s a real sense of purpose in Everything Ever Written. This move had been hinted for a while, with the evolution to their current form evident in tracks like “American English” or “El Capitan”.

It’s a reflective anthology, with the band – or more aptly, lead vocalist Roddy Woomble – sculpting paeans to growing up. Everything Ever Written is keen to analyse the traumas of getting older, and rather than look on halcyon days with a regret, or a bitter grief, yearning for days gone by, they gaze back with contentment and an excitement for the future. Prescient, in a way; it’s not just Scottish fiction here (wahey!), that much should be obvious.

They’ve put a stronger emphasis on folk and Americana in their new material – “So Many Things To Decide” wields dusty fiddles, a creaky organ and softly strummed six-stringers – veering away from their more aggressive guitar-focused timbres of yore. “All Things Different” feels like a jazz-country jam; “Like A Clown” feels like something you’d hear on a trek down Route 66. It doesn’t feel like they’ve stumbled upon this change by accident. There’s a real confidence in the path they’re going down – probably due to the experience Woomble’s had while Idlewild have been away.

There are issues on Everything Ever Written, however. One of the most prominent facets of Idlewild was their knack for great guitar hooks. Some of this remains – “Come On Ghost” and “Collect Yourself” have swaggering, festival-poised licks that squirm and writhe with the best of their back catalogue – but parts of the album lack this same immediacy or punch. For a band built on the neck-snap energy of their noise, it can feel a little lacklustre, especially to the longtime devotee.

This newfound ‘growing up’ that we see on Everything Ever Written is frustrating. In a sense, it’s fascinating to see their development, both sonically and lyrically. A lot of that Idlewild-ness remains in the thematic content, and it’s useful to have an anchor with the noticeable departure from their prior sounds.

But it’s also begging for jolt of electricity in places, but this’ll be where opinion probably divides.

This is a fan’s album, made for, helped by and a testament to Idlewild’s worshippers’ passion and patience. For some, the changes will be welcomed with flung-open arms like an old friend; for others, it might just be a little too much to handle.