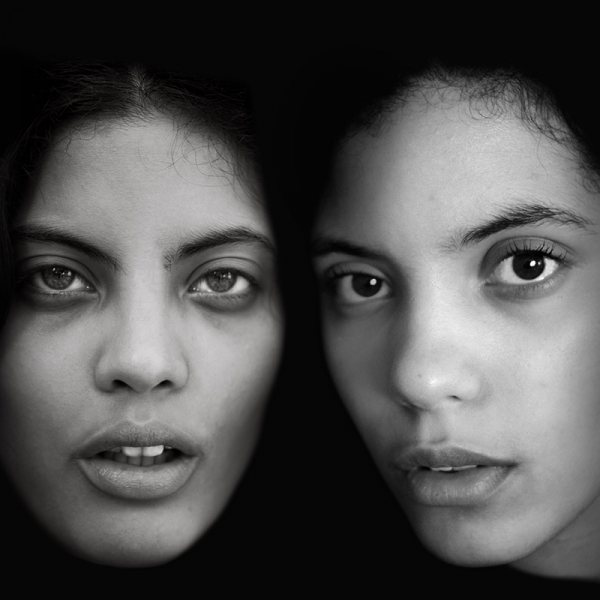 A tremendous hullabaloo’s been made about French-Cuban twins Ibeyi, who signed to XL Recordings in 2013, and for good reason. Naomi and Lisa-Kaindé Díaz, daughters of prominent percussionist Anga Díaz, combine their heritage – familial, geographical and ancestral (they also have roots in the Yoruba culture of West Africa) – to create a mesmerising fusion of pop, electronic experimentalism, Cuban folk, French jazz and acoustic R&B that spans for language barriers.

We’ve heard some snippets of their eponymous debut record in the lead up to its release. “Oya” smacks of Björk’s warped pop noises, with Ibeyi’s tangled harmonies battling a barrage of trippy percussion, and an uneasy sense of otherworldly malice lingering in the shadows. It’s smoother and more reticent than something like “Hyperballad”, but the progressive electro-folk-pop sentiment remains. “River” sees goofy piano steps bounce around doom-pop choirs, strutting preacher man snaps and off-kilter rhythm/language twists. It’s a tormented, volatile cut.

The debut’s almost bound to draw comparisons to FKA Twigs; they don’t sound much alike, but the XL link is hard to ignore, as is the fantastic usage of percussion, harmony and atmosphere. “Weatherman” could even be an LP1 offcut. They do differ massively in many respects too, however, with Twigs placing her own psyche and relationships under the microscope, and Ibeyi dissecting the big-picture stuff like life and death – and family.

“Mama Says” is well-known to be about their widowed mother’s grief after the passing of the paternal Díaz. “Think Of You” is the twins’ sonic eulogy – “We hear laughter and we think of you/we receive your spirit and we think of you…” – backed by horror movie strings and Flying Lotus-esque production. “Yanira”, drawing inspiration from Ibeyi’s older sister who died from a stroke in 2013, uses ritualistic ostinatos, heart rate monitor blips and wailing chants (“why did fate make you go?/will we meet in heaven?”) to convey the anguish in the family.

It’s not an all-encompassing anthology of agony that the duo have made though, with “Stranger/Lover” venturing into leftfield dance-pop worlds – a flurry of cymbals, slick double-bass grooves and Far East strings all coincide to create a kind of otherworldly elegance. As well as their ability to make you dance, like labelmates The xx, Ibeyi utilise space and silence to great effect, most obviously on “Singles”, a track with jazz flecks and lovelorn intentions. It’s not necessarily overt joy, but at least they veer away from the macabre at times to provide respite.

It’s a total package, using personal trauma and strength of spirit to conjure the emotional gamut, as well as using (ostensibly) innate talents for manipulating sound to keep you returning for more. It’s not just great because it makes you rubberneck; it’s got the capacity to make you sit back and go ‘whoa’.

Ibeyi make a bewitching kind of music that’s comparable in intent and structure to famed experimenters, but like said experimenters, they tread a ground entirely their own. It’s refreshingly unique. Ibeyi is an ambitious debut record from the twosome, and one that deserves to be heard by as many people as possible.