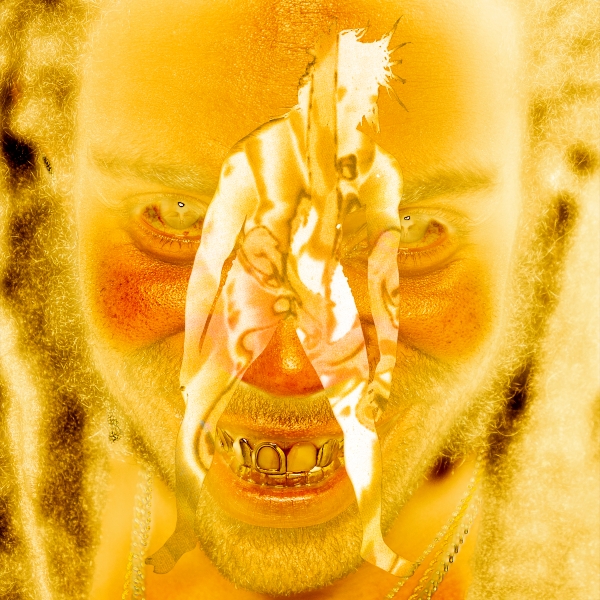 Whilst their aggressive, ear-drum-obliterating sound might not make it obvious, Ho99o9’s ethos is rooted in love.

Whether that’s a deep love for the rap, rock and punk music that nurtured them, or a deep love for ripping up the blueprint and carving their own musical path, the New Jersey via L.A duo’s second album SKIN is the fully-fleshed sound of the outsider refusing to exist on the outskirts anymore. The leaders of the Deathkult, Yeti Bones and theOGM, are officially back.

Sweating their way up from hometown gigs in tiny basements in America to the stages of prolific music festivals across the globe, Ho99o9 command the attention of all who cross their path. Terrifying to some and electrifying to others, the pair’s debut album United States Of Ho99o9 was an aural uppercut to the establishment, kicking holes through genre boundaries and pissing off gatekeeping fans of heavy music. On SKIN, they continue to re-invent the meaning of heavy, dousing listeners in their corrosive beats, visceral rap verses and doomy riffs.

Having Travis Barker on both drums and production duties for this album undoubtedly pushes the pair further into the mainstream rock spotlight, but if fans are expecting this collaboration with the pop punk icon to mean that Ho99o9 are veering into the same genre, they’re mistaken. Their ability to collaborate with the likes of Barker, Slipknot’s Corey Taylor, rappers Bun B, Saul Williams & Jasiah, whilst remaining authentically Ho99o9, is what makes SKIN such an exhilarating listen.

Full throttle opener “NUGE SNIGHT” – named after Suge Knight, the incarcerated former CEO of groundbreaking hip-hop label Death Row Records – sparks the chaos. Yeti Bones’ voice is catharsis incarnate, raging away over breakneck beats and cymbal smashes. He unleashes some of his strongest lung-work on the menacing “THE WORLD, THE FLESH, THE DEVIL” and proudly declares “Thou shalt not fuck with me” on “BATTERY NOT INCLUDED”, both showcasing his unfiltered, breath-taking energy. The OGM’s elastic voice is equally impressive throughout the record, ricocheting between guttural gasps and yearning vocals with ease.

Slipknot fans might be tempted to skip to “BITE MY FACE” featuring Corey Taylor, but the track hits harder if the adrenaline has been spiking naturally from the album’s offset, making the drop in at the 2 minute mark even more eviscerating. The trappy “SLO BREAD” featuring Bun B, one half of the southern rap duo UGK, provides a much needed breath before the duo smash through the swirling “...SPEAK OF THE DEVIL” and the riotous “SKINHEAD”, which blends the spoken words of rapper and actor Saul Williams into a mix of pure punk energy. Ohio rapper Jasiah adds to the seething, anti-establishment message of “LIMITS” too.

The superbly named “LOWER THAN SCUM” opens with a sample of a conservative female voice stating “this is hardcore psychopathic material,” which perfectly fits the aural assault that follows it. Antagonizing the status quo is what Ho99o9 were born to do, something that’s encapsulated in the blasphemous lyric of nightmarish closing track “DEAD OR ASLEEP” - “titties out for Jesus, bitch / keep the same energy.”

Listening to any Ho99o9 record provokes a strong physiological response, but on SKIN the band accelerate their bone-rattling, temperature-raising sounds with unrivaled tenacity. The flesh and blood that went into making this potent piece of self-expression is palpable, and it will be rattling the foundations of music venues when the pair take it out on tour.