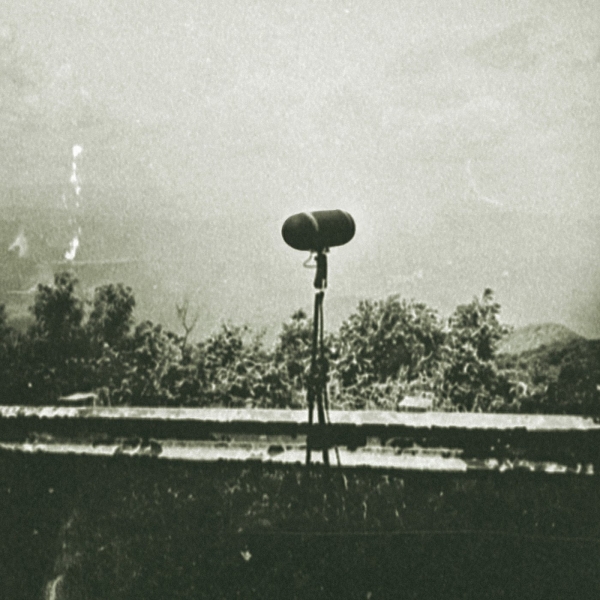 Shortwave Nights, the new album from sound-sculpting duo Hiss Tracts, essentially operates as a long-form collage, a glue-and-paste art project unfolding in real time. Consisting of Canadian post-rockers David Bryant and Kevin Doria (of Godspeed You! Black Emperor and Growing respectively), Hiss Tracts specialize in both ambience and ambiance, in finding both pointillist use for carefully culled sounds and emotive, cinematic effect for the album’s repeating auras of dread, unrest, and wonder. Indeed, Shortwave Nights is an apt title for the album, a forty-five minute short-film of strange buzzing sounds overheard in close proximity, almost intrinsically evocative of witching hours.

“Shortwave Nights” begins the record with slow-dissolve pools of shaped static, wavering feedback, and eventually, studiously prickly guitars and woozy strings, perhaps the only recognizable “instruments” in what is otherwise an uncanny field of source-less noise. “Shortwave Nights” (like the album it begins) works by offering sounds that are both intangibly familiar and eerily otherworldly. Certain tones strobe like industrial machinery, other noises chatter and buzz like insects. The whole thing has the strange aura of small towns glimpsed from the highway, an almost Lynchian quality of weird familiarity. You could image “Shortwave Nights” soundtracking the early, mournful moments of a film like Capote, undercurrents to still-life images of Midwestern devastation, wheat and straw wafting to the sounds of the organic and synthetic tied in knots.

The texture is slightly more three-dimensional on second track “half-speed addict starts with broken wollensak,” a briefer song whose fibers consist of more recognizable instruments and sources. Yet that tangibility doesn’t make the song any less unnerving, and the jittering layers of piano that ring throughout sound like the bell ringing over Ebenezer Scrooge’s door – meaning you spend the whole song waiting for the ghost of Jacob Marley. Indeed, there’s something spectral about the free-floating waves of noise that do eventually rise to envelop that chatter of harmony, like a blossoming fog. But that haunted-house burst really arrives on the following piece, “slowed rugs,” which largely consists of soft-focus reverb and lightly grinding noise until the song’s final minute, where the pulse begins to accelerate till the whole thing eclipses into a twirling symphony of clanking noise.

Given the blue-black pallet of the album’s opening third, a slow-tide churning of electric byproduct, it’s both a welcome and startling change when “drake motel - 9 gold cadillacs” begins with the friendly buzz of a slurring harmonica. Eventually an aged voice begins to philosophize on sharing harmonicas, on exhaustion, on family history, on the Bible, as a curling afterthought of acoustic guitar entertains itself in the background. It’s an entirely different sort of “found sound,” the kind of thing Alan and John Lomax might have recorded on a country store porch in the Depression-era Mississippi Delta, rather than the carefully pitched abstract impressionist slow-drips of the rest of the album. As such, there’s a warm comfort to “drake motel” that is emphasized by the eerie, aggressive, caustic elements that surround it. That the interlude is barely a minute long, compared to the five-plus minute spans of songs like “slowed rugs” speaks volumes about the headspace Bryant and Doria are most interested in building – and maintaining. And sure enough, “windpipe gtrs” follows that respite with a gloaming moan not unlike a foghorn, hanging in the middle distance in queasy dissonance. In fact, that singular sound constitutes the entirety of “windpipe gtrs,” the minute changes in texture and harmony and aura being the only thing that makes the piece anything other than three minutes spent with one singular drone. Your appreciation of such a passage of course hinge largely on both your tastes and patience. An earnest appreciator of such sounds would call this “connoisseur music” (or some such euphemism), art to be appreciated for its ultra-fine details; a more cynical listener might call it bullshit. Likely its somewhere in the middle, and Hiss Tracts’ dedication to minimalism, precision, and delicacy is impressive, even if the results ask a great deal of the listener, bordering on ponderousness. Of course, Spotify and iTunes have insured that we’ve never been tasked with less; perhaps a true believer would call “windpipe gtrs” something like an antidote. There are worse things than music that asks you to invest.

The rest of Shortwave Nights is more kinetic, more chaotic, more willing to unsettle the listener with sudden bursts of cacophony and atonality rather than the creeping dread of something like “windpipe gtrs.” “halo getters” and “test recording at trembling city” both spend a certain amount of time cycling in slow-motion before taking sharp left turns into wild caterwauls. The latter is especially affecting. Clocking in at over seven minutes, “test recording at trembling city” is the album’s second longest song, and its most beautiful, wavering in an oddly pleasant equinox haze, not unlike the only-slightly off-kilter etudes of Stravinsky, before suddenly falling apart in harrowing shambles (again, like Stravinsky). “test recording at trembling city” gives the listener its best version of what Hiss Tracts does, creating bordering worlds that either slowly eclipse into one another, or else violently collide. The surrounding album excels when it approaches that sort of cinematics, and falters when it all but requires whatever accompaniment you might bring to it – say a good book perhaps.