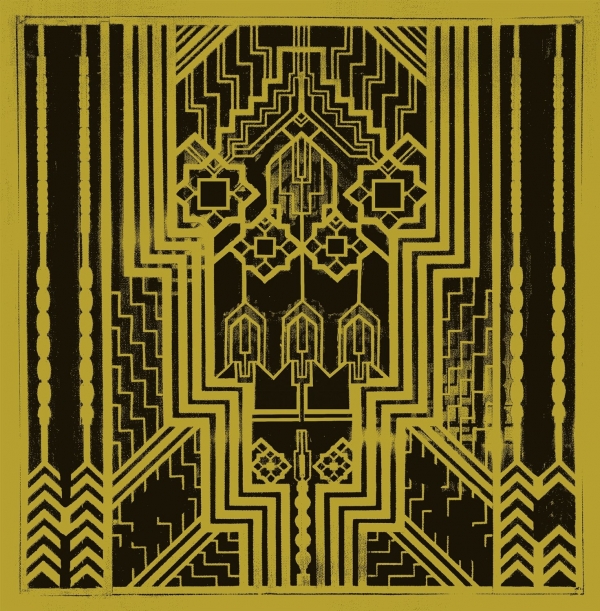 Puzzled? After the first four minutes of In Black and Gold you might be. Was there a cock up at the record pressing plant? Isn’t this a Vangelis tune from the Blade Runner soundtrack? As it unfolds and the dreamy vocals kick in you’d be tempted to think it’s a long-lost Spiritualized song. But as the song’s title mischievously suggests: “Hold On”. It’s good advice, because aural relief is on the way in “Sisters and Brothers” – a tune that slowly throbs its way into existence with frontman and chief instigator Paul Sykes waiting in the darkened wings for the chance to pop out and snarl: “You can’t wake up! Turn on the lights again!”

As head fakes go, it’s an effective one. But for the high octane British sextet this curveball is hardly the exception on their eighth album – it’s the new rule. Yet things quickly get back to firmer and freakier footing with “Hey, Dead Eyes, Up!” as the ugly guitar licks and Rhys Llewellyn’s percussive juggernaut is whipped into a devilish frenzy as the irascible Sykes implores: “Lie / Cheat / Steal / Do what you feel / Feel / Good / Do it again,” with a worryingly large grin on his face. It may only be three short minutes, but its colossal grind and ugly final freak out are the first clues that this is the same band which created the hookah-hitting triumph of an album Cuckoo Live Life Like Cuckoo just one year ago.

However, the addition of synths and other newfound programmed oddities adds a sinister veneer to the proceedings of In Black and Gold, casting an uneasy haze over the music which pays off in dramatic fashion. “Wired_Brainless” follows – and it’s just plain creepy, with Sykes exhaling in menacing fashion as the scuzzy, angular guitar attacks build up with impressive accuracy behind him. Sykes’ singing veers into a nasally Ian Curtis-esque pitch of alien detachment as he references a ‘bomb’ that he can ‘taste’. The five-minute song also relishes in its expansive denouement by fizzling out in a blaze of chaotic six-string assaults with the most delicate of drumming and Joe Thompson basslines. Boom.

To appreciate the band’s newfound less-is-more approach look no further than the album’s centrepiece, “Black and Gold”. It’s the undoubted highlight of the album and sees the song almost fall apart in its troubled, psychotic Western chime. Once again, Sykes leads the creep-fest, singing obliquely: “I write in black and gold / At the centre of a story that can now be told / Tied to a golden ball and chain / Shoes full of water from the pouring rain,” signalling to the band’s three guitarists that it’s time to let loose. Yet no matter how super-sized the riffs get or how pummelling the tunes threaten to become, there is never a sense that the band has lost control. The dynamics, from hushed drones to uncomfortably oppressive power chords, are never overcooked and always in proportion to the larger picture – however monochromatic the results.

Yes, the primordial edge and sunken depravity of the band make the guitar-heavy album seem refreshingly familiar in its outlook. However, the strummed acoustic guitar and ambient swirls of the almost ten-minute motorik jam “Lagos Atom” show a band reaching the farthest outpost of its sound without managing to lose the plot. In contrast, it’s followed by the stomach-crunching “Eat It” which returns the listener to the band’s much-loved colossal riffdom. It’s also the song which almost caused the crowd at the band’s album release party at the Lexington last Saturday to spontaneously combust.

Finally, it winds down with that “Sinking, Feeling” – an apt state of macabre affairs for an album that thanks ‘the drug dealers of SE4’ in its liner notes. One must conclude they may have lent a helping hand in the recording process during the band’s stay at Camberwell’s Dropout Studios. Whatever the intake, they finally made a wholly cohesive album, full of startling artistic quality and conceptual brilliance.

In that sense, In Black and Gold stands as a rare album that is a mystifying as it is powerful, dark as it is joyous. And despite the odd misstep, it deserves to be lauded as the band’s finest hour as well as a genuinely bold adventure into the cosmos of heavy rock.