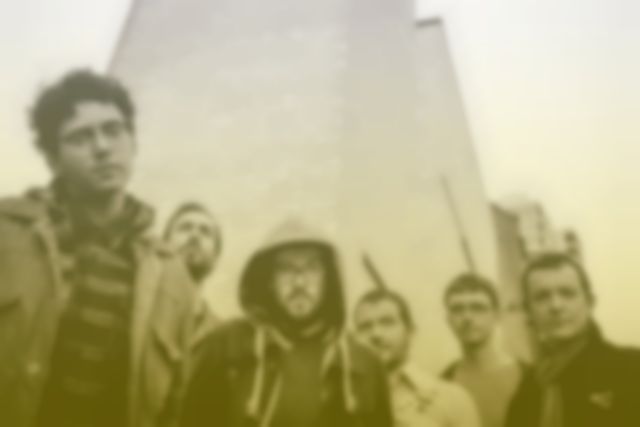 “The best way to release a record...” That’s what Hey Colossus had to say after they unveiled their new album, In Black and Gold, with a riff-tastic party at the Lexington. And they’re right. Not only can the far-out British rockers always be relied upon to deliver onstage, their chosen support acts made sure the party was killer.

Kicking things off was the aptly-titled Reading four-piece Workin’ Man Noise Unit. Not afraid to put in a shift, the guitar/bass/feedback loops/wild drumming combo did their best to give birth to the musical lovechild of The Stooges and Wolf Eyes in stunningly industrious fashion. Powered by a drummer who can simultaneously gob and fill with stunning alacrity, the room quickly filled.

With the amped up sweaty boys out of the way, it was the turn of three composed lasses living in London – hailing from Ireland, France and England – who call themselves The Wharves to flip the script and unveil their spaced-out minimal rock. The startling dual vocal battle, courtesy of bassist Gemma Fleet and guitarist Dearbhla Minogue, provided cheery interplay as they found their groove, all while Marion Andrau pounded away on her kit in thunderous oblivion. Think Best Coast – but a lot more stoned. And if it helps, the band revealed the next morning via Twitter that they had stolen all of the brie. Case closed.

By 10pm, the sold-out Lexington suddenly felt the crush as the six-strong Hey Colossus noiseniks took to a stage they play at least once a year. As a result there was none of the unfortunate soundboard disappointments from their Raw Power festival appearance last autumn. And unlike then, all six members fit on the stage properly. And from that height, they proceeded to spew forth a colossal heap of gigantic riffs amidst a gurgling sea of unhinged drumming, while frontman Paul Sykes did his best to out-creep The Cramps with his effects-laden singing.

But while Hey Colossus have always done heavy well, In Black and Gold takes their penchant for the dramatic and adds an unexpected sense of delicacy to the proceedings. On Saturday night, this shift from raw power to diplomatic persuasion set their new songs apart from their previous efforts. Notably, it was the glacial unfolding of the powerful “Black and Gold” that ably demonstrated this impressive creative progression.

It spikes early through an anguished Sykes howl before it settles into its stained armchair, cracks a beer and tells its darkened tale of ‘lost innocence’. Sykes has spoken of the new album being one of ‘rebirth’ and it rings true here as the clever song changes time signature, slowly assembles its layers and harnesses its motorik groove while still leaving room for a killer guitar solo to walk in like a thief in the night and steal your heart.

“Thanks… Thanks… Thanks… Thanks… Thanks…” Sykes says between songs, his processed voice mangled into an endless murky echo as he takes a break from channelling a dark majesty that would have impressed Bauhaus legend Peter Murphy. And the new songs see the band embrace this wizened ambience, but their Lexington mission seemed to be the best of both worlds – their legendary power and their newfound control. Meanwhile the brutal “Eat It” invites the crowd to explode into a vicious bout of writhing and headbanging with its sludgy riffs and apocalyptic climaxes choking the air.

When they were done, they were done. No encore ( t though they would have been forgiven for milking it a bit more, it was their party after all…, and no gushing, just a wave. The black of the night was all that was left after their golden hour-long set.