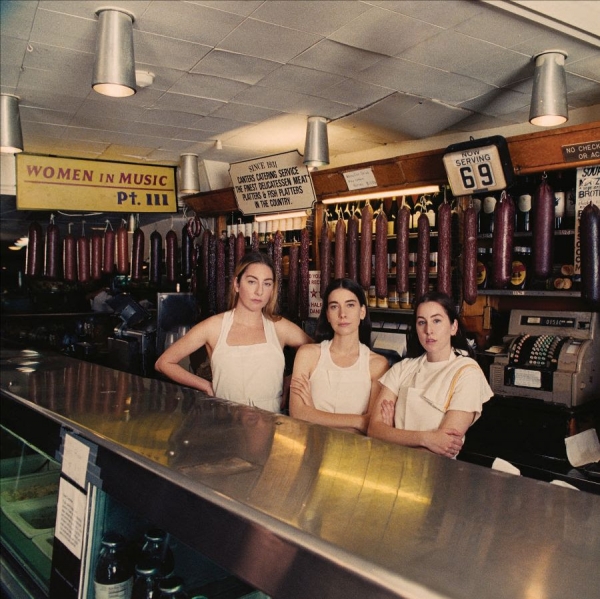 Having fought for many years to shun the association with the derogatory term of being known as ‘girls with guitars’ rather than musicians who are proficient in their craft, Haim’s statement on Women In Music Pt. III is a confident and emboldened departure from feeling like they have something to prove.

Despite having that undeniably infectious So-Cal cool radiate from every fibre of their being, WIMPIII ironically starts with Haim toying with the idea of wanting to leave Los Angeles and subsequently, it feels as though the trio have found themselves wrapped up in the whirlwind of ‘70s New York during the birth of punk, hip-hop, disco and new-wave in their longing for a new scene. The opening moments of “Los Angeles” are a flurry of notes from a baritone saxophone that serves as a thread which binds the album together, finding its way back to the forefront during the album closer “Summer Girl” – the epitome and amalgamation of an experimental jazz-fusion which permeates the record. There’s an infectious nonchalance that seamlessly flows from song to song proving that sometimes there’s more of a prominence in the simplicity of music.

As the album unfolds, we are introduced to different paradigms in the shape of vocal effects, distinctive guitar tones, and even the knocking on wood in order to convey the evocative and organic nature of feeling. The slightly distorted vocal in “I Know Alone” is followed by an ever so slightly delayed echo which summarises the subtle out of body experience that you feel when you’re truly down in the dank cavern of your own mind, whilst the psychedelic hues in the Hendrix-style guitar playing in “FUBT” harks back to the idea of the instrument as an extension of the voice.

WIMPIII culminates in a kind of languidness which shows that sometimes you have to let the songs lead you, rather than coercing them into something they shouldn’t be. There’s a coherence that exudes from the sparsity in the songs, and they’re never left feeling empty. “Up From A Dream” opens with a yawn that precedes an electronic dream world reminiscent of Blondie’s “Call Me” seeped in hypnagogic form, and whilst the lyrical content is a slightly nonsensical, there’s an innovation behind the instrumentation as they explore new sonic terrain.

Serving as a response to all of the misogyny that they’ve ever faced, it speaks volumes that “Man In The Magazine” is the most stripped back song on the album. Almost snarling the words as if many years of disdain have been built up for that moment, Danielle’s reproach: “you don’t know how it feels to be the cunt” echoes the art of blunt simplicity which is rife in Women In Music Pt. III. Despite the lyrical content bearing no relation, the subsequent scratchy pop-rock guitar that follows the cacophonous gristly screams in “All That Ever Mattered” could perhaps be seen as residue of the underlying rage of it all — an attempt to purge the negativity and continue on with their infectious summer vibes.

Even though the title of the album is somewhat ironic, it also serves as a message that there shouldn’t be a distinction for so-called ‘women in music’ because Haim are just as multifaceted and capable; if not more so than any of their contemporaries.