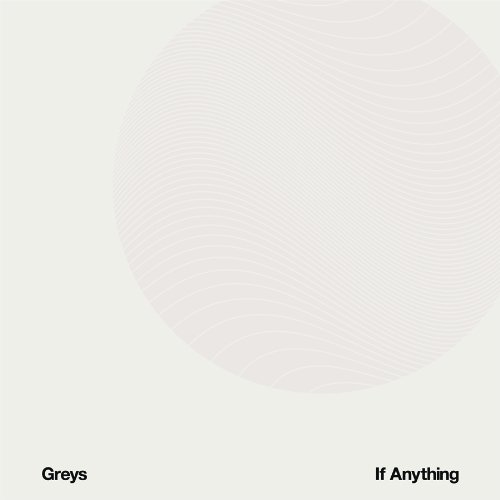 If Anything, the debut album from Toronto quartet Greys, is a remarkably assured, resolutely compelling thirty-five minutes of sharply-angled punk rock. Built with nervy precision from a churning, agile rhythm section and a twinned sheet of guitars that variably roars, tangles, and laces with the exactness of a fine-tipped pen, Greys manage the difficult task of breathing ecstatic life into a three-decade record collection worth of hardcore, post-punk, emo, and art rock while sounding utterly vital. Greys offer an album steeped in punk modernism and retro-futurism that somehow avoids all the mustiness and stale air of the museum. Irreducible to either memories of abstract hardcore’s early-90s golden age or the blinkered tepidness of nostalgic reproduction, Greys instead create something at once thrillingly vital and intangibly archetypal.

If critical consensus is more or less in agreement on an emo renaissance, founded around bands with deep allegiance to and affection for American Football, Cap’n Jazz, and Braid, then we might look to If Anything and consider a similar new classicism being founded around the high-points of post-hardcore. Indeed, the abrasive corners of bands like Cloud Nothings, The Men, and Metz all underline something like a new wave. In that sense, Greys are undoubtedly leading figures, despite a brief discography and a short tenure. If Anything has the barbed, cubist quality of post-hardcore’s most salient masterpieces. Guitars land in enormous walls like the shattering swells of Jawbox. Vocalist Shehzaad Jiwani has a knack for the satiric sing-song of Hot Snakes. At its thickest, If Anything verges on the murk and churn of Quicksand. And of course one has trouble ignoring the consonance of the band’s fitted angularity and blue-noted rhythm section with the similar soundscapes of Fugazi – with or without the album’s opening name check of Guy Picciotto.

Yet this would all be cheap revivalism if the Greys’ debut full-length wasn’t also such an excellent, thoughtful, near-perfect punk album with its own ideas and sparks of energy. The record lurches and needles in matched, unwavering precision. Its heaviest, most monolithic eruptions (“Flip Yr Lid”, “Brief Lives”) are as athletic as its most taut, wiry snarls of guitar (“Girl In Landscape”, “Lull”). At times, If Anything has the sheer mass of a rogue wave – especially on the crashing peaks of “Use Your Delusion” and “Adderall” yet the band handles these seismic passages with the casual confidence of four young artists who seem preternaturally sure of what they want their noise sculptures to sound and look like. Greys are a band who’ve mastered the crooked side-streets and secreted alleys of byzantine hardcore impressionism. Their gestures and volleys get to where they’re headed with aplomb, almost no matter what.

“Guy Picciotto” begins with a burst of cycling noise over which guitars bend and hum in half-tonal abandon, Jiwani matching their anarchic melody with equal parts joy and snarl. The song, here and gone in under two propulsive minutes, operates on a principle of shaped chaos, like a torrential wind gusting through a tangle sheet. “Use Your Delusion” is built from muscular, circling strums (the rhythm section of Braeden Craig and Colin Gillespie excels at this sort of whirring athleticism) that might remind you that Foo Fighters were once one-half Sunny Day Real Estate, the song’s gnarled, complex surface belied by its elemental hook “Just go / Just Go!”. “Flip Yr Lid” is similarly built, its chunked guitars landing obliquely in groove-oriented shards. “Adderall” is the album’s most sere surface, a forward-oriented, stream-lined dynamo whose aero-dynamism reveals its only knot in verses that bend in strange tempos like the warped So-Cal punk of Drive Like Jehu. Penultimate track “Brief Lives” is similarly deployed for momentum, and similarly tangles itself up along the way, its fleet precision working under a gnarled vine of corroded, churning bass.

The band also excels at making their sharp, lashing expressionism actually do something. “Chick Singer” is a sinewy jaunt of Sonics-esque garage punk, but its narrative is deployed as a piece of advocacy, a trenchant, insightful critique of punk rock chauvinism: “Yeah it’s cool that you have a chick singer / Nothing’s hotter than a girl on bass.” Jiwani’s voice drips with sarcasm as he outlines the misogyny of punk’s unfortunately evergreen bro-isms and the ways in which hardcore has frequently presented an unsafe space for women: “Good for a girl / Good for a girl / Good for a girl/ Fuck You.” If there are very real echoes of Revolution Summer D.C. punk modernism in Greys’ aesthetic, then its perhaps even more gratifying to see a band equally committed to the progressive politics of post-hardcore’s most fertile era as they are to its angular top layers. If a lot of If Anything seems given over to half-smirking nihilism, “Chick Singer” immediately reminds you of an under-current of ideas at work here.

There is also odd beauty to be found in the album’s denouement, especially the weary five minutes of the record’s closing song, “Lull.” More spacious than the rest of the album, which is frequently characterized by spiraling clutter, the song begins with a simple, lovely, pivoting guitar figure and a humming bass, a mood-heavy open field over which the band slowly builds, accruing distortion and haze and increasingly complex sprigs of guitar until Jiwani raises into a shout and the whole thing bursts. Eventually “Lull” simmers back into a surprisingly gorgeous major key, a clean expanse of trickling emo reminiscent of Appleseed Cast or American Football or the more luminous passages of Piccotto’s Rites of Spring, Jiwani crafting a charming lullaby of a melody to match the bridge’s airy optimism. It’s a fascinating glimpse of possibility for Greys, a newfound balance wherein the sonic gales that surround that moment of softness end up sounding that much more monolithic; the corresponding sunniness that much more poignant. It’s a wonderful, arresting coda to one of the best albums of the year so far.