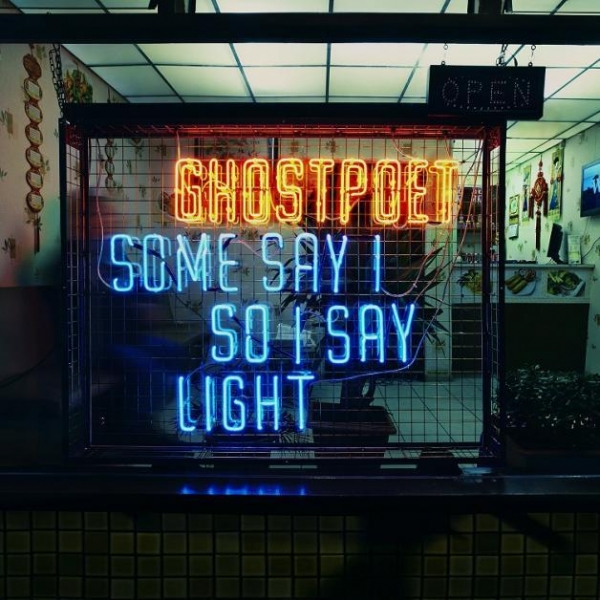 2011′s Peanut Butter Blues & Melancholy Jam was a definitive statement for Obaro Ejimiwe, better known under his Ghostpoet guise. As debut records go, he couldn’t have really had done it better: it was a phenomenal effort combining elements of British grime and hip-hop, as well as the sparse electronica of James Blake or Burial. It scored him a Mercury nod, support slots with the likes of Metronomy and appearances at festivals nationwide. Two years on he returns with his second full-length, Some Say I So I Say Light, ready to succumb to the gaping maw of the hype machine. With such a compelling première outing, will he crumble under the pressure of delivering something that lives up to expectations?

Accompanying Ejimiwe’s unique vocal style, which bears similarities to operatic sprechgesang (it lays upon the border of spoken-word, rap and singing), is an arsenal of talented guest vocalists. On ‘Dial Tones’, one of the standout cuts on the record, a morose, strung-out Lucy Rose offers her brittlest vocals to the fray, contrasting the wired-ness from Ejimiwe. It’s a lonely 4am anthem with desolate synth creaks and other gizmos buzzing like the background noise of a city at night.

Woodpecker Wooliams contributes to ‘Meltdown’, the lead single, for an impeccable chorus ripe for a dancefloor-ready remix. The lyrics tell a tale of the aftermath of a broken relationship, “You and me weren’t meant to be, and someone, somewhere knew it from the start.” It’s brutal in its honest account of torn victims and the unstoppable rifts that occur during the denouement of love. Other top notch guests include Dave Okume, Charles Hayward and Gwilym Gold.

Blurring the lines between genres has always been Ejimiwe’s forte, fusing a chilled-out electronic sound with hip-hop beats and semi-rapped lyrics. It’s a kind of late-night sound he’s nurtured, and on Some Say I So I Say Light, he’s gone even further with experimenting – injecting orchestral flourishes, woodwind waves and ’90s porn-groove guitars. At times, futuristic R&B rears its head, and just as he begins galloping in one direction, he lurches towards somewhere new.

The tone remains pretty consistent throughout, and often the pace is carried over from track to track, but it’s his variety of instrumentation that keeps us interested in spite of the structural/temporal safety. It would’ve been nice to experience some differentiation in terms of overall ‘feel’, but his sharp, poignant lyrics and beautiful noises keep us enthralled nonetheless.

‘Plastic Bag Brain’ is home to earwormy country-rock riffs and ticking hi-hats. The music grinds in the depths as Ejimiwe’s voice floats, almost disconnected, the sounds mimicking his words: “I am here/ Standing by the river/ Head to toe in shivers/ I wonder where you are.”

‘Comatose’ is all muffled percussion, howling wind pads and sacrosanct organ melodies. Breathy, strained vocals gasp over the top, with no effort made to conceal the topic: “I feel like the whole world has turned its back on me”. In the final moments of the album, uplifting conga noises and luscious string washes saunter into the mix, alleviating the hopeless (as in devoid of hope) mood.

Ghostpoet had a genuinely tough task ahead of him at the start of this record. After such a successful debut, it would’ve been all to easy to buckle and bow out, or churn out something overwrought and/or naff. However, considering the enormity of the task ahead, he’s prevailed, crafting a collection of songs that push boundaries and contend as great post-hip-hop. There is plenty to get excited about here – perhaps he could have changed up the tone a tad more, but the only negatives are mere minor gripes. It’s might not quite exceed Peanut Butter Blues…, but it certainly isn’t worse.

This is a pleasant plateau he’s found himself on, and it’s a perfect launching platform for further, more avante-garde endeavours.