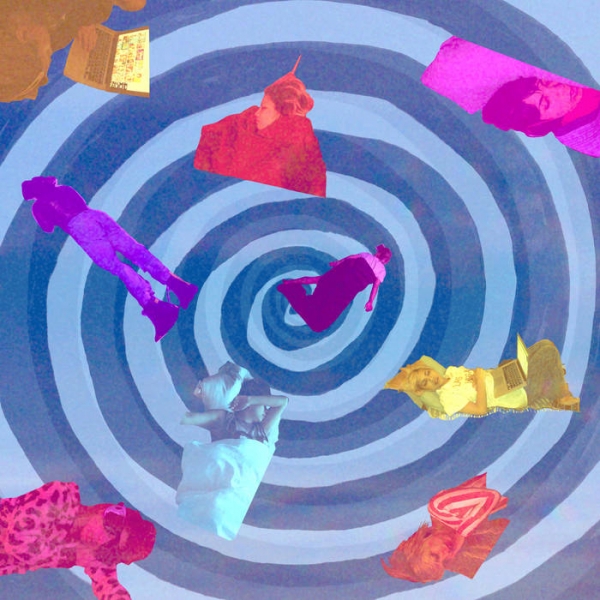 Her music is both tooth-numbingly sweet and a numb, dissociative self-critique: imagine hugging yourself on the beach, weathering an MDMA comedown while your friend’s GameBoy chirps beside you. Coloured snapshots of Artadi in bed on the album cover mirror the jittery, tired spirit of the record —Knower’s machine gun drum and bass pop has seeped into her dreams, but she just wants to get some fucking rest, you know?

Dizzy Strange Summer is Artadi’s first release with Flying Lotus’ oddball Brainfeeder label. The album fits in perfectly amongst the label’s catalogue, blending jazz chops, electronics and psychedelia to examine (not without some humour) the lower points of the human condition — the dissociation, loneliness, and ennui of the Los Angeles musician.

The album front loads frenetic dance tracks and devolves into dreamy rumination. Double time drums and electronic percussion jitter over hovercraft synths and intimate bedroom vocals like cold water rushing over stones in a virtual reality zen meditation video. Bass, whether sequenced, played, or sung - though insistently busy - is often low-passed, throbbing along in the background and leaving the midground vacant for the dreamscapes invoked throughout.

The scope of Dizzy Strange Summer is ambitious, vacillating from a cappella IDM to strobe- light nū jazz to delicate harp ballads. The woozy detuned synths and plodding nouveau-disco beat of “Living Like I Know Im Gonna Die” evoke indie sweethearts like Men I Trust and Blood Orange. Elsewhere, "Will You Tell Me” and “Before the Dark” are small, sad confessionals, while the LA jazz scene is called upon in “Edge of the Cliff”, “oo yeah”, and “Nowhere to Go”. The latter, with its ever-climbing sawtooth chord pattern is perhaps the most Brainfeeder-y tune on the record, with an unrelenting dephased barrage of in your-face bass, a choppy, bouncy beat, and a minute-and-a-half runtime. It pounds through, and yet Artadi’s vocal performance is aloof and somehow dismissive, as if removing herself from the mad LA scene even as she contributes to it.

When it hits the mark, the album provides a unique window into Artadi’s cyberpunk blues. The problem, though, when an artist tries to cover such a broad range of sounds and emotion in a single album is that the record can end up sounding more like a collection of songs than a cohesive whole.

As the last two thirds of the record sparkle by in floaty Ambien-tinged dream states, Dizzy Strange Summer might seem to run a bit too long. “Is What You Believe”, with it’s plodding 6/8, and a feeling of transcendental, sadly stoic acceptance, feels like an end credits song. Yet it is followed by a half-dozen more tracks that dig deeper into the same melancholia. Though the songs are short, the ephemeral floating quality of the bottom 66% of the record may find listeners nodding off or staring into space, only jerked out of their reverie with the absurd coda: "cupcake5" — an unconvincing “no, no, I’m fine, really” in the form of a Nintendo bossa.

Despite being informed by the frantic LA jazz scene (and featuring several high profile musicians therefrom), the album remains an accessible collection of songs. Eccentric at times, yes, but did we expect anything less? A tired “fine, fuck it” acceptance of perpetual depressive discomfort like an ache you learn to live with.