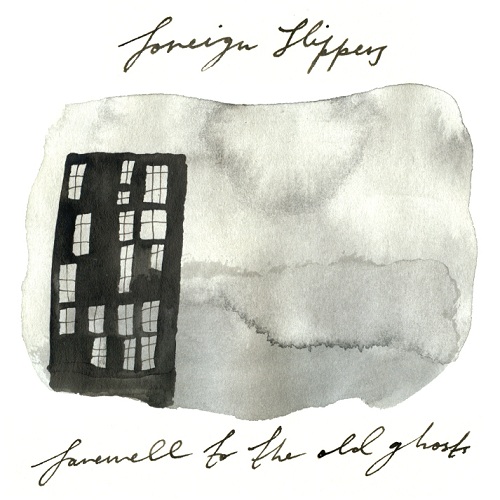 “We’re on the right track”, cries Gabi Frödén in one of the most memorable moments early in Farewell to the Old Ghosts. That statement might have become a mantra for the Swedish singer-songwriter, whose debut LP has been in some form of gestation for three and a half years. Back then, the fragile and beautiful Oh Death EP was released, a hidden gem of folk-pop unnoticed by most but hinting at rich potential for bigger and better developments. In the intervening time, Foreign Slippers has morphed from solo project into band, released both additional EPs and a prototype version of this album, and won the crucial support of Belfast benefactor Duke Special. How appropriate, in a way, that an album often concerned with excising old demons and moving on with life should prove to be so difficult to make and yet so rewarding.

Now based in the UK and surrounded by a group of capable musicians – not least her husband, drummer and longtime fellow traveller Phil Wilkinson – Frödén grew up in Nörrkoping in eastern Sweden. Singing in the local church choir lead her to form early bands which developed her vocal skills mostly through the medium of Pavement and Tom Petty covers (as old habits die hard, a version of Petty’s ‘I Won’t Back Down’ appeared on last year’s Avalanche EP). As befits Frödén’s experience and the long recording process, Farewell is an accomplished and immediately likeable folk-pop opus which runs the full gamut of emotions provoked by its redemptive theme.

‘It All Starts Now’ began life on an early EP of the same name, but reappearing here as the natural opener it summarises Frödén’s basic message that “we’ve got days to live/To make up all we’ve missed” and that life is ours for the taking. Musically, it demonstrates the bigger scale of Farewell‘s ambition, growing from a single, ringing acoustic guitar to a grand swell complete with backing vocals, organ and handclaps. At the other end of the album’s bright tapestry of moods is ‘There is Dead Inside’, an apocalyptic lurch in which Frödén, at her lowest ebb, is informed by an angel that she is somehow contaminated, seemingly vampiric: in a beautiful twist on her own angelic vocals, she asks “Do you really want to walk outside the village with me/Knowing what you know?”

Between these two extremes of positivity and corruption there lies ample room for Foreign Slippers to manoeuvre. One of the songs which is new to this modified version of Farewell is ‘Under Your Ribs’, which has Frödén doomed to sabotage a relationship and leave a lover hanging. Appropriately given its dark theme, the song is harder and much more electronic than any previous Foreign Slippers cut, and is punctuated with a guitar solo by Matt Jones which also edges the band closer to rock territory than ever before. Rather happier is galloping and similarly new effort ‘Thank the Moon’, which alternates between atmospheric verses and an athletic chorus primed for radio play.

Foreign Slippers’ sparse early work was crying out to be followed up with bolder, grander efforts and these all impress on Farewell but Frödén’s gift for the slow-burning and the tender have not fallen by the wayside. Indeed, the significantly re-recorded ‘Two People in You’ and frail, piano-led closer ‘When You Feel the Fear’ are among the strongest moments on this superb record. A true labour of love and as slow-burning and rewarding as its own creation, Farewell to the Old Ghosts is one of the strongest and most inviting folk-pop debuts of recent times and a fine introduction to a real emerging talent.