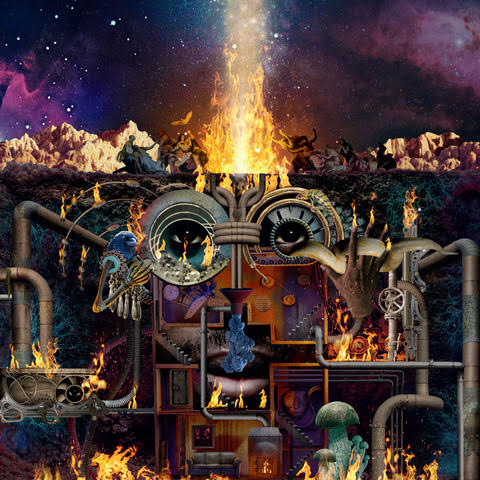 When Flying Lotus released his fifth studio album, the bold, pysch-jazz odessy You’re Dead, he did so into a world where his sound was, still, largely anomalous.

In 2014, the mainstream landslide towards rap was just a few falling rocks, and the bushy-tailed youth that would reignite jazz were in the wings, waiting to star in their perhaps unlikely coup. As we've seen with other similar torchbearers, it's entirely for possible the movements you helped build to subsume you – to emerge years later and find that the kids have figured it all out.

But – nope. Not Steve Ellison. Flamagra shows that FlyLo's sound – still not hugely revolutionised since his previous effort – is basically way too future for all of us. A mammoth collection of dizzying ensemble jazz, rap and electronica stamped by mad eclecticism, the LP is a brilliant – if a little bloated – statement of superiority.

In the blurb, Ellison loosely paints Flamagra as a concept album, having been haunted over the years by “a lingering concept about fire, an eternal flame sitting on a hill.” It kind of holds up – certainly the spiritual mantras that bookend the record, spoken in the rumbling tones of some presumed fictional God, give the album a temporality. But once the ride gets going, the flames endure primarily through lyrics (see David Lynch's prophesising monologue on “Fire is coming!”), the sound ever shifting with Ellison's attention span.

The LP hosts some perfectly formed slices of hip-hop, where the album is at its most accessible. The Anderson .Paak-featuring “More”, minus it's jam session opening, locks into a luxuriant, slow-build of a beat that wouldn't feel too out of place of .Paak's recent stellar offering Ventura. Elsewhere, Denzel Curry makes a blisteringly political appearance on “Black Balloons”, FlyLo's swirling and string-heavy take on boom bap, complete with '90s rap gospel stylings. The gorgeous cut-and-paste glitch hop of “Post Requisite” is the kind he and pioneers like Prefuse 73 blew up in the mid noughties, and “Actually Virtual” is a delay-soaked throb of percussion, held together by poetry from Shabazz Palaces' Ishmael Butler.

Elsewhere, Flamagra constitutes tight jazz freakouts (“Inside Your Home”), cinematic make-out jams (“Land of Honey” feat. Solange) and the prettiest of funk duets with long-time collaborator Thundercat (“The Climb”). Somewhere in the middle (it's easy to lose your place), a flutter of sequencers introduces the celestial “Andromeda”, all too short, and its sister “Remind U” – a xylophone-filled romance of a beat. As always, each composition is overstuffed with goodness: repeat listens drawn out missed hooks and unexpected counterpoint, hiding in every corner.

Yes, there are a few missteps – perhaps the whopping 27-track runtime being the biggest. In his more off-the-wall moments, it does feel like Ellison is primarily entertaining himself: the cutesy “Heroes in a Half Shell”, for example, holds little weight, sitting somewhere between Mario Kart hold screen music and elevator swing. "Yellow Belly", featuring the usually excellent Tierra Whack, is hard to like: a rolling series of suspensions that never really resolves, where perhaps the duo's shared tendency towards silliness pushes the track too far (Tierra's on particularly incoherent lyrical form here, the beat a lolloping collection of claps and snares that's so off-the-bar it's just off.)

But – and this, I know, sounds like a cop out – FlyLo is the trickiest of acquired tastes, and some listeners just really won't have the patience to wait for this LP to unfurl. For those who do, a reward awaits. Flamagra, like the man who made it, is an island of its own: often beautiful, sometimes baffling, totally inimitable.