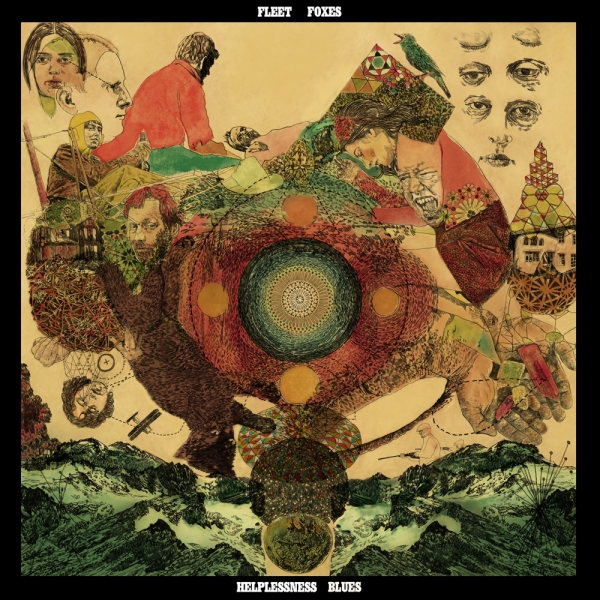 It’s always a bit of a touch and go situation, reviewing the follow-up to an album that means an awful lot to you, which might explain why it took me a good two weeks to listen to this album after receiving it. The hype around Fleet Foxes kicked off earlier this year when ‘Helplessness Blues’ snuck onto the radio, a track that had Fleet fans all over the world quivering at the knees with anticipation for the Seattle collective’s follow-up to 2008′s gorgeous Fleet Foxes. In the three years since the last album was released through Bella Union, we’ve had some unforgettable shows, the release of ‘Mykanos’ and a couple of enchanting Jools Holland sessions, but now that spring is well and truly upon us, the ideal moment for Helplessness Blues to be unleashed has arrived.

The album opens with a soothing, quietly picked guitar melody before Robin Pecknold’s unmistakeable vocal utters the opening lyric “So now I am older than my mother and father / When they had their daughter / Now what does that say about me?” over the delicate, musical backdrop. Hushed tones are created by soft backing harmonies, as the song reflects on age, responsibility and heritage. ‘Montezuma’ is a lush, lilting introduction to the band’s second album, an irresistible track which leads swiftly into ‘Bedouin Dress’, a slightly faster paced but equally as sentimental song.

Rhythmically, Helplessness Blues is a very gentle album. In line with their previous work, percussion makes understated contributions to the tracks, with Pecknold preferring to pick his own rhythms on his acoustic guitar and to allow vocal harmonies to create the dynamics of the songs. ‘Sim Sala Bim’ is a perfect example of this. The track opens with sincere, yearning vocals accompanied by just an acoustic guitar which, by the end of the track, becomes the driving instrument of the composition. The introduction of ‘The Plains/Bitter Dancer’ is a good occasion to hear how the band use vocal harmonies which build and build, eventually reaching a strength powerful enough to blow a house down. ‘The Plains’ leads into ‘Bitter Dancer’ which, following a fairly yearning introduction, becomes a gloriously bright, immersive track.

So much of the beauty of Fleet Foxes music is found in the lyrics of the songs. This time around, there’s an overwhelming sense of coming of age and a huge amount of wisdom and heartache to be found in lyrics which are more narrative than ever before – “I slept through July / While you made lines in the heather / I was old news to you then.”

‘Helplessness Blues’ arrives half way through the album. Soaring, building, elegant and fine; it’s a daintily crafted, touching piece which, as the leading single from the album, has done an exceptional job of stirring interest and reminding people of just what it is that Fleet Foxes do. With the exception of perhaps ‘Battery Kinzie’ however, there are no instant ‘singles’ on this record – even ‘Helplessness Blues’ wouldn’t necessarily have been an obvious choice for a first release. The songs are crafted to be heard within the context of the whole album, and within such a context, they work very, very well. The whole piece sounds confident, made with wisdom and talent far exceeding the band’s years. Although it’s a shame to constantly compare a new album to its predecessor, when the previous album is revered to the extent that Fleet Foxes is, comparison is inevitable and this album isn’t as instantly engaging as the last. It’s a record which commands attention if you want to experience all it has to offer, and in that respect, is a definite grower – each track becomes more and more endearing with every listen. The rich harmonies are there, the intricate melodies are in tow and meticulously moulded lyrics line every twist and turn of the tale.

‘The Cascades’ leads us away from ‘Helplessness Blues’ – a glistening, subtle interlude of a track which trickles into the opening drum beat of the captivating ‘Lorelai’. The final song of the collection is ‘Grown Ocean’, filled with a softly driving drum beat, trilling flutes and rich, engrossing vocals which bring the album gracefully to a close.

Nobody sings the blues like Fleet Foxes, who, with this latest album have proved beyond all argument that they are the masters of the emotive crescendo. It’s a beautifully crafted album, with achingly reflective lyrics and a warmth to the harmonies that could melt an iceberg. Whether Helplessness Blues will enjoy the commercial success of its predecessor remains to be seen, but for now, let’s just enjoy Fleet Foxes for what they are, safe in the knowledge that with every spin of this album, they’re proving that their music is as strong and sublime as ever.