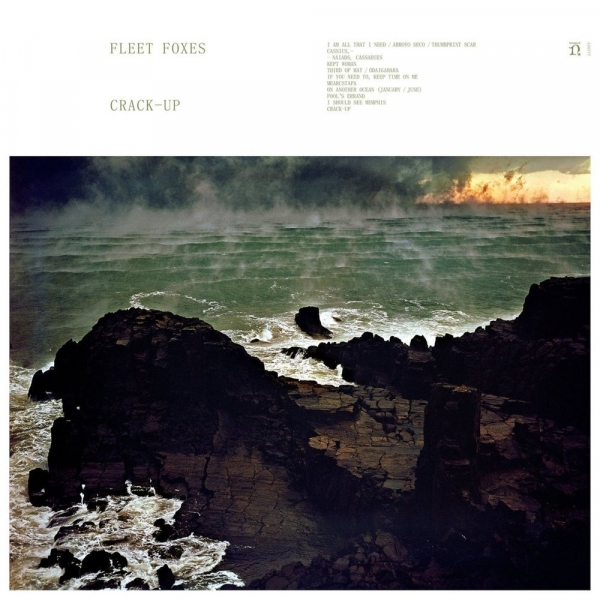 In a recent interview, Fleet Foxes frontman Robin Pecknold enthused about a brief snippet from the Pet Sounds sessions, featuring the moment when Brian Wilson’s lonesome voice is suddenly joined by massed Beach Boys harmonies. This obscure reference to one of the revered masters of lush, multi-layered studio opuses gives a useful indication for what to expect from Crack-Up, the band’s third album, and first since 2011’s Helplessness Blues.

When the touring behind Helplessness Blues (the recording process for which was reportedly a tortuous marathon in search of elusive perfection, leading to drummer Josh Tillman to quit to focus on the sardonic soft-rock of his Father John Misty persona) concluded, Pecknold seemingly retired from music. He emerged again last year for some low-key solo acoustic support slots for Joanna Newsom. In the interim, Pecknold had moved from his native Pacific Northwest to New York to study literature and music whilst Fleet Foxes gradually shrunk to a core three-piece of Pecknold, bassist Skyler Skjelset and multi-instrumentalist Casey Wescott.

These changes show up in different ways on Crack-Up. The album is titled after an essay by F. Scott Fitzgerald, and classic literary references crop up in the song titles and the impressionistic lyrics that occasionally defy any sort of clear interpretation, although themes of unease, self-doubt and regret at past action/inaction seem to permeate much of the material. It’s probably telling that the lyrics are full of (unanswered) questions: these are not songs that are prone to easy solutions. Musically, Crack-Up suggests a more analytical, fractured and experimental approach than the relatively straightforward (if painstakingly executed) band-playing-in-a-room natural feel that's dominated on past releases. Recorded in a piecemeal fashion in a number of US locations, the initially almost overwhelming array of stimuli - rich range of instrumentation, samples, unconventional song structures, found sounds - that nods towards every visionary studio wizard from Brian Wilson onwards seems to suggest both a fresh start via a clear break from past working practices and the bustle of the huge metropolis Pecknold now resides in.

It doesn't always work. Crack-Up enters a bit of a lull after the halfway point, although the throwback to the soaring melodies of the band's self-titled 2008 debut on "Fool's Errand" and the pensive, brass-enriched title track that concludes the record both impress a great deal. When the material isn’t totally convincing, the ornate orchestral arrangements can grate. At its worst, all the painstakingly administered window-dressing distracts from the substance of the material, rendering a few tracks pretty but somewhat detached, distant and empty of meaning. The brief snippet of Mulatu Astatke's languid, loose and vibrant Ethiopian jazz (from the brilliant Ethiopiques series) at the end of the slippery "On Another Ocean (January/June)" was almost certainly not included to highlight how stilted and overworked Crack-Up's complex creations sometimes sound in comparison, but that is its unintended effect.

The ambitious multi-piece suites can both impress and annoy, depending on the mood of the listener. The turbulent six-minute opener "I Am All That I Need/Arroyo Seco/Thumbprint Scar" keeps sputtering to a stop due to Pecknold's muttered asides that interrupt the track's fearsome momentum (Fleet Foxes’ music has been described as gentle, but there’s absolutely nothing laidback about the track’s jet engine thrust), built on a frantically strummed acoustic guitar and a swirling Middle Eastern string motif. The different sections - including a deeply moving vocal melody towards the end that fades away far too soon, almost as if Pecknold was conscious that critics might roll out the absurd accusations of his music being 'twee' if things got a bit too pretty - don't cohere quite as seamlessly into a unified whole as past attempts to weld disparate tunes together, such as the title track to Helplessness Blues. For the most part, though, the attempts to navigate these unpredictable twists and turns makes for a compelling listen.

The irony of all the multi-layered tinkering and decorating is that the fewer extra elements there are to distract from Pecknold's songwriting and voice (often coated in reverb and frequently joined by those familiar harmonies), the more powerful Crack-Up becomes. Anchored by Skjelset's muscular yet nimble bass lines (one of the defining features of this album, and subject to a tribute in the justifiably epic "Third of May/Odaigahara" which manages to sound simultaneously plush and thrillingly impromptu, a celebration of friendship to counter the opener’s ode to self-sufficiency), "Naiads, Cassadies" places the song's troubled themes of self-doubt in a winningly loose, live-sounding frame.

Even that is virtually a symphony next to the album's two stripped-back highlights. First aired during those Joanna Newsom support sets, the mysterious, ageless-sounding "Kept Woman" - now starring piano as the central instrument, with Pecknold's finger-picking keeping up a steady pulse in the background - is almost impossibly beautiful, with subtle hints of Nick Drake and Roy Harper as well as much, much older folk song forms, and a sparse but stunningly evocative arrangement; when the lyrics talk about ‘’cinder and smoke floating in the air’’, the piano emits a flurry notes that does a pretty impressive job of mimicking the movement of sparks rising off an open fire. The minimalist "If You Need To, Keep Time On Me" - little more than stop/start strums, before the all-too-brief track dissolves into a brief abstract coda of static and hiss - is just as potent, with a yearning-filled melody that sounds like it's been drifting in the atmosphere for centuries, just waiting to be plucked by a musician whose antenna is tuned to a frequency that allows for the appreciation of pure, unadorned beauty.

Crack-Up concludes with the sound of footsteps going up a stairwell and a door being opened. It’s a suitable metaphor for the album: on first encounter, the challenging nature of much of this music may come across as a bit forbidding, especially considering the bucolic and approachable music associated with past Fleet Foxes releases. The listener may well wish they had some kind of a key or code to open up the contents of Crack-Up. Apply a bit of patience, however, and this challenging, expectation-defying, flawed but ultimately rewarding record is likely to prove worth the effort.