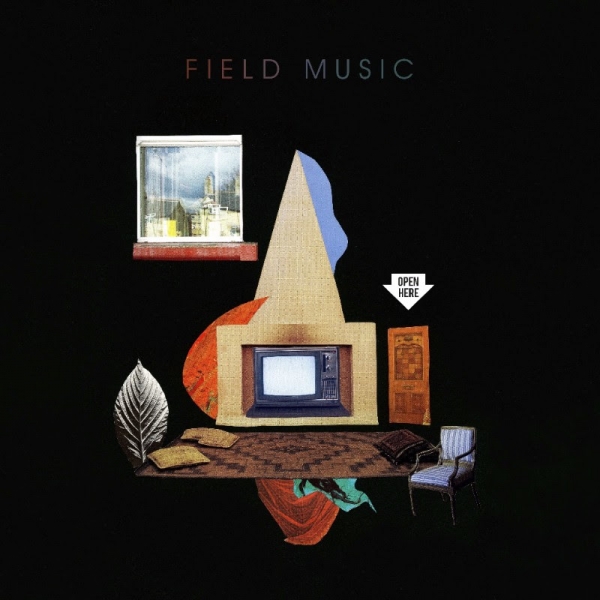 It seems likely that ten or twenty years from now people will look back at popular music from this specific period to see how so different artists dealt with the disillusionment and turbulent change that have become such prevalent themes as we trudge through the muck of the late 2010s.

Of all the bands that would choose to dance themselves clean in such times, Field Music have become one of the more pleasant and rewarding surprises. Peter and David Brewis have been honing their musical sleight-of-hand techniques over more than ten years and six albums together, executing sly maneuvers without relying on excessive flash to pull the coin out from behind your ear. Since as far back as their self-titled debut, Field Music have used concise arrangements to keep their latent longhair impulses in check and make agile guitar pop out of knotty prog. Getting on the good foot with their last album, Commontime, one of the primary directives on Open Here is to make room on the dance floor for flutes and horns as well as strings and saxophones. There’s no instrument too prim that the Brewis brothers can’t work it into a groove.

Open Here seeks an audience of open hearts and minds. “Count It Up” turns an ‘80s synth strut into an opportunity to ask those who can move freely around the Western world without facing discrimination to consider how society might be working in their favor. Maturity has suited Field Music from their infancy, and parenthood, as it has a way of doing, adds another dimension to their pragmatic love songs. “Share a Pillow” stomps, squeals and sighs the saga of a child who can’t get to sleep. “No King No Princess” reassures that child that “You can dress up how you want/And you can do the job you want” as brass and bass confidently twist up and stutter step. Open Here turns out to be an unlikely kind of funk record; one the whole family can listen to together.

Not every moment is beholden to the beat. The exquisite title track and climactic “Find a Way To” find Field Music in a vintage chamber pop mood, “Cameraman” in a pensive one. The compositions tend to be a touch more robust than on Commontime by design, though the album’s tracklist and length are notably shorter. Notified that their longtime recording space was going to be lost to development, reinforcements were called in to send the studio out in style and leave their mark on the album, casting a light of last hurrah and renewal over the process. It is characteristic of the Brewis’ distinct methods that Open Here can feel so cumulative yet still reinventive.