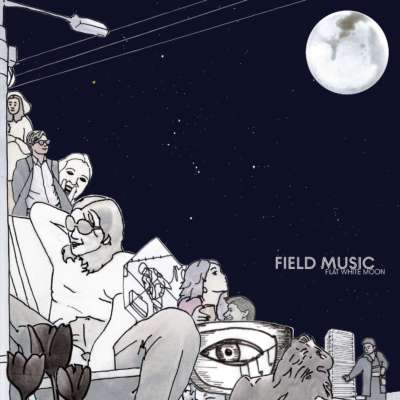 In a review of Field Music’s Making A New World last year, it was said that “Field Music have always made dictionary-definition art-pop, indebted to all of the giants of the genre.” While this new album, Flat White Moon, still has many of the same noticeable influences and stunning base sounds as their previous work, it appears as though the Brewis brothers are trying their hand at something different.

Rather than their regular conceptual rock, Flat White Moon is much more what you might think of as ‘soft rock’, or perhaps ‘classic pop’. They’ve dialled down most of the rubbery stretches of obtuse oddball funk - gone are the strange instrumental left-turns, and in (in a big way) come huge hooks (even by their impressive standards), infectious Beatles melodies and vast swathes of droopy-eyed low-pressure atmospherics.

First and foremost, this is a joyous album - a rounded and bouncy and buoyant one. One that indulges your '70s pop sweet tooth, laying on layer after sticky layer of 10cc treacle, Chicago syrup and Wings-y jam. From the haunting vocals and thunderous percussion of the opener “Orion From The Street”, through the McCartney-esque “When You Last Heard From Linda”, to the trademark Field Music skronker “You Get Better”, the band flex their muscles and run through a variety of different styles.

“No Pressure” is heavy and arched and pointed like prime era Peter Gabriel, whereas “In This City” sounds like pop-era Genesis. “Not When You’re In Love” is romantic, sensual and thoughtful in its mellow grooves, while “Meant to Be” opts for a weird, disorienting rhythm (not a million miles away from early '80s Beefheart, in all honesty.)

Of course, none of these comparison will come as surprises to long-time fans, but this newly-found, more relaxed approach will be especially pleasing to those who’ve been with them since the beginning. If you’re new to Field Music, there are better places to start (those would be 2007’s Tones of Town or 2016’s Commontime), but if you’re curious you could do much worse than beginning with this gem of a record.