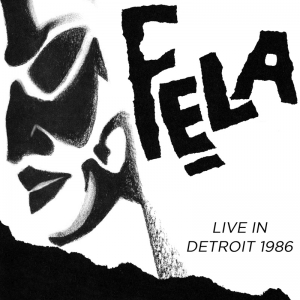 These days, rebellion in music often constitutes idiotic stunts with various offshoots of intoxication, and any political commentary is a carefully-plotted part of the publicity campaign for some new product. Fela Kuti (1938 – 1997) was the real deal, forever railing against the repressive actions of various military-led governments in his native Nigeria, and paying a heavy price for his troubles. This 1986 performance at Detroit’s Fox Theatre was recorded on a US tour that was delayed by two years due to Fela’s imprisonment on bogus charges – a good example of the harassment, beatings and generally extremely unpleasant hassle he was regularly served by the Nigerian authorities.

Crucially, Kuti had the sense to marry his political activism to some of the most intoxicating music ever created. As the bandleader of first Africa 70 and then Egypt 80 (featured here), Fela played a key part in cooking up the hugely influential polyrhythmic nirvana that is Afrobeat, a hypnotic blend of James Brown’s sweaty funk, loose-limbed African rhythms and the boundless exploration of jazz that – together with Fela’s incendiary lyrics and sloganeering – created some of the most successful protest songs in existence.

As such, the first official release of this much-bootlegged live recording from November 1986 (the first new Fela produce since 1992’s Underground System) is a drool-inducing prospect. Get past the amazingly vibrant opener, call-and-response epic ‘Just Like That’, however, and a problem emerges. Fela and his orchestra are on nothing short of top form here, but they appear to have lost any sense of proportion when it comes to the time it’s decent to dedicate to a single groove. Live in Detroit 1986 comprises four tracks: the double CD clocks in at 140 minutes. This might seem like a daft criticism of an artist whose album tracks often clocked in at 20 minutes each, and one whose Best Of compilation contains 10 minute edits. But do the maths, and it’s obvious we’re in for a very long haul indeed here.

The marathon workouts don’t matter one bit as long as the raw materials at hand are strong enough to withhold such extended exposure: ‘Just Like That’ goes on for a neat half an hour, but could easily double that without anyone objecting. Likewise ‘Teacher Don’t Teach Me Nonsense’ – not one of Fela’s most infectious cuts, perhaps, but sweet enough to sustain interest for 25 minutes. Problems start when the proceedings move to selections from Fela’s B-list. The tracks here are drawn from his final studio albums (all tunes were still unreleased at the time of this performance – Fela didn’t do “the hits”). Even the biggest Fela fanatic would hesitate to claim this was the most fruitful phase of his career, with the razor-sharp grooves of the legendary 1970s cuts giving way to a looser, less hook-laden approach that at times struggled to build a compelling momentum. Governments rise and fall, fashions change, tectonic plates move several inches towards each other: Fela and his band are still working their way through the 40 minutes of ‘CBB (Confusion Break Bones)’.

This slow-burning jam must have been thrilling to witness: the excitement of the audience is palpable. Taken in at a 25 years’ remote, though, and it’s hard not to feel similar frustration as with, say, live Neil Young guitar solo epics at their least inspired. You can half-imagine members of the band struggling with their conscience, trying to decide whether or not they’ve the courage to suggest that the boss moves on to the next tune as this one’s well and truly exhausted.