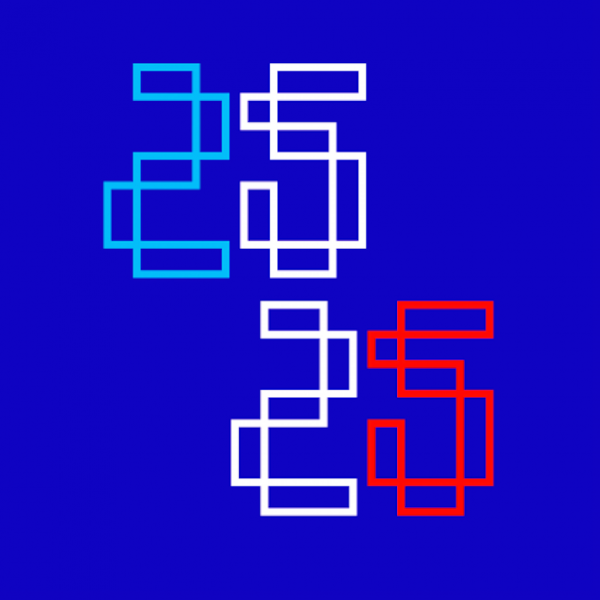 Adaptation allows an organism to improve its ability to live in its habitat. Within their new habitat of late-night club shows, Factory Floor have adapted themselves in order to thrive within their new environment. 25 25 is the pulsating and excellent documentation of the two-piece’s adaptation.

Although 25 25 signifies another chapter within Factory Floor’s constant evolution - from playing later at night, to the departure of Dominic Butler and the exploration of novel, analogue technology - the intrinsic DNA that characterises Factory Floor, undeniably persists on 25 25. Born from the live experimentation that underpinned much of their eponymous début record, 25 25 showcases the nocturnal work Factory Floor have been honing, during late-night sets as a two-piece with their army of machines, both analogue and digital.

The result of their sonic and technological exploration, is a record that is simultaneously both minimal and maximal - persistent and pounding, yet also subtle and diaphanous. Nik Colk Void and Gabriel Gurnsey act as sonic anatomists, performing a skilful dissection that reveals a skeletal, rhythmical framework of sequenced drums, squelching acid basslines and percolating synthetic bleeps.

At its peak, propelled by its enduring thump, 25 25 undoubtedly holds the listener in a prolonged state of attentive euphoria. Lead singles, “Dial Me In” and “Ya” serve as prime examples of the joy that exudes from 25 25, with their hyper-glossy, meme-like vocal samples. Apart from almost hearing the soul of apathy itself in the excellent “Ya”, its tongue-in-cheek sample signals the deconstruction of Factory Floor’s use of vocals. And while the majority of the record is similarly minimalist in its arrangements and instrumentation, the rhythmical tapestry of live drum-fills, throbbing beats and acid basslines act as maximalist weapons targeting dance-floors across continents.

The dichotomy between minimalism and maximalism is not, however, the only juxtaposition the record provides. Factory Floor present a record that paints with not only vivid, primary colours (found on the likes of “Meet Me At The End”, “Ya” and “Dial Me In”), but also with darker shades in tracks that menace with bubbling, claustrophobic low-ends. Album standout, “Wave”, prowls proudly before unleashing pleading, morse-code synthesisers. Likewise, the incongruously titled, “Slow Listen”, haunts with spectral vocal samples amongst its post-industrial groove.

There is a hypnotic subtlety to be found hidden within the ultra-minimalist design of 25 25,  especially within the delicate synth lines that exist on the record’s more restrained moments. The title track, for example, delights with a series of synthetic, alien samples, interwoven within a fabric of snare cracks and mutating arpeggios that continually arouse through multiple transfigurations.

25 25 however dangerously flirts with self-indulgence and inattention. Although they convey several pleasing sonic ideas, “Relay” and “Upper Left” are 25 25’s most patience-testing moments. “Relay” aimlessly meanders, whilst “Upper Left”’s cascading toms and intersecting vocal samples do not provide the euphoric conclusion 25 25 rightfully deserves.

25 25 slithers through the auditory canal, hypnotising and beguiling the listener, before finally ensnaring those who choose to listen. Once trapped its pneumatic thump submits the listener into Factory Floor’s unyielding will. It is a record with delights at times so irresistible it physically moves the listener. With their adaptation proving so successful, it’s evident Factory Floor will significantly thrive within their new environment.