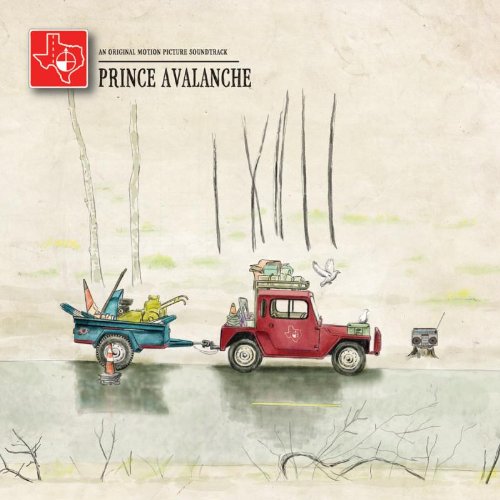 If you cut a slice out of forthcoming film Prince Avalanche, it would read “Texas” through and through like a stick of rock. Director David Gordon Green (George Washington)was raised in the state, while those responsible for the soundtrack – Green’s long term collaborator and composer David Wingo of Ola Podrida and post-rock veterans Explosions In The Sky are also natives of the lone star state.

The film is also, of course, set in Texas, and it seems sharing background and experiences have had a hand in creating something bespoke Texan for our eyes and ears in the form of Prince Avalanche: An Original Motion Picture Soundtrack.

Not having seen anything of Green’s film (other than the trailer and a few clips) it’s hard to say much about how the music works within it, but reviews point to something of a return to form for the director, who began with two brilliant coming-of-age movies in George Washington and All The Real Girls. If you’ve not seen either, the former is very good indeed but I implore you to see the latter for truly touching performances from leads Paul Schneider and a young Zooey Deschanel in her best role to date. Green then turned his hand to stinking the place out with awful slop like Pineapple Express, Your Highness and The Sitter, seemingly acts of self-sabotage inspired by smoking too much weed. But to return to All The Real Girls, this was the film which began the relationship between Green and Wingo; the loose nature of the filming matched perfectly with Wingo’s light and contemplative score creating something rather special. And I get the feeling that Wingo and Green have got it right again with Prince Avalanche, with the help of course of Explosions In The Sky.

I’m contractually obliged at this point to mention that despite being described as “cinematic” in probably every review ever, EITS have only ever actually scored one film soundtrack, contributing the music for Friday Night Lights, which was later adapted in to a TV series in the US. So the overwhelming expectation from fans of the Texan quartet’s music probably won’t actually be met by the music on Prince Avalanche: An Original Motion Picture Soundtrack as it’s not quite your typical post-rock experience. In fact, it’s Wingo’s influence – a distinguished composer with a series of fine Americana/chamber pop albums under his belt as Ola Podrida – that guides many of the tracks, and it’s perhaps fair to wonder exactly where EITS actually are here. But if we dig a bit further and read the words of the band’s drummer Chris Hrasky, we’re probably looking at the next chapter in the band’s career. Just as Mogwai left the quiet/loud dynamics behind after becoming bored of the formula, EITS are stepping away from their signature sound to something more thoughtful and subdued – if their previous work was about the vastness of their home state, then Prince Avalanche is the muted character study of individuals and small settlements previously ignored by the outside world (Prince Avalanche is, after all, a story of two men painting a highway).

The tone is set not by buzzing ambient opener ‘Fires’ but by second track ‘Theme from Prince Avalanche’: it begins with woodwind and is quickly joined by airy piano keys and acoustic guitars. It’s unlike anything EITS have turned their hand to in the past. That woodwind motif returns in ‘Madison’, accompanied by shimmering guitar chords, and continues through ‘Passing Time’ whose plaintive notes are enhanced by plucked strings. The open piano chords of ‘Rain’ are deeply sad and short, but ‘Alone Time’ follows as a more expansive track and reveals a little more of the Explosions we’ve come to know over the past 14 years. It’s a layered, ambient build around insistent piano, burbling electronics and harmonic sighs, leading to a gently euphoric conclusion. ‘Join Me On My Avalanche’ is a slightly more powerful revisit of the former, pushed along by Hrasky’s drum rolls and closing track ‘Send Off’ concludes matters on uplifting horns, a kind of brass replacement for the band’s usual coruscating six-string assault. If this is a pointer to a new direction for Explosions In The Sky, then it’s something they should certainly be pursuing.

All this talk of EITS should really not be at the expense of ignoring David Wingo’s contribution; it’s bad enough that his work with Ola Podrida is somewhat ignored by the wider public, so we can’t let what he’s achieved here go unnoticed. His delicate composing guides the band through the touching ‘Hello, This Is Your House’ – one of the highlights of the soundtrack – and the heady, trembling atmospherics and cyclical piano of ‘An Old Peasant Like Me’ without a misstep. Wingo has an uncanny knack for knowing where the music should head next, and what pace it should head there at.

If David Gordon Green can get performances this good out of Prince Avalanche stars Paul Rudd and Emile Hirsch then he’s on to an absolute winner – Explosions In The Sky and David Wingo are already there.