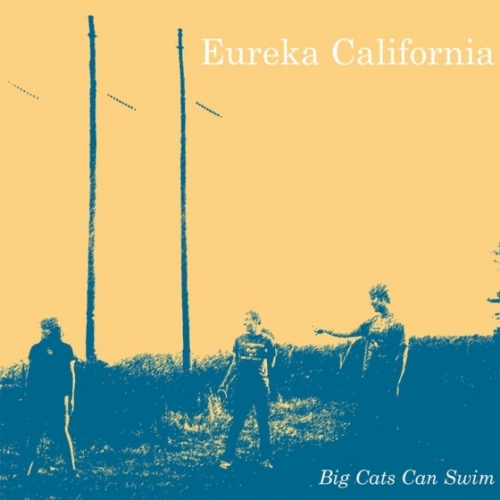 Here we go again. Yet another band doing that whole ’90s thing; revivalists for a culture they were barely old enough to notice in the first place. More photocopies of a photocopy of a photocopy. Rough edges now faded to a thin, lifeless facsimile. The product of a generation with so little to say that it’s taken to slavishly imitating the generation that made a virtue of having nothing to say.

No wait, sorry, wrong review. Fuck, I should stop typing before listening to the record, right?

Well, ok, there’s a definite whiff of the 20th century’s final decade about Eureka California – specifically the clattering super-shonk of acts like Guided By Voices and Pavement – but the lines are far from greyed-out. Big Cats Can Swim is wide-screen, high-definition magnificence; brightly cheerful and thrillingly instant. The product of kids who know there’s no new shades on the spectrum, but are determined to have a blast mixing the colours.

It helps that they’re not limited to that decade. There’s a McCartney-esque melancholy to the swirling, ominous psych-folk of ‘My Kind Of Battery’, while tracks like ‘I Will Control The Nation’ could be kissing cousins to the ongoing deluge of surf-inflected noisepop bands with “beach” in their names (you know who I mean). Their sense of history goes deeper than the roots of indie rock, but there’s certainly a place for them in the zeitgeist, if they want it.

Eureka California have two major pluses going for them: hooks galore and an infectious air of FUN to every single one. ‘My Boy, Black Metal’ rides roughshod over a gently pretty melody, while singer Jake Ward snarks affably about church-burning and make-up. Then there’s the joyfully knock-kneed ‘Bite By The Sand’, which takes Built To Spill’s way with a woozy guitar line and bowls it awkwardly into an echo chamber.

The highlight, however, is the kinetic immediacy of ‘The Day No Trains Ran’: the band make like a stripped-down Olivia Tremor Control covering Archers of Loaf’s ‘Might’, powered simultaneously by the purposeful drumming of Marie Uhler and a shared energy that drizzles down from the speakers, straight into the listener’s feet. Ward hollers “it was a ticker-tape parade,” and the overall effect is so goddamn euphoric you can practically feel yourself in the motorcade; innumerable strips of paper clouding your vision whilst gently caressing your skin. Heroic. Triumphant. Wonderful. It’s the sort of trick you wish pop music would pull off more often, though it rarely does.

Sure, it’s indebted to things that have gone before. But Big Cats Can Swim works precisely because it doesn’t just pull from a single strand of “classic” indie rock. Instead, Eureka California blow affectionate kisses in the direction of their favourite ’90s acts whilst blissfully painting pictures that may look familiar, but are very definitely their own. One of the most enjoyable albums of 2012.

Listen to Big Cats Can Swim