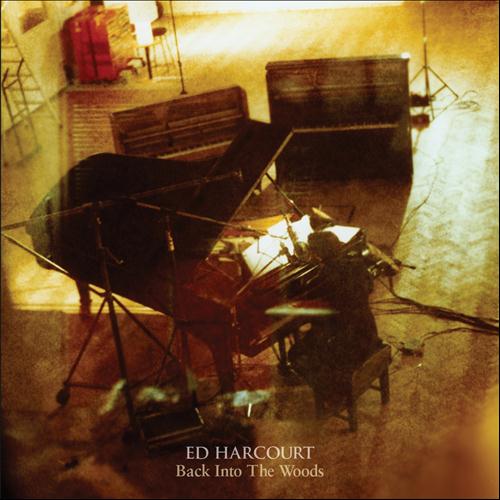 Back in 2001, with his Mercury Music-nominated debut Here Be Monsters and allegedly hundreds of songs stashed away on a tape machine at his grandmother’s, Ed Harcourt was heralded by some as the next Jeff Buckley. Over a decade later, and 5 albums already under his belt, this quintessentially English songwriter remains under-appreciated in his own country, apparently always on the “cusp of the wane” he’s singing about on his latest album Back Into The Woods.

Along with his songwriting and supporting work with a diverse range of other artists (Paloma Faith, Lisa Marie Presley, Ren Harvieu, Josh T. Pearson), in his own career, there’s been a steady stream of releases since the debut in 2001, 2010′s Lustre showing no let up in Harcourt’s creativity and ambition for songwriting. His albums often a free-spirited sprawl, from basic piano arrangements through to fleshed-out anthems and complex orchestrations with some great pop tunes along the way. The one constant seems to be the need to keep things sounding fresh and interesting.

For Into The Woods, Harcourt took a bunch of his new songs to the legendary Abbey Road Studios last year, and just played them straight, accompanying himself on piano or guitar with very few extras. He wrapped the whole thing up in about 6 hours, and while there’s a temptation to treat the album as a practice-run for the real thing, there’s a certain charm in all this simplicity. Play the songs over and over, and they open up, revealing the songwriter’s poetic and philosophical state of mind.

‘Hey Little Bruiser’ is a sprightly opener set to the simplest of piano arpeggios and the songwriter’s characteristic neat turn of phrase. Harcourt gazes in wonderment at the child in front of him, at first admonishing himself for not being a good father before naturally offering up some good fatherly advice: “Let no man be your keeper, they have secrets in their lives/Where would we be without the dreamers, pay no heed to good advice?” The album plays out in a similar way throughout, Harcourt like a soul in torment. The character in ‘Wandering Eye’ “strays too far from the flock/Always going to where the grass is greener” and has a “potential for violence”, while the main protagonist of the title track feels disgraced and goes “back into the woods again” where he feels “the wrath of mother nature” and has “visions of Saint Bernadette”. Harcourt’s lyrics are poetical and allegorical, but it sounds like the pain’s really quite personal.

The guitar on both ‘Murmur In My Heart’ and ‘Last Will And Testament’ changes the musical tempo of the album if not the mood. There are lovely dark shades of Hank Williams or Johnny Cash in this old-time country-blues. ’Brothers And Sisters’ is more grandiose, and the grandstanding piano would probably benefit from more ambitious production, as the siblings described look out for each other until “All the wolves are circling looking for an easy kill.” On ‘The Man That Time Forgot’, he’s asking for forgiveness with even more regret and remorse. ’The Pretty Girls’ offers about the only ray of sunshine, but with an ironic parting shot that “pretty girls always fall for the baddest boys”.

At 9 songs and about 35 minutes long, this is almost a mini-album by Ed Harcourt’s standards. After all the soul-searching, he ends things on a more philosophical note, with ‘The Cusp And The Wane’, whose lyrical prowess is a fitting signature tune for the album:

In the same way that resistance fighters would hide from Nazis in the woods during WWII – the Germans too petrified of those dark places to seek them out – Ed Harcourt too seems to be dealing with a few demons of his own on Back Into The Woods, but this collection of world-weary songs also beats with a poetic heart of longing. It’s a shame that this underdog of British music is unlikely to receive the recognition he deserves any time soon, but his latest album at least gives him a nice breathing space to keep the songs flowing until the next cusp and wane.