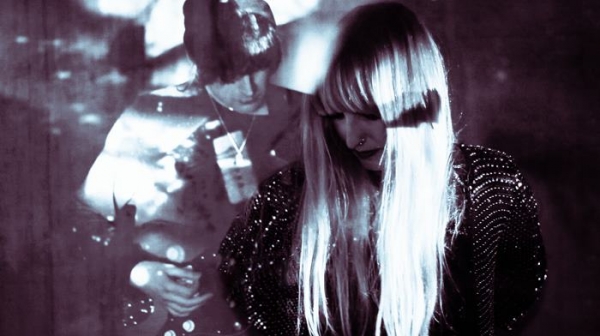 This debut finds Echo Lake throwing a rather extraordinary sonic party; Beach House, the Cocteau Twins and My Bloody Valentine wander in and out and we’re sat propped up against walls in silence with totally blissed grins on our faces. Guitarist Thom Hill and lead singer Linda Jarvis plus band conjure up a graceful storm, and it’s as if nothing and everything happens all at once. And you’ll never want to leave, because once you’ve heard these ten tracks the outside world will seem like a painfully noisy, pointless irritation compared to the ethereal kicks you could be having with this London-based bunch.

Wild Peace doesn’t actually start as such, it’s breathed and whispered into being; ‘Further Down’, the first of a stunning set of swirling, dreamlike shoegaze epics, that slowly slides into focus propelled by crunchy riffs and sighing vocals. Is there an air of menace to it too? We’re one track in and already too numb to tell. ‘Another Day’ is a more precise, straightforward pop follow-up, all lovely rattles and nagging guitar lines that follow its haunting melody, before the title track sees Echo Lake build on their sound, adding more and more layers before filtering it all away again to nothing. By this point, and having not yet put a foot wrong, the band somehow get even better.

Now there’s something strangely comforting about the fact that we can’t actually make out what Linda Jarvis is singing about so prettily on this record. Tales of pure horror, or ponies: we’re none the wiser, but on ‘Even The Blind’ we get our first glimpse into her mind as she invites us to “go outside tonight and look at the sky” before closing with the track’s infectious mantra of “even the blind can see”. Still not making much sense to us, admittedly, but it’s a bewitching sentiment and as the lo-fi, clipped rhythms and riffs creep and shimmer, Wild Peace really picks up the pace, the band driven by more thrilling momentum than previously.

‘Monday 5AM’ is a short but breathcatchingly elegant instrumental break before the Girl Group stomp of ‘Young Silence’ and ‘In Dreams’’ elastic basslines and attacked guitars kick in, and these are about as thrashy and discordant as Echo Lake get; showing a different but just as remarkable side to their hypnotic sound. Its main draw is, of course, Jarvis’ sumptuous vocals, but Thom Hill puts in a spectacular performance later too: ‘Last Song Of The Year’ seeing him tear out a spiralling solo worthy of John Squire’s early masterpieces and ‘Just Kids’ providing a platform for another corker to close the record.

Every so often a debut comes along so full of elegiac beauty that you can’t fail to fall for everything about it. Wild Peace is this year’s addition to the list. Prepare to be enthralled.