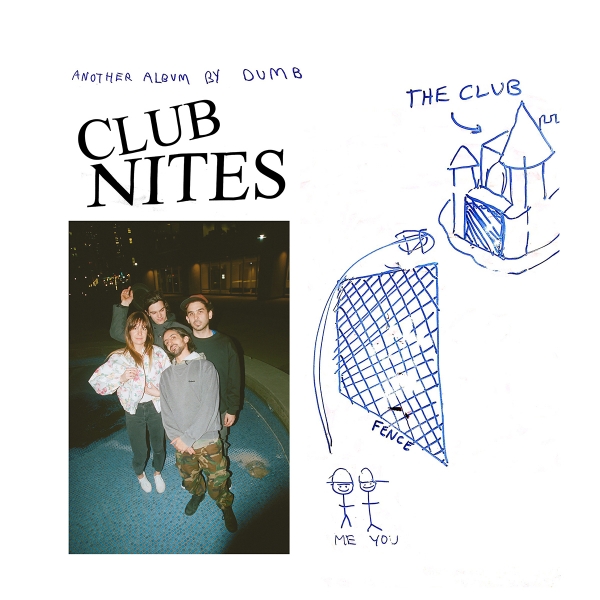 Despite it being a typical post-punk trope, there are few bands that have incorporated a breathlessness in their music quite as wholeheartedly as Dumb.

It’s an approach that became most evident on their 2018 debut, Seeing Green, a record that took the dense indie post-punk of Parquet Courts and Omni, and, over the course of 14 songs fired it directly into the face of its audience. Vocalist/guitarist Franco Rossino’s irreverent barking was aptly backed by a rhythm section careful to keep everything intensely tight and mechanical. The release of “Beef Nights”, “Club Nites” and “Content Jungle” indicated to there being very little in the way of change, an allusion that the new record now all but confirms.

Featuring a series of narratives themed around the club night ecosystem, the Canadian quartet storm through 14 tracks in a tightly-woven assortment of almost motoric performances. At its best, the result is a disorientating and enthralling malaise of sound. The eponymous track, also the opener, is a cynical and sardonic take on a typical club night, lodging references to events such as buying rounds and being sick in the sink within the jungle of guitars and drums.

“Don’t Sleep” meanwhile takes a slightly darker turn, depicting a character who is “out of money, acting funny and you’ve got no friends”, still framed within the record’s relentless take on post-punk. Intriguingly, one of the standout songs, closer “CBC Radio 3”, is a much slower, more refined take. Retaining the nightclub vibe, lyrics such as “never told you just how nice it was to see you in the mirror” have a ring of sentimentality to them, reflecting a more considered side to Dumb.

Club Nites isn’t a total success however, primarily due to the notable drop in quality throughout most of its second half. “Fugue” and “Columbo” in particular devolve at times into a state of erraticism that detract from the more effective urgent orchestration elsewhere. Rossino’s vocals are also consistently quite low in the mix, something which, while contributing to the overall aesthetic on the album, on these occasions results in it just getting lost in the noise.

Even rushing through the time between songs so as to maintain momentum, the endless energy and refusal to stay still is admirable of Dumb. Unfortunately, the pace results in some items ultimately being left undone.